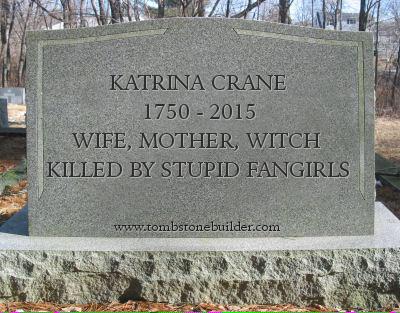 Did you know that “stupid fangirls” and “petty Crabbies” killed Katrina? These “loud,” “louder” and “loudest” “Ichabbie” fans are the problem.  Sidenote: I need someone to explain to me why the word “loud” is always used to describe Abbie loyalists. Can one be loud on Twitter? Are you Tweeting in all caps? (Stop it!) Did someone invent an audio version of Twitter and forget to tell me? If that’s the case, I’m not going to waste time composing Tweets when I could holler at you in 140 characters or less. Perhaps there is only a miniscule amount of Katrina devotees. Either that or the legions of them can’t speak above a whisper, which kind of makes sense….

Here’s an interesting Tweeter’s opinion, “They [meaning the show] were so afraid of the race issue they let the racists decide the show. Now Sleepy Hollow is dead as Katrina.” Hmmm “racists” are responsible for Katrina’s death? Where is Rosa Parks when you need her?

“Ichatrina” was never a thing. It was white and gold, an optical illusion. Katrina served two purposes. As an unwitting time-traveler, it was vital that Ichabod have something to tie him to the past. Katrina’s other purpose was to give the leading man a heroic mission. She was simply a sought-after object like the Lost Ark, the Holy Grail, and the Ice Princess. The primary relationship was, is and always will be Ichabod and Abbie. Getting Katrina out of Purgatory just began the process of a drawn-out and inevitable divorce — or stabbing — whatever’s easier. The show demonstrated that the end was nigh with subtle hints and sometimes anvils. 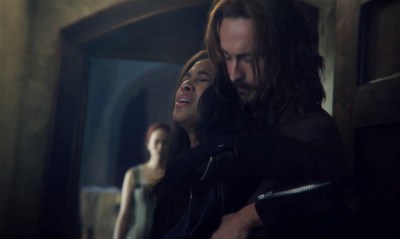 Ichabod comforts Abbie after Frank dies. Katrina’s in the background

The season one finale, “Bad Blood” was white and gold on the surface, but black and blue at its core. On their way to rescue Katrina from Purgatory, Ichabod reached out to clutch Abigail’s hand. The cameras focused on a close-up lingering shot of hand-holding. In TV land, that is a ship tease.

Upon his reunion with Katrina, Ichabod held her in his arms and wept tears of joy. Wait, no that didn’t happen. He charged in with that twitchy finger in motion and his first words were, “What do you know of the secrets of Washington’s Bible?” That wasn’t exactly a scene to make Ichatrina fans swoon. When Abbie insisted that she stay behind so Katrina could escape, we saw Crane’s passion. He pulled his Leftenant into an embrace and murmured, “I swear to you, for as long as I can draw breath…. Remember our bond.” There was hair-stroking, for crying out loud. Katrina was standing right there — even she could see that the dress was not white and gold. After that scene, it was delusional to think this was an epic story of the Crane romance.

Once they were out of Purgatory and Katrina was sprawled out somewhere by herself, Ichabod started telling Henry about how he planned to save Abbie. Um, hello, aren’t you forgetting something? When Katrina called her husband’s name, he finally remembered it was hug time. No husky whispers and hair-stroking, just a comforting hug. 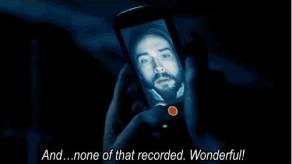 In the season two premiere, “This is War,” Abbie was still in Purgatory and Ichabod, buried in a pine box, recorded a message  … for Abbie. “If I do not survive, I want you to know, Leftenant, I never stopped fighting.” Presumably if he died and Abbie survived and found his body, he could have left a message for her to give to Katrina, no? Mrs. Crane was an afterthought.

The next episode was “The Kindred” and Katrina’s captor and former fiancé, Abraham pointed out the obvious. After she found out that Abraham had lied about Ichabod’s death, there was this exchange:

Katrina: Ichabod is alive… and free.

Abraham: And what did he chose to do with his freedom? Did he search the ends of the earth to find his beloved wife? No, he rescued another woman. Abigail Mills. Couldn’t stand to see her trapped in purgatory mere hours. And yet, how long did he leave you to rot there?

Abraham is many things, but he is not a fool.

In this same episode, a bank employee assumed that Abbie was Ichabod’s girlfriend. Random extras are shipping Ichabbie. None of that would matter soon because Katrina would be back in Ichabod’s arms. Except when he showed up to rescue her, she decided to stay and spy on Abraham, the Horseman of Death, and Henry, the Horseman of War, instead of trusting Ichabod. Abraham more or less told Katrina that Abbie was a threat and she still let her husband go off with Miss Mills. Are the Cranes shippable? Seriously? I guess that dress is still white and gold. 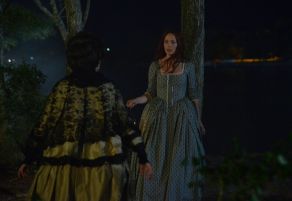 Mary had the last laugh

The  Ichatrina ship was heading for an iceberg in “The Weeping Lady.” For starters, Caroline (a delightful character who died too soon) was surprised to hear Crane had a wife. “You live alone, you never talk about her. [There are] no photos of her around. I assumed you were single or separated or a widower.” Just a matter of time, Caroline, just a matter of time.

When Mary Wells, Ichabod’s obsessive friend-turned-ghoul, pointed her finger at Katrina, he immediately questioned his wife (Where’s the trust?) and became furious when she kept  hemming and hawing.  He was pretty salty, when he said, “There’s something you’re not telling me. You’re hiding something. I will not leave until I hear the truth … from your lips. What in God’s name did you do?” Crane was disgusted by his wife’s story about how she covered up Mary’s accidental death and forged a good-bye letter. A fed-up Crane pointed out all of her lies by omission (spying for Washington, witchcraft, pregnancy.) After Katrina returned to Abraham for more “intelligence gathering,” Ichabod hit the bar with Abbie and mused, “Marriage is difficult on the best day. But without trust… without honesty… how can a union between two people hope to survive?” That was the Foreshadowing Fairy, the marriage was doomed.

Now, we get to “Heartless,” an episode which should have drove a stake through the heart of anyone still clinging to hope that the marriage was worth shipping. This is the episode that comes right after “Deliverance” when Henry used venom to impregnate his mother and… Oh, my God! Please do not make me relive that sordid affair. The bottom line is that once again Kat was saved by Ichabod and Abbie. So how does she repay her husband? When she’s not feeling well and he offers her something, she wants quince tea instead and has the gall to say, “It’s just… well, Abraham brought me some when I was ailing. It soothed my nerves.” Witch, please. Reminiscing about good times with the fiend who imprisoned you does not make you the romantic lead.

Later on in the episode, Ichabod talked to Abbie about his wife.

Ichabod: So much has transpired for us both. We’re not the people we once were.

Abbie: Crane, people change, especially during a war. They grow and evolve. It’s just that your relationship has to evolve, as well.

Ichabod: As must, I suspect, my opinion of Mr. Hawley. He is a brigand and a mercenary, but not without his charms.

Abbie: The hell are you talking about?

Ichabod: All I’m saying is if he were to explore a social relationship with… someone, I… I would certainly not be…

Abbie: Oh. (laughs) Uh, let’s say you’re onto something. You, of all people, know that there’s no room in our lives for complications.

Ichabod: And since when has opening our hearts to new possibilities been a complication?

During a hunt for the demon, Crane still wouldn’t let the matter drop and grilled Hawley.

Ichabod: Mr. Hawley, what are your intentions towards Lieutenant Mills?

Ichabod: The one thing you have in your favor is you are a man of your word. So, it would mean something if you were to tell me that your intentions are honorable.

Hawley: I don’t know what you’re talking about, but, whatever it is, I’m pretty damn certain it’s none of your business.

Even the Succubus could see what was going on, telling Ichabod, “I can sense your desire. It burns strong, even though you try so hard to hide it. And yet… the emotion in your heart has soured, hasn’t it? I know that taste. It’s the taste of doubt.”

The Cranes finally got a dream date in “Pittura Infamante.” This was Katrina’s night to shine and the show still got in a burn. Sheriff Reyes’ response to meeting Katrina: “Ichabod has a wife? He never mentioned you.”

Finally. we get to the end of the road, “Tempus Fugit.” Katrina tries to kill Abbie and it backfires. As Tom Mison put it in a TVLine interview, “He wants to stop her and he wants to defend Abbie. It’s just in the tussle, her knife goes into her heart. That’s my story and I’m sticking to it.”

Ichatrina was never going to be a thing, it’s as plain as black in white, I mean blue and black.

Whether that episode was the season finale or the series finale remains to be seen, but at the end of the day, the show decided that Ichabod would move forward without Katrina. “Stupid fangirls” and “racists” did not kill Katrina. The show took 19 episodes to make it clear, Ichatrina was never happening.

Have an opinion about this?  Please leave a comment. (They don’t appear immediately, but we’ll get to them.)