It’s Election Day, everybody picks a side. Katrina is free at last — yet still in peril because that’s pretty much her function on this show. Ichabod gets what he’s been pining for since the pilot and Ichabbie fans can just heave sighs and reach for the Tito’s vodka. Or maybe that’s just me.

So let’s just take a moment to talk about the beleaguered Mrs. C. Katia Winter’s got a thankless job. She spent a season standing around in flowing gowns issuing cryptic messages. While Tom Mison’s Ichabod and Nicole Beharie’s Abbie got to solve supernatural problems and exude chemistry. They became the Nick and Nora, while Katrina remained a pain in the Asta.

Getting Katrina out of Purgatory needed to be done. After a certain point, Ichabod would seem impotent if he didn’t make good on his promise to save her. Yet, here we are seven episodes in to Season Two and Katrina still doesn’t offer much rooting value. At this point, her role as Ichabbie spoiler is getting old. It’s time for Abbie to move on for a while so we can see just how strong the Crane marriage is when they have to be together in real life. In the meantime, give Abbie a love interest to act as the foil for a while. What will Ichabod do without Abbie always at his side? With that said, on with the show.

Dream On: There are two kinds of openings this show loves: A dream sequence or total fake out à la “This is War.” This time it’s an obvious dream: Katrina is in bed smooching Ichabod. Can’t blame her that. Too bad his face morphs into something ugly and the venomous spider from last week passes from his mouth to hers. In reality, Ichabod and Abbie are at the polls, he tries to follow her into the voting booth, which would have only fueled more shipping and that is just not going to happen in this episode, so give it up

At the polling place, Ichabod grouses to Abbie about low voter turnout.

Ichabod: Oh, but, of course, they’re more than passionate to vote for ‘American Idolatry.’
Abbie: ‘American Idol.’
Ichabod: I know its name. I’m telling you what it should be called.
Abbie: So, Colonial America was a golden age because everybody voted in the States? Oh, wait, black people couldn’t vote. Neither could women. So I would have been turned away at the door twice over.
Ichabod: Actually, you don’t own significant tracts of property, so… thrice over.
Abbie: Well, maybe I could afford property if I weren’t paying all of your bills.

Random Aside: What will the Cranes do when they’re reunited? Do they have any marketable skills? Wal-Mart can always use greeters, I guess.

On the Run: Look who’s in trouble again? Shocker, it’s Katrina! She’s sweaty and pale. Say what you will, Abraham seems like the kind of guy who will hold your hair back. Time for Henry’s scheme of the week. He barges in with some lackeys. Gotta say being Moloch‘s minion isn’t the worst gig in the world. Henry’s got a hefty expense account and quite a few interns. One henchman, a doctor of some sort, examines Katrina’s eye and declares that “everything is as expected.” Henry informs Abraham that Moloch has “a new purpose” for Katrina. Aside from being a spoiler for Ichabbie loyalists?  As Big Bads go, Moloch is pretty ineffective. None of his plots have panned out, Show, but okay…. As Katrina is doing the standard “Unhand me” schtick Abraham goes after her, but Henry thwarts  him with some magic which makes him shrivel and lose his head again. Wait, if the Horseman can’t tolerate daylight, what does that mean for Abraham. Can he just go apple-picking or whatever without repercussions?…. Well, Looky here, Katrina managed to knee a henchman and escape. She runs through the woods, now don’t be the clichéd girl who always trips over a root or something Whoops, too late. Anyway, she reaches a service station where she collapses into the arms of two men. That’s so Katrina…. At the polling place, Crane and Lieutenant Mills conveniently hear about a Jane Doe at Westchester General, she’s a redhead in colonial dress. Off they go. Katrina has a high fever and an infection in her abdominal wall. Health crisis be damned, at Westchester General they just let you walk away with some unnamed medicine and a sexy new outfit courtesy of the lost and found. Some drunk chick forgot to retrieve her tight-fitting jeans and corset. God forbid they find a cable-knit sweater. Boobs McGee must always have the twins on display. It’s in the contract…. The trio split up to evade Henry’s thugs. Mr. and Mrs. Crane head for the archives while Abbie follows them on her own. You’d think that after Corbin’s death, she’d get a new partner from this century, maybe it’s just not in the budget.

Ye Olde Clue: What episode is complete without a historical figure? Franklin’s notes mention a woman with Katrina’s symptoms, but the notes are incomplete. Katrina shares that Abraham said he knew nothing about this. Scratched record sound. Ichabod asks how a man without a head says anything. Mrs. Crane explains the Horseman gave her an enchanted pendant which allows her to see his human spirit. Ichabod gets pissy about this chit-chat. He’s kinda got some nerve what with all the murmuring and embracing of his “Leftenant,” but okay, Show. 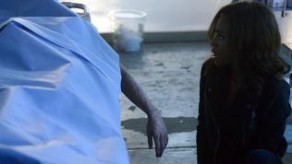 Even Katrina’s not this stiff.

A Bump in the  Road: Abbie follows the goons to a warehouse, finds a cadaver with veins that look like Katrina’s and a setup that looks like the gyno examining room from hell. Abbie swipes the doctor’s notebook and heads back to the archives. They figure that Katrina’s problem isn’t that she’s just ill, or always in distress, or a general pain in the ass. She’s pregnant. Hmm, let’s do the math: It’s been a couple of centuries since Crane has been with his wife and Katrina mentioned all those cozy conversations with Abraham. Just saying that after the Mary Wells reveal, Ichabod has trust issues. The mystery is solved soon enough: the Jincan poison Henry swiped last week is used to raise demons and was the cause of inception. After giving birth, the vessel will die in about 10 to 12 hours. The Cranes and Mills take off for the worst location they can think of: the abandoned St. Henry’s Parish where Katrina left baby Jeremy. Well sure, a filthy, ramshackle place that holds special meaning for Henry is the most sensible hideout/delivery room. Hey, here’s another dumb idea: Let’s get Henry to help out. You know the same one who spends his days trying to eff up their lives. Well, they always say blood is thicker than evil. Abbie asks the question we all are: “Do you hear yourselves?” Nope.

Looking for a mystical thingamajig

Use “I” Statements: With the help of Captain Irving, who doesn’t get enough face time this week, Ichabod tricks Henry into a meeting at Tarrytown Psychiatric. Is this an intervention? Will there be a talking stick? Henry has hearty chuckle when Ichabod refers to the demon inside Katrina. Henry would most certainly not spend all this time away from his crossword puzzles and craft projects for “a mere demon.” Katrina’s about to give birth to the “Horrid King” aka Moloch! Oh, this show and their love of aliases. Ichabod grasps his son’s hand and has a vision of a scared boy running in the woods. I’m confused, is that the kid from “John Doe.” Wasn’t he chased by the Horseman of Pestilence. Come on Show, work with me. This is the one time the Exposition Fairy would come in handy…. At the church, Abbie and Katrina come to the same conclusion about the “Horrid King.” Katrina thinks the only answer is to kill herself before Moloch can be born. Abbie rejects the idea, but I say, let’s not be hasty. Face it, Katrina is dead either way.

Round up the Cavalry: Ichaod returns to the archives and “must Internet immediately,” Crane is vexed that it’s dial-up. Pretty picky for someone who can barely manage a smartphone. It’s hard to believe that this vacant church still has a Internet connection, but okay, Show. Blah, Blah, Blah, Franklin was obsessed with the aurora borealis or Northern Lights and blah, blah, blah the Hellfire Club has a tablet with instructions on delivering Moloch. Ah, Franklin hid an aurora prism in the tablet which can prevent Moloch’s rise and save Katrina. Oh, if only they didn’t have to do everything by themselves, if only they had an army. Abbie’s got an idea… After Ichabod mansplains to Katrina how walkie-talkies work. Crane and Mills head for Sheriff Reyes. Mills claims there’s a doomsday cult in Sleepy Hollow that requires a tactical team. Reyes is being less of a hard-ass today, so she goes along with it. Everyone heads to the warehouse. While the officers start shooting bad guys, Crane and Mills retrieve the tablet. Reyes praises Mills and softens toward Crane who describes himself as a criminal profiler with an emphasis of acts of historical imitation. Sounds like a load of baloney, but Reyes seems to buy it and implies he’ll get his job back. Now he can pay for his own stuff.

Special Delivery: Katrina goes into labor and screams into the walkie-talkie. Seems like all that yelling could have foiled the tactical assault, but okay, Show. Ichabod and Abbie return to the church where he holds Franklin’s prism to the light and stops the birth. Katrina falls unconscious and her husband starts pounding her chest and performing mouth-to-mouth. Abbie covers her face with hand, She’s probably thinking: “Now you know CPR? Where were you two weeks ago? In any case, Katrina is again rescued and there’s kissing.

Ichabod: Where I belong.

Abbie: Whereas, I belong somewhere else.

Abbie goes outside and likely reconsiders grabbing coffee with ex-boyfriend, Luke Morales. Aside  from the occasional demonic possession, he comes with less baggage.

Once Katrina falls asleep, Ichabod follows Abbie outside and says “Holding her just now… is a joy I haven’t felt in an age.” That said, they wonder Moloch’s next move will be and how Abraham will try to get Katrina back. Abbie thinks she knows all she needs to about Henry, but Ichabod stills holds on to hope. Oh, that memory thing about a lost boy crying in the woods for help? Ichabod maintains that it was a vision of Henry as a child, one that he wasn’t meant to see.

Cliffhanger: As a thunderstorm rages, Henry is at Fredericks Manor. What’s he doing? Is he capturing lightning in a bottle?

Sheriff Corbin had a son. After serving in the marines, Joe Corbin returns to Sleepy Hollow. He’s been holding on...