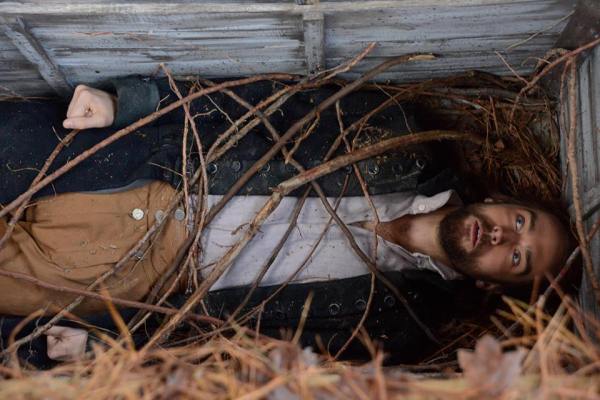 Ah, our beloved Sleepy Hollow is back. When we last saw Ichabod Crane, he came face-to-face with his centuries-old son for the first time. Well, actually he’d met Henry Parish as the Sin Eater, Henry was not only the presumed-dead Jeremy Crane, but the Horseman of War. After the reveal, Henry, gave his mother, Katrina, to the Headless Horseman and bound Ichabod in a pine box. Not to point fingers, but the Cranes need counseling. Our heroine, Lieutenant Abigail Mills made a sacrifice to take Katrina’s place in Purgatory so that the witch could battle the Horseman of War. Crane vowed to return to her, but obviously, that plan didn’t pan out. The theme of the episode is captivity, both real and illusory. Let’s go!

Quotable Ichabbie: Ichabod is literally in a dark place when the lights go on and Abbie tries to turn that frown upside down with Stevie Wonder’s “Happy Birthday” and a cupcake. The show treats Sleepyheads to the first bon mots of Season 2.

Ichabod: And why must your era celebrate terror with dessert?
Abbie: I’m sorry I couldn’t find a cupcake big enough for 251 candles.
Ichabod: Well then… I shall consider myself ‘Punk’d.’

So, we got played here, eh? That scene was shot to make us think Crane was still in the coffin. Guess it’s going to take a while to let us know what’s going on here. Abbie tells Ichabod to make a wish. I wish that they were a couple, but nobody asks me. Oooh, it’s been a year. They both lost someone they know. Wait, what? . Wait, what? Noooo, not Sarah Connor! And Katrina, well….

Battle Station: The Witnesses are summoned to meet with an attending professor at the Historical Society. It’s obvious that the Horseman of Death is back, so out comes the heavy artillery. Too late, the prof’s been beheaded. A shootout with Death ensues. Consecrated bullets and Kali’s arrows slow him down a bit, but the Horseman lobs an explosive and exits. Crane is determined to pursue the Horseman, who killed both his wife and Jenny but Lieutenant Mills persuades him to stay on mission. 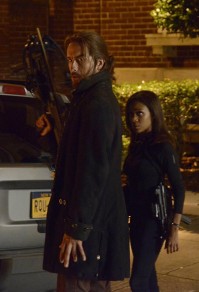 Ichabbie are prepared to fight the Horseman once again.

All About the Benjamins: Abbie and Ichabod discover the professor’s research on Benjamin Franklin. Crane was Franklin’s apprentice and had beef with the Founding Father whom he brands a “Blowhard, braggart, blatherskite and gasbag.” Among other annoyances: stumbling upon a nude Franklin’s “air baths.” The notes show a charcoal rubbing of a key from Harvard archives; Ichabod recognizes it as the key Franklin attached to a kite in the supposed electricity experiment. It was an attempt to destroy the Gehenna key which could release souls from Purgatory and might fall into the wrong hands. Game-changer! Katrina said that in order to leave Purgatory, a soul must either be forgiven or have another soul take its place. Hmmm, was Katrina misinformed or intentionally misleading Crane and Mills? It would be interesting if she’s the Big Bad.

Moloch and Key: The key could free Moloch, the guardian of Purgatory. This show does not believe in padding the episode, it packs a lot into 10 minutes. Ichabod consults with Henry whom Abbie points out is a trickster. Henry’s apparently detained in the the hexed cell designed by Thomas Jefferson. It’s not so bad, really, Parrish spends his days working crossword puzzles and tending to potted plants. The prisoner suggests they search Corbin’s occult files.

Psych: The sleuths suddenly realize that they have no memory of how they trapped the Sin Eater, who throws off his chains and gloats that Moloch has deceived them in order to find Franklin’s key. It’s all been a massive fake out: Ichabod’s still trapped in the pine box, Abbie remains in Purgatory and Jenny and Katrina live. Only Henry is free. Before the illusion cracks, Abbie implores Ichabod to help Jenny and he again promises to rescue Abbie.

Freedom Fighters: Ichabod escapes first. Using sulfur around Henry’s former grave, he manages to blast it open but is relatively unscathed. Seems improbable, but okay, Show…. Ichabod’s phones Miss Jenny, who is being held by Henry. Parrish orders his stooge to keep her alive until the key is found. Jenny overtakes the goon and texts “Tall, dark and British” with the info that she is trapped at the export warehouse on Route 9. As she is shooting her way out, Ichabod steals an ambulance and crashes in for a getaway. They look for the key that will release Abbie…. Katrina stabs the Horseman’s hand but he doesn’t allow her to get away. In fairness, ladies didn’t fight 250 years ago. Disturbingly, the Horseman struts around shirtless. He produces the pendant that he gave her when they were betrothed and appears to Katrina as Abraham Van Brunt, back in the days when he had a head. She’s still not having it. He claims that Ichabod will die before midnight. 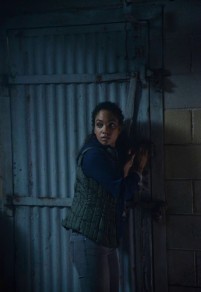 Jenny leaves in an ambulance.

Purgatory Problems: Abbie is arguably in the most peril since she’s stuck in the world between worlds, but she has an ally of sorts. The Lieutenant encounters Andy Brooks who is not so dead — or is it not so undead? He’s in Purgatory and looking good, regaining the form that he had before being molded into a pretzel by Moloch. As usual, Officer Brooks wants to help Abbie who initially rejects advice on evading Moloch. Andy was right about Washington’s map. Why is she such a Nancy No-Listen? Brooks explains that Moloch is gathering a demon army to invade the earth. To communicate with the outside world à la Moloch and Katrina, she must use an enchanted mirror in Moloch’s lair. By uttering an incantation and uttering the name of the person she wants to reach, Abbie can appear to them as a vision. Seems a little “Candyman,” but okay, Show. It works and Crane spots her reflection in a side-view mirror. Ichabod again vows to get to his “Leftenant.” Always one to fall on her sword, Abbie argues that freeing her will let Moloch exit Purgatory. Ichabod insists that she must fulfill her role as the Second Witness.

The Key of Life: Ichabod and Jenny locate the key which he uses it to get his partner, but first a wicked force creates one more barrier:  an entity masquerading as Ichabod. When Crane shows up, Mills beheads the faker. Ichabod is rattled at her breakneck action; Abbie explains that she knew who was genuine because the real Ichabod called her “Leftenant.” They escape the closing portal and the key disintegrates. The Mills sisters joyously reunite. Those two have come a long way.

Cliffhanger: Moloch appears to a penitent Henry and proclaims the battle’s just begun. As Abbie notes, “This is War.”

If there's one thing that makes Ichabod Crane more baffled than waking up in the 21st century, it's suddenly finding...