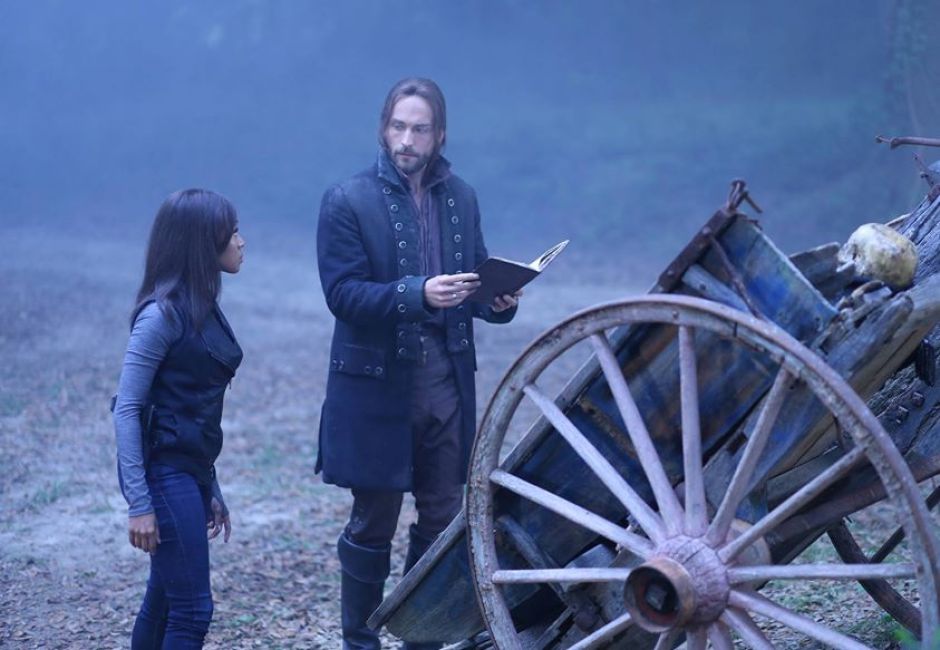 Theme: The theme this week is when bad decisions happen to good people.

Now that Ichabod has devoted his energies to releasing Abbie from Purgatory, this show needs to add Biz Markie’s “Just a Friend” to the soundtrack. Methinks this long-distance marriage to Katrina might be a little flimsy. However now that he’s come to the aid of his “Leftenant” and Miss Jenny, Crane spends a chunk of the episode trying to liberate Mrs. Crane from the clutches of the Horseman, who has recently been presenting himself to his captive as his former human self, Abraham Van Brunt. Her response is surprising. Captain Irving’s replacement, Sheriff Leena Reyes has arrived and she is not playing around; Ichabod and Jenny run afoul of her from the get-go. She fires Ichabod from his consultant role and throws Jenny in jail. Reyes also played a role in the Mills sisters past; that’s going to be an issue.

Psych: This show cannot resist the opening fake-out. It’s all Bobby-in-the-Shower with you, but okay, Show. A ring of fire traps Katrina who is being cuffed by the Horseman, as Henry creepily notes that the Horseman has waited a long time to be with her. Ha! We got you this time says Lucy as she pulls the football away from Charlie Brown. It’s Ichabod’s nightmare. That’s okay, she’s Ichabbie shippers’ nightmare, too.

Abbie: Not exactly up to Martha Stewart’s standards.
Ichabod: Martha who?
Abbie: She’s, uh, big in the wedding industry.
Ichabod: Wedding… industry. So, the blessed rites between a man and a woman…
Abbie: Has become a billion-dollar business, and some… great guilty-pleasure TV.

Prison Break: Mills and Crane must figure out where Abraham Van Brunt might imprison Katrina, and set her free. Ichabod presumes that Katrina is at the old Van Brunt estate in Willow Point, now called Dobbs Ferry. Abbie gives this whole task some major side-eye, but goes along with it.

Exposition Fairy: Sheriff Reyes was with the Sheriff’s Department before leaving for Border Control. She is big on tough-talking and reiterating backstory: Abbie was a rising star on the way to Quantico, Sheriff Corbin is dead. There’s also new info. Reyes knew Abbie and Jenny’s mother. 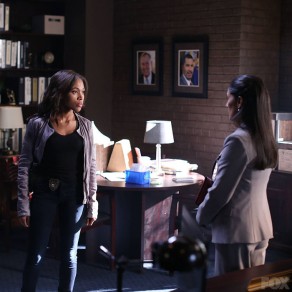 There’s a new sheriff in town.

Big Bad Ideas: It turns out that Benjamin Franklin-stein patched together the body parts of fallen soldiers as an equal to the Horseman. Welp, it can’t all be air baths and drafting the Declaration of Independence. Anyways, against practical advice, Ichabod insists that all they have to do to raise it is attach the Horseman’s skull and say an incantation. Abbie and Jenny are vehemently against the idea of unleashing a monster, but as usual Ichabod wins. Abbie sends Jenny to go get their cache of weapons. This is a bad idea, Reyes catches Jenny in the act and arrests her for illegal possession of firearms and violating parole…. Abbie visits Frank Irving in prison. He’s been targeted by other inmates who don’t take kindly to ex-cops. Abbie vows to help him transfer to the safer Tarrytown Psychiatric. Her first order of business, however, is to locate the Horseman’s skull. Irving discloses that It’s in a vault at Sleepy Hollow Savings and Loans…. Abbie and Ichabod head to the bank and retrieve Ichabod’s head. When the partners show up at the Sheriff’s Office, Reyes fires Crane from his position as a history consultant…. Crane and Lieutenant Mills find “The Kindred” in a tunnel and get ready to animate it.

And Nothing But the Truth: Irving recants his murder confession and insists to the new Sheriff that soul-jumping demon Ancitif is the culprit. Reyes approves the transfer to Tarrytown Psychiatric where he can be treated with antipsychotic drugs and electroshock…. Abraham admits that he lied to Katrina about Ichabod’s death, but also points out that it took her husband quite some time to rescue Katrina from Purgatory, yet he sprung Abbie in mere hours. Katrina recalls watching the pair in each other’s arms while Crane murmured that he’d come back for Abbie…. While in the tunnel leading to Franklin’s creation, a flock of crows rattle Abbie, who had a similar experience in Moloch’s lair. Ichabod mentions that she never told him much about her ordeal in the netherworld and she confesses that it was getting to her, clawing at her mind and soul. When she saw the demonic Ichabod clone, she was so happy that she realized that her faith in him is her greatest weakness. He asks if Katrina is his greatest weekend. She kinda thinks so — or it could be Henry, she says. Basically, Ichabod’s family is trouble…. In the Willow Point carriage house, Katrina does some obvious eavesdropping on Abraham and Henry. Parrish easily catches her and Henry points out that when the Witnesses come for her, there will nobody to save them. 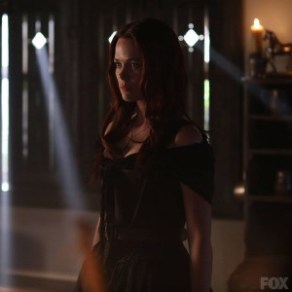 Witch, Please: Katrina cozies up to Abraham, claiming that their engagement fell apart because he was too pushy, while Ichabod let her have time. If Van Brunt will slow things down, she’ll have a chance to exercise free will. He seems to buy it. Meanwhile, Abbie and Ichabod are outside raising the Kindred to battle the Horseman of Death. They’re successful, giving Crane a chance to get Katrina while Headless and War, aka Henry, are fighting their new foe. Much to Ichabod’s dismay, she won’t leave with him. Katrina maintains that if she stays with Abraham she can spy on him and Henry and learn their nefarious plans. Besides, Henry is still their son and she must attempt to save him. Her idea does make some sense. The Cranes share a lingering kiss, Abbie shows up saying that they are running out of time and seems vexed that once again an attempt to release Katrina has gone sideways.

Danger Ahead: After Ichabbie departs, Abraham returns and is pleased to see that though she’s gotten out of her restraints, Katrina has stuck around. When it’s all over, Abbie supports Katrina’s idea to act as a mole, but worries about where Franklin’s monster went. She notes that they’ve lost track of the skull…. Lieutenant Mills visits her sister in jail and says she’s working on getting her out. A peeved Jenny tells her not to wait another 13 years this time.

Cliffhanger: Reyes looks in on Irving at Tarrytown Psychiatric and reports that two of his officers are dead and last night two more decapitated bodies turned up; she accuses Frank of knowing more than he’s saying. Look Lady, he already told you about Ancitif. Irving lawyers up with an attorney who issues an injunction against all involuntary treatments. The lawyer kicks out Reyes and presents a contract and pen. The pen pricks Irving’s finger before he signs. Too bad the lawyer is Henry Parrish. 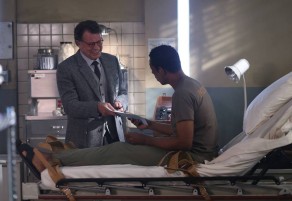 Ah, our beloved Sleepy Hollow is back. This show which embraces and gives a neck massage to every trope, kicks...