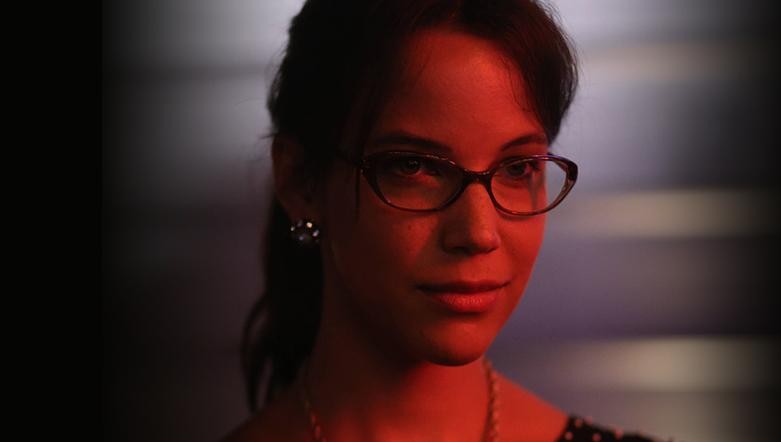 Henry has a heart but not in the right place; he doesn’t understand how organ donation works…. Katrina has joined the Scooby gang. Something’s missing: Jenny Mills. Let’s see Sarah Connor’s reaction to the corseted one. There’s a sword fight. By that I mean measuring of man parts.

Heart of the Matter: Henry’s got a beating heart and seductress Lilith to do his bidding. Sleepy Hollow has nightlife? With all the bizarre deaths, you’d think they’d enforce a curfew. Lilith hits a nightclub; it’s kind of beat; this ain’t Miami Beach. She selects some dork and they go to his car, Lilith straddles him and sucks his … life force. Get your minds out of the gutter, pervs…. Crane and Lieutenant Mills investigate and find the victim’s shriveled corpse. Mills observes: “This is supernatural. I’ll put my money on Henry being behind it.” I don’t think Abbie’s Lieutenant Obvious, but okay, Show.

Ichabod recalls the reality dating show he watched with Katrina.

Abbie: The first victim was found in the backseat of his own car. Who gets in the backseat of their own car?  Someone who thinks they’re going to get lucky. Um, get lucky, score, get-get some.
Ichabod: Ah, he was macking. Macking on a lady. Amber said the same thing about Marco.

Woman Trouble: Abraham wants Katrina back, Henry, as usual, says to use Moloch’s suggestion box. Abraham should reclaim her and offer the final rose…. The seductress enters and vomits up the dead guy’s hot-pink life force while Henry collects it in a glass vessel. When I hurl after a night of drinking, I expect my husband to hold my hair back; I’m old-fashioned. Henry’s lord needs sustenance. Moloch is such a pain in the ass. I had a boss like that long ago, and she wouldn’t speak to me in the hall. I’m not bitter. I hope she’s reading this and sees how far I’ve come. Top of the heap, Baby!… Katrina won’t just sit home in yoga pants mocking reality TV, we could never be friends. Now she’s helping out in the archives though she’s delicate. Tom Mison has the most expressive face. He does all kinds of emoting when Katrina brings up the niceties Abraham performed: Giving her pedicures and such… Lilith is into the bi thing, she drains some girl. 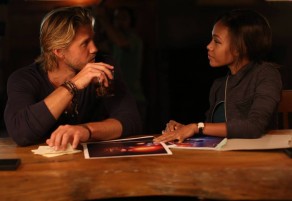 What will Jenny think of this?

Boys will be Boys: At the bar, Abbie seeks Hawley’s help but he acts douchey and is smarting over the Wendigo thing. When she won’t drink with him, Hawley rudely moves on to another woman. Abbie gives him so much side-eye it’s front-eye. Back at the cabin, Ichabod is thrilled to talk smack about Hawley. Someone’s jelly. 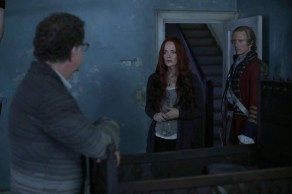 The family holidays will be hellish.

That Sucks: Abbie and Katrina realize they’re dealing with a succubus who targets those with secret desires. Back at the bar, the Lilith sets her sights on Hawley. Icchabod and Abbie rush to him, but Hawley defends himself with the artifact of the week: a Maelstrom crystal. When Ichabod tells Hawley that the succubus is drawn to those with hidden desires, he observes Hawley looking at Abbie and gets all protective. As much as I miss Jenny this episode, she doesn’t need to see this. Ichabod admits to Abbie that he and Katrina aren’t the people they once were, things changed… Turns out succubi attack at monthly intervals. Yeah, Ladies, we know about that: Chocolates and hot water bottles. Katrina figures out the succubus is using the life force to feed the creature that was inside her last week: baby Moloch. Infants, ugh, up all night crying and plotting the End of Days. So tiring. Katrina will need an au pair.

The “I” in Team:  Hawley agrees to help, as long as there’s something in it for him. The mission: lure the creature and destroy it’s disembodied heart. While Abbie and Katrina search for the heart, the men are at Club Twerk, where Ichabod asks about Hawley’s  “intentions” toward his “Leftenant.” Hawley rolls his eyes, but asks if Abbie talks about him. Through teamwork, Lilth’s heart is destroyed and Ichabod fatally shoots her. Before dying, the succubus has a few words for Crane: He harbors hidden desire, but at the same time his emotions have soured and he has doubt. Lilith is not all bad…. Abbie gives Hawley a piece of Lilith’s heart to sell.

Cliffhanger:  In order to get access to Moloch, Katrina returns to Abraham; she asks Abbie to break the news to Ichabod, who handles it surprisingly well. Back with Abrham and Henry, she coos over the baby. I start shipping RedNoHead.

Getting Katrina out of Purgatory needed to be done. After a certain point, Ichabod would seem impotent if he didn't...