Sleepy Hollow: Why Katrina Had to Die 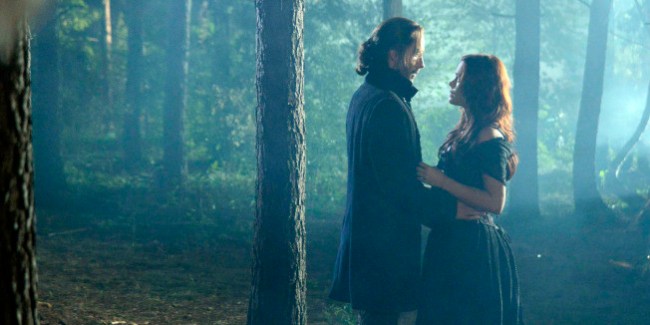 Poor Katrina Crane, arguably one of the most reviled TV characters in recent history, has been killed off — at the hands of her heroic husband. It says a lot about Katrina, that this act will probably inspire more Ichabod love The show had a witch of a problem. Here are some thoughts on why it was time to say ding-dong.

First Things First: Katrina served a purpose in the first season of Sleepy Hollow. Time traveler Ichabod needed an emotional tie to his past. Katrina served as a handy device. She also helped define Ichabod as a devoted romantic leading man.

Shipping Zone: Shipping was almost inevitable and probably intended by the writer (these friends sure do like the lingering embrace, murmuring and sidelong glances, don’t they?), that’s what happens when there is a third party. I covered soap operas for more than a decade. I know ship fuel when I see it. When the promotional material features a man and a woman reaching for each other, that right there is deliberate ship fuel. 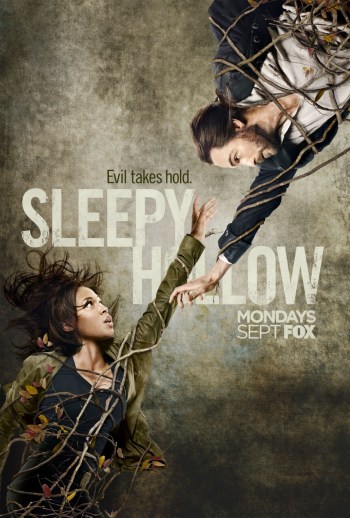 Tom Mison and Nicole Beharie share such intense off-the-charts chemistry they may have unintentionally made life harder for the writers. It’s doubtful that they expected the ship to go full-steam ahead. If the show was deliberately shipping, they know that any ship worth its salt needs a solid spoiler. Katrina was perfect for that role. What kind of man would Ichabod be if he just forgot about Katrina while she was still trapped?

Say What? Katrina became annoying when her scenes were all relegated to cryptic whispering that wasn’t always consistent. To free her, the answers were in Washington’s Bible. She was in Purgatory because why? Was it Moloch? Was it shadowy enemies who trapped her?  We certainly didn’t hear anything about the Four who Speak as One, did we?

No Contest: When action girls like Abbie and Jenny are running around preventing an Apocalypse, a breathy damsel in distress just looks useless. Who didn’t feel sorry for poor hapless Katrina? Eighteenth-century ladies did not know hand-to-hand combat.

Emotional Rescue: It was vital that Katrina be rescued. Ichabod could only let her drift around Purgatory for so long. He needed to save her because romantic leading men are always potent.

Truth be Told: Things went sideways once Katrina was depicted as shady. She neglected to tell Ichabod that she was a witch and that they had a son. She had enough time to whisper everything else, why not that?

Epic Fail: All this talk about rescuing Katrina, and once Ichabbie made it to Purgatory, she was all, “I have to stay here unless someone takes my place. Oopsie.” Really? So if Ichabod arrived alone, would he have had to stay behind? Abbie was the one to make the heroic sacrifice.

Power Outage: Once out of Purgatory, Katrina’s powers were diminished. Really? Did she have to power up like a Samsung Galaxy? It gets worse. Within minutes of her release, Henry announced that he was the Cranes’ son and handed her over to Abraham. Still a damsel in distress.

Here We Go Again: Repeated rescue efforts were foiled — by Katrina. She allegedly remained with Abraham to spy on his plans with Henry. Nothing to see here, just a woman hanging out with her old boyfriend and bratty son. Uh-huh.

What a Witch: Once she fled Abraham, she spent a wee too much time regaling Ichabod with the tales of how Abraham served her quince tea. It was revealed that in addition to being a sorceress and bearing a son, Katrina had a hand in a rival falling to her death. Katrina did not actually kill Mary Wells, but she did forge a letter to make Ichabod think a defeated Mary had returned to England. And since she’s a powerful witch, why couldn’t Katrina save Mary? It would make Ichabod love her even more. And it’s not like Mary was competition. And there was more back-and-forth with Abraham.

You Had One Job: At a certain point, Ichabod, Abbie, and Jenny learned how to perform incantations on their own so they didn’t really need a witch. Abbie routinely saves Ichabod and Ichabod routinely saves Abbie. They rescue and protect each other. That’s how Team Witness works.

The Lame Game: Katrina was reduced to more embarrassing tropes like the mystical pregnancy. Always a victim, that one. Her son Henry was behind it, but he could still be saved, right? Right? He enabled his mother to be impregnated with an evil baby, but he’s not so bad, right? Ugh.

Something Wicked This Way Comes: This allegedly powerful witch couldn’t do much more than float a flower. Willow Rosenberg was floating pencils in high school, girl. Solomon Kent made the mere suggestion that she embrace the dark side and that was all it took for Katrina to go bad. No internal struggle just bam! “I’m evil now.”

Burn Book: After joining forces with Henry, Katrina decided she was the second coming of Regina George. (She’s not, Regina George had power.) Upon embracing evil,  she haughtily disrespected Ichabod with the put-down that it could never work with a “mortal man.” Oh? Since when? “Bye, Felicia.”

Thrill Kill: With Henry dead, Katrina performed a spell to go back in time and make sure that Ichabod died for real and would not be resurrected. Instead of doing it on her own, she had to ask  Horseman for help. Grace Dixon reversed the spell (on her own, thank you very much) so Katrina landed right back in the present. Attempting to kill Abbie didn’t pan out. As she used what magical powers she had to strangle Abbie, Crane saved his Leftenant by stabbing Katrina. It was a mercy killing.

While it’s plain the vast majority of fans and entertainment critics are breathing a sigh of relief, it’s only fair to note that Katrina has her defenders.

Those on Team Katrina have often passionately Tweeted about her beauty (the actress is beautiful, no argument there) and her marriage to Crane (they were indeed married.) They see great Ichatrina chemistry. These concerned fans criticized the show for not sticking to the original story: there was no Abbie Mills in Washington Irving’s tale and Ichabod loved Katrina. Of course, Irving’s Ichabod was not a drop-dead handsome and heroic figure, he was an unattractive coward and Katrina rejected him, but why quibble? Things did turn out better for Ichabod and Katrina in the Johnny Depp film version, so it’s safer to go with that as the source

As much as many fans despised Katrina, her droves of defenders have their own gripes and feel unheard. Abbie has been drawing ire, there have been Tweets about her “tone” and “attitude” and she has been given the moniker “Miss thing.” After the karaoke episode, she was labeled “Beyoncé.”

Wait, is that a dig? That sounds like a compliment to me. Maybe it was because the Tweeters confused Gnarls Barkley’s “Crazy” with Beyoncé’s “Crazy in Love?” It would be awesome if they started calling Abbie “Patsy Cline.” Make of that what you will.

Katrina loyalists have also decried those whom they see as “loud,” “bullies” and “Twitter trolls.” Tom Mison’s remarks about the doomed Crane marriage and Ichabod’s love for Abbie was seen as a “betrayal” These Katrina fans are not going to sit still for this. They have railed at the show for what they see as “pandering to the loudest voices.” To counteract the #RenewSleepyHollow campaign, there is a #CancelSleepyHollow campaign. Make of that what you will.

Please leave a comment. (They don’t appear right away.)

7 thoughts on “Sleepy Hollow: Why Katrina Had to Die”

"Tempus Fugit," the Sleepy Hollow season finale was everything. The episode was filled with "OMG!" and "OMFG!"