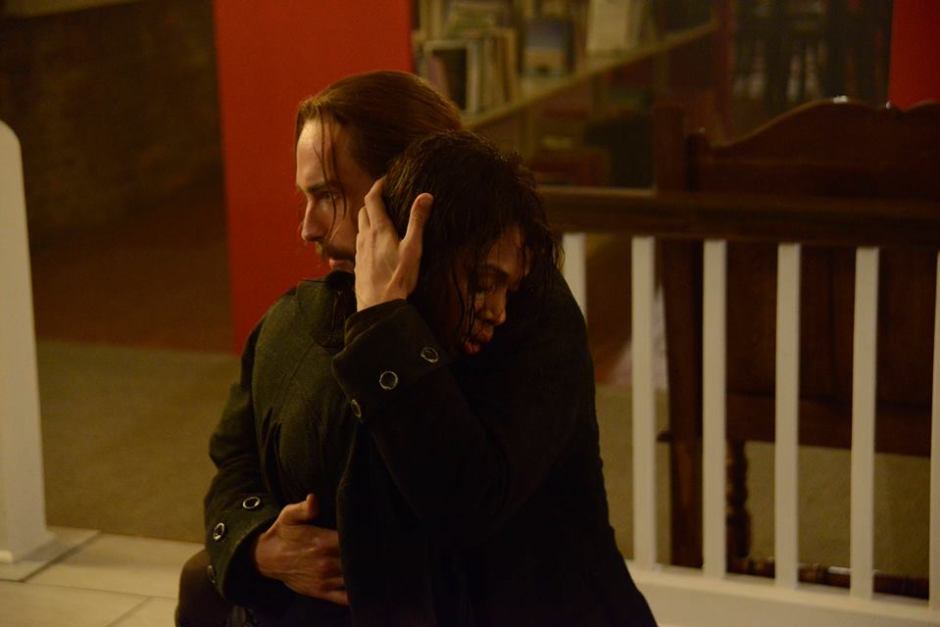 Theme: Women’s love and desire, both requited and unrequited

A woman goes to extremes to best her perceived rivals for Ichabod’s heart. The writers toss Ichabbie shippers a bone. Crane sees Katrina in a new light.

Fool for Love: Caroline (Laura Spencer), who engages in Colonial re-enactments, drops by Ichabod’s cabin with homemade gifts: shirts, breeches, hose, butter, lingonberry preserves and a decorative pillow. Slow your roll, Sister. As perceptive as Crane is, he misses glaring signs until Miss Caroline gets too close. When Ichabod mentions his wife, a flustered Caroline points out that he doesn’t talk about or even display photos of his spouse so she assumed he was available. Further awkwardness ensues when Abbie strolls in.

Abbie: Didn’t mean to interrupt.
Caroline: I am such an idiot. This is not what it looks like, Mrs. Crane.
Abbie: Mrs. who now?
Ichabod: Oh! No, no, uh, Miss Mills is my partner. Uh, not-not life partner. She’s my… We… Oh, look! She comes bearing a selection of delicacies from the Far East.
Abbie: Commonly known as Yummy Food Schezuan.
Caroline: I’ll be going now. Excuse me.

Bewitched, Bothered and Bewildered: As Ichabod frets about Katrina’s stay with the Horseman, she enchants a crow to deliver a note to her husband. She’s nearly caught, but sweet-talks Abraham Van Brunt. He goes straight to Henry to ensure Katrina hasn’t gotten around the hex barring her magic. Henry’s snooping reveals a long-ago vision of Ichabod with another woman…. Ichabod calls on Caroline at home and asks for her friendship. After the visit, a woman with glowing green eyes and cloaked in black lace attacks Caroline. The next day, Crane and Lieutenant Mills find out that Caroline drowned in the river. Abbie’s research at the library yields info on a local legend about a ghost who went to a watery grave in Blind Brook River. 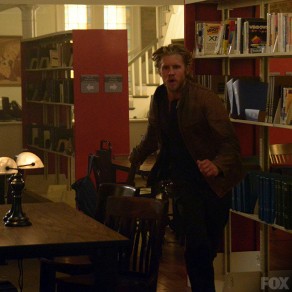 Air and Water: When Abbie and Ichabod split up at the library, the crow delivers Katrina’s note to Crane. Hawley is also at the library reading up on the supernatural. Abbie holds a grudge from the last episode when Hawley declined to help them kill the Pied Piper. She’ll soon need his assistance again. While she’s alone, Abbie sees the Weeping Lady, who pulls her into a watery portal. It seems no extras notice this, but okay, Show. Ichabod struggles to save his “Leftenant” from the green-eyed monster and finally pulls her out. A frantic Crane doesn’t know what to do, but Hawley comes along and successfully performs mouth-to-mouth resuscitation. It won’t be the last time he uses his lips.

Ex-Files: Ichabod discovers more folklore about the woman who allegedly drowned herself in the Blind Brook River and haunted its banks. He remarks that the spirit harms those whom he cares about. Abbie produces a piece of black lace from her attacker’s shawl and Ichabod recognizes the swatch. It belonged to Mary Wells, a friend from London to whom Ichabod was promised when they were children. Mary came to the colonies and found him chatting up Katrina, who was betrothed to Abraham. The women engaged in some major side-eye. Ichabod reminded Mary that they agreed to break the engagement before he left London to fight in the Queen’s Regiment. Mary blamed Katrina, but he resorted to Ye Olde she’s-just-a-friend-rap. To make matters worse, Ichabod told Mary that he cared for her as a brother cares for a sister. That did not go over well and Mary left in a huff. The next day, Ichabod received an apology letter; Mary released him from obligation and said she was going home. Abbie easily deduces that Mary is the spirit; Ichabod fears the Weeping Lady will target Mrs. Crane. Hawley gives them a special crossbow to fight Mary. He’s done two good things in this episode. 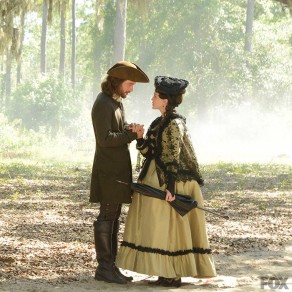 Wet and Wild: Mary tries to drown Katrina, who escapes and runs into her husband and Abbie. Ichabod fills his wife in on the spirit’s identity; she suspects that Mary was raised by Henry. Katrina’s witchcraft can send the spirit to a better place, so Abbie helps perform an incantation while Ichabod tracks Mary. Though he says he’s sorry for disappointing her, Ichabod brings up Mary’s jealousy and anger. Maybe not the best time for that kind of talk, Ichabod. The spirit heads for Abbie and Katrina, who’ve completed the spell.

Didn’t See That Coming: Ichabod takes Mary into his arms and asks what happened to her. Before her spirit departs this realm, Mary literally points a finger at Katrina. Mrs. Crane acts shifty; Ichabod sees that she’s hiding something and demands the truth. Katrina confesses that Mary wrote a letter to discuss her rival’s relationship with Ichabod. They met in the woods and Mary accused Katrina of turning Ichabod against his country, family and her. Miss Wells lunged at Katrina, tripped over a root and fell to her death. Ichabod realizes that his wife forged Mary’s good-bye letter. Katrina admits she used magic to match Mary’s handwriting. She argues that Ichabod would have felt guilty, returned to England and might not have fulfilled his role as a Witness. Ichabod lists all the things she’s kept from him: being a witch, spying for Washington, not telling him that he’d sired a son and now this. The Horseman shows up ready to fight, but Katrina informs him that an angry spirit took her away, not Ichabod. Katrina tells him that Ichabod saved her life. The Horseman is uncharacteristically reasonable and Katrina leaves with him.

Relationship Status: Jenny pays a surprise visit to Hawley’s boat to drop off the crossbow and flirt. Hawley responds that they they decided they “weren’t gonna do that anymore.” She plants a steamy kiss on him, swipes his coffee and slinks off…. In memory of Caroline, Ichabod gathers some members of the colonial re-enactment group at a bar. Those folks really share a bond. After the memorial, Ichabod tells Abbie: “Our duty must be to one another before everything. Or anyone.” She asks if this is another Katrina thing. He wonders how a marriage can survive without trust and honesty…. Katrina thinks Abraham and Henry summoned Mary to cause friction in her marriage. Abraham denies having any part in it and says he never wants to see her unhappy. Katrina thanks him and she seems sincere.

Cliffhanger: A growling Moloch roughs up and berates Henry, saying that he wants Katrina turned, not killed. She is one of the Hellfire Shards. Ruh-oh! What does that mean?

Abbie and Ichabod’s new Scooby Gang member, shady Nick Hawley is back. He’s helpful when it serves him. A tune...