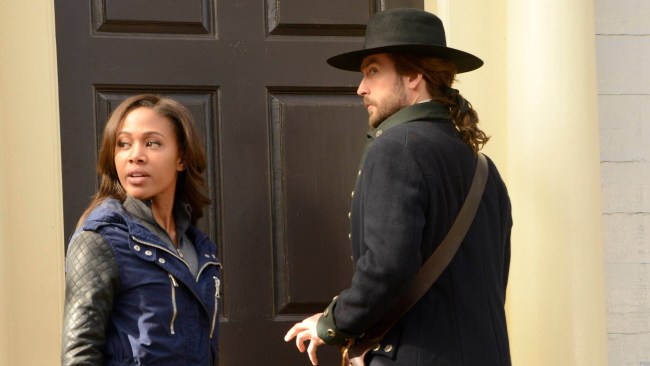 I’m breaking from my usual recap because the Sleepy Hollow season finale was everything. The episode was filled with “OMG!” and “OMFG!”

As we all know, the sophomore season was a flop with fans and critics. The writers, execs, and stars repeatedly urged viewers to keep watching and that something big was coming. Tempus Fugit” delivered in an astonishing way. In the last moments of “Awakening,” the series rallied. Ichabod manned up and finally took on Henry, a once compelling character who was reduced to driving most of the season’s silliness. Ichabod gave Abbie the go-ahead to kill his son. This led to Katrina reaching her full witch powers (more on that later) and vowing to return to the past and let Ichabod die this time. Lieutenant Mills was not about to let her fellow Witness perish, so she impulsively hitched a ride to the past with Katrina. The show treated us to a brilliant parallel of Ichabod’s reaction to waking up in 2015 and Abbie waking up in 1781. Those two are so in sync. That cliffhanger indicated that Sleepy Hollow remembers its Season One roots.

Nicole Beharie’s Abbie is fearless in any century, including one that wasn’t particularly welcoming to a confident, authoritative, black woman, in trousers. Rather than quick flashbacks, Tom Mison got the chance to play an 18th century Ichabod for most of the episode. This Ichabod is in his element and not confounded by squeaky bananas and selfies (more on that later).

After some time with the prisoner, Captain Crane blatantly disobeys authority, not unlike the pilot when Lieutenant Mills did the same for him. When Ichabod expresses concern about what would happen to this strange woman, he is told that he could buy her at auction. Abbie does not let herself get auctioned, even if it is 1781. Olivia Pope really should be taking notes.

At the supposed height of her powers, Katrina isn’t capable of doing anything without a man’s help so she enlists the Horseman aka Abraham Van Brunt. Did you notice that the Horseman is a massive man? Abraham isn’t what you would call brawny. 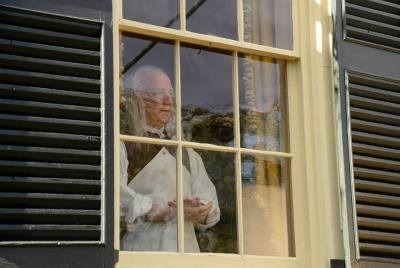 For of all Ichabod’s reminiscing about his relationships with the Founding Fathers, Abbie finally has a chance to get in on the colonial action. Despite Ichabod’s grave reservations, he takes Abbie to Benjamin Franklin who is thoroughly charmed by Lieutenant Mills and calls her “the American dream.” Benjamin Franklin is a fanboy.

Realizing that Abbie is holding something back, Franklin ditches Ichabod and gets Abbie to admit that Katrina is working with the enemy. Franklin’s response? “Forget Katrina.” That was one step away from a “Bye Felicia!” In any case, Franklin says there is still time to reverse Katrina’s spell so that history plays out as it was meant to. They must get to Frederick’s Manor. It’s about time! Franklin is stopped when the Horseman shows up and decapitates, the father of invention. Wait, what? OMG! OMG! And that won’t be the first time you pick your jaw up off the floor.

Blaming Abbie, Ichabod tosses her back into jail. She is finally forced to drop a dime on Katrina. He acts like Abbie is lying, then runs home to see Katrina. She denies being pregnant despite having a copy of “What to Expect When You’re Expecting” and a Diaper Genie on the kitchen counter. Her “Witchcraft for Dummies” is wide open, mind you. Crafty Katrina floats a knife behind her husband’s back because … metaphor. Before she can strike, there’s a knock on the door. Couldn’t Katrina just kill her husband and blame the whole thing on Abbie? Katrina sucks at being a witch. Willow Rosenberg would have flayed  Ichabod by now and then gone to the Bronze to dance on his grave.

Ichabod starts to believe Abbie, who tells him the proof of his 21st century life is on her cell phone. The point that her password is Crane’s birthday is lost on no one. In any case the cell phone gambit works. All it takes is a selfie video (You don’t take a video to make a selfie, Show, but okay.) Seeing his future self harumph about waffles is all Crane needs to know. BTW,  play that back a few times and pause on the images. Abbie saved pictures of Sheriff Corbin, a scene at the baseball game, Ichabod doing yoga, karaoke night and Irving with arms crossed. Yeah, we know Abbie wasn’t standing around taking random pictures and videos, but it in no way diminishes the charm of this moment.

A hulking man takes his jacket off and enters Abbie’s cell. We all know where this scene is going We’ve seen this trope in countless books, movies, and TV shows. But we have not seen it with Abbie Mills as the intended victim. Don’t even think of getting rapey with Abbie. She will issue an epic beatdown. The would-be assailant gets his behind served to him. (Later on he seeks medical attention from Katrina who kills him, so bad day all around.)

Ichabod rushes to Abbie’s cell, declaring, “I’m here to save you.” His bafflement at seeing that Abbie rescued herself is a thing to behold. So is her, “Thanks, but I’ve got this” look. On their way to Frederick’s Manor, Ichabod humbly admits that Abbie was right and he’s glad they’re partners. Abbie says they are more than that, they are friends. A gracious Abbie says Katrina wasn’t always evil and had saved their lives. Wait, what? When? Did I miss that episode? For his part, Ichabod regrets that he missed seeing Katrina for who she is.

At last, it’s the character you were longing to see since Abbie wound up in 1781. Hello, Grace Dixon! Abbie is overwhelmed to meet her ancestor, who is as splendid as you would imagine — modest, yet powerful. Just as Grace prepares to perform the reversal spell, Katrina and the Horseman show up. Before Crane rushes out to hold them at bay, Abbie takes a moment to lunge at him for a good-bye hug. A startled Ichabod has yet to hear the phrase, “We hug it out.” Once Ichabod leaves to fight, Grace reverses the spell and all is as it was.

Abbie and Katrina are back with Ichabod. The enraged witch decides that Abbie is the blame for everything. She’s got enough magic to magically lift Abbie in the air and strangle her. Ichabod does not like it when his Leftenant is nearly killed. He knocks the spell book out of his wife’s hands. She doesn’t help matters by grabbing a knife and swinging at Ichabod. As they grapple, Ichabod stabs and kills Katrina.

The ghost of Henry shows up to escort her to some other show.

Abbie tries to comfort her partner saying, “You had no choice.” He answers, “Yes, I did. We all did.” You know who didn’t have a choice? The writers, because they were sinking this ship, no pun intended.

Jennie and Irving arrive. The original four: Ichabod, the Mills sisters and Irving are back together and ready for the next adventure.

This was a poignant and fulfilling season finale. In the disheartening event that this is the series finale, we can comfort ourselves with a satisfying conclusion. If as we all hope, the fans get a third season, the series has opened the door for what could be the best season yet.

Please leave a comment. Remember, they do not appear right away.

Sleepy Hollow's petite powerhouse Abbie Mills is one of the standout heroines on TV. She's a bold, brave, brainy, beautiful...