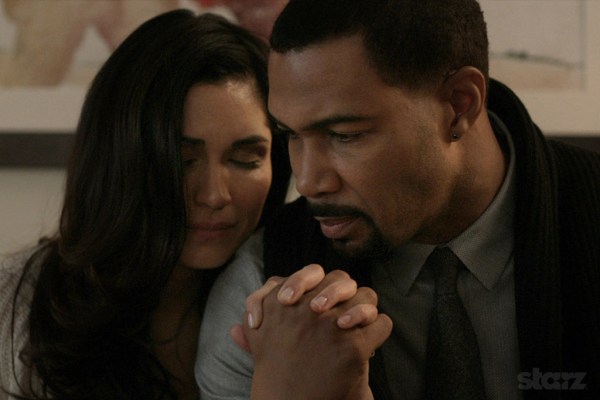 Warning: We are shameless and hardcore Jamela shippers. If you don’t believe Jamie and Angela are perfect and beautiful and the stuff of unicorns, gumdrops and rainbows, you’re just going to get all mad. Proceed at your own risk.

Power is a gritty crime drama. Ha, ha, just kidding! It’s an epic romance drama about high school sweethearts Jamie “Ghost” St. Patrick and Angela Valdes. They met again and are madly in love and we are madly in love with them. The Starz show gave us everything in 2015: Jamie and Angela and also Angela and Jamie. It went like this: 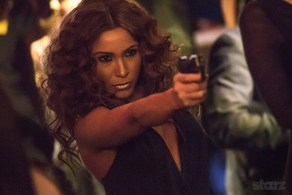 Ghost: Hi, Honey. I’m home. Life sucks.
Plot: Drugs, something, something.
Tasha: Don’t worry. I know you don’t exhibit much interest in me but I’m good at one thing.
Team Jamela: Annoying us?
Team Not Jamela: Being Jamie’s wife so we can talk smack about Angela?
The St. Patrick Mansion in the Sky: Spend a lot of time lounging about as my square footage continues to grow each week?
Tasha: Well, yes to all of those things. But I meant I’m good at criminal enterprise. To be honest, I’m probably smarter than Ghost, who hasn’t learned how to do the “secret” part of a secret affair. That’s probably why I’m so salty. In any case, start a turf war, Ghost.
Plot: Drugs, something, something.

Angie’s boss at the FBI: You messed up our big drug case. I should fire you.
Angie: Gulp.
Angie’s boss: You are perfect and beautiful and your chestnut tresses deserve a corner office and raise. I won’t fire you, I’ll just demote you by sending you to the white collar division.
Team Jamela: Shut up, Angie is beautiful and perfect and do not ever do anything but worship her.
Angela: Now I can figure out how to find “Ghost,” the top-level illegal drug professional I’m looking for. Time to go see my sweetheart Jamie. Boy, am I lucky that I don’t have to take my work home with me, amirite?

Jamie: Hi Tommy.
Tommy: Hi Ghost. Funny story, your beautiful and perfect girlfriend works for the FBI.
Jamie: There is no way that my beautiful and perfect one true love works for the FBI. People who are as madly as love as we are don’t keep secrets. I sure hope Angie doesn’t find out I’m a top-level illegal drug professional.
Angela: My investigation shows that the top-level illegal drug professional I’m looking for is probably Tommy. Poor Jamie will feel so bad when he finds out.

Plot: Drugs, something, something.
Jamie: The best way to handle this is to go to Miami with Angie. We’ll have a beautiful and perfect time at the Eden Roc Miami Beach, a luxury resort, and spa. We are so beautiful and perfect that we can walk around in chic clothing and never break a sweat. Angie’s luxuriant chestnut tresses will not yield to humidity. I will act all kinds of shifty as I search for Pink Sneakers, but Angie won’t figure it out because she is blinded by our beautiful and perfect love. I just must be careful so that Tasha doesn’t find out about our beautiful and perfect love affair.
Tasha: Hi Jamie, welcome home. You sure are bad at hiding your love affair. I found evidence from the Eden Roc Miami Beach, a luxury resort, and spa. Move out. I’ll wander around here with the two or three kids that we have. I don’t know how many there are. It’s supposedly three, right?
Team Jamela: Welp, now that you know, Tasha, pack your bags. And take Team Not Jamela with you. This show is about Jamela. It’s always been about Jamela. It will always be about Jamela. Why can’t you people see that? WHY? Jamela is rubber and you’re glue and whatever you say bounces off them and sticks to you. Whoops, sorry, we just got carried away.
The St. Patrick Mansion in the Sky: Why does Jamie have to leave? You should leave so that Angie can move in. I’m some sort of organism that adds square footage every episode. I just expanded to include a special room for all of Angie’s hair products because it must take a lot of work to maintain those luxuriant chestnut tresses. Frankly, this apartment is so big that you could all live here with your two or three kids.
Tasha: Welp, guess I’ll have an affair with the chauffeur/lackey Shawn. He’s weird and awkward and calls Ghost “Uncle G.,” which adds a sordid level to this relationship. He also is Kanan’s son. Kanan was G. and Tommy’s boss but then he went to prison for drugs and they got rich without him. Now he’s out and all he has to show for it is some jacket inspired by Thriller. Come give mama a kiss, Shawn.
Shawn: Yay, I never got to touch a girl’s boobies before! You are the best aunt ever.
Tasha: Sigh. Just shut up and take your clothes off. 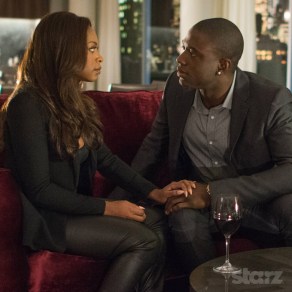 The Audience: You know, Tasha, we give you a lot of guff but you really are smart and quite lovely and could do better than this hobbledehoy. We don’t want you with Jamie, but this is ridiculous.
Tasha: I know I could do better, but I almost never step foot out of this ever-expanding Mansion in the Sky so the best I can do right now is home-delivery.

Holly: Hi everyone, remember me? After I got out of the hospital, I resumed my relationship with Tommy. Sometimes we had fights, I actually threatened to destroy his Doobie Brothers vinyl, which means I’m an asshole because the Doobie Brothers are awesome.
Angela: Okay so, help me prove that Tommy is the top-level illegal drug professional, who goes by the name of Ghost.
Holly: LOL!
Angela: What?
Holly: Ghost is the chocolately goodness that you have sizzling sex with in nearly every episode.
Angela: Whaaaaaat?
Holly: I’m a cocktail waitress and I figured this out faster than you did. Honestly, Tasha and I are both better at figuring things out. Don’t feel bad. You are beautiful and perfect and you have luxuriant chestnut tresses.
Angie: Hmmm. I better keep this to myself for a while. If I reveal my hand, Jamie and I will fight and that will upset Team Jamela.
Agent Greg Knox: I’m Angie’s former boyfriend and current coworker. I’m still in love with her.
The Audience: That’s understandable.
Greg: I’m going to spy on her and Jamie from afar because I’m all kinds of creepy.
The Audience: Not cool.

Tommy: Ghost, you can’t trust Angie. Your girlfriend will bring about your downfall. Find a nice girl like Holly.
Irony: Hmph, hmph, hmph.
Jamie: Yeah, okay. Psst, Holly. Leave town and keep your mouth shut about my business or I will kill you. And don’t you ever dis the Doobie Brothers again, do you hear me?
Holly: Bye-eee.

Ghost: I gotta go do something careless like get in a fender bender. Too bad Shawn isn’t driving me tonight. I better call Tasha for bail. I hope Angie isn’t lurking about the station gazing at me like her heart is breaking.
Angela: Don’t mind me. I just happen to be in this scene lurking about the station gazing at you like my heart is breaking.
Tasha: I’m here to bail out your cheating ass because you don’t have one other person to call. Don’t you have any non-felonious friends who could bail you out?
Jamie: No, actually. This is a gritty show about drugs. You wouldn’t know that from these recaps though.
Tasha: Who the hell is that beautiful and perfect woman lurking about the station gazing at you like her heart is breaking? And more importantly, what styling products does she use? The color is so rich. There is not a hair out of place.
Jamie: I always loved her and I never loved you. Thanks for bailing me out, though.
Team Jamela: Damn, Jamie. Even we think that was harsh. Poor Tasha.
Jamie: I forgot to mention that she works for the FBI and could ruin our lives.
Tasha: Sigh. I really am the smart one. Okay, keep having sizzling sex with her. That way you can keep and eye on her. Besides, I’m secretly on Team Jamela.

Holly: Hi, Tommy. I was supposed to leave town, I came back to tell you that I’m a snitch, but I did it to keep you out of jail. Let’s go away. 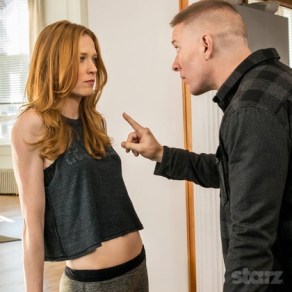 Tommy: So you don’t care about the Doobie Brothers and now this? I’ll have to kill you.
Holly: Oh, look at the time! Gotta go!

Tommy: I think I should kill Angie.
Jamie: Hi, Tasha. I think Tommy might kill the woman I love. I don’t mean you, of course. I mean the one who might lead to the downfall of the drug operation.
Tasha: Yay! That would solve all of my problems.
Jamie: Would you tell him not to kill her?
Tasha: OMFG.

Plot: Drugs, something, something.
Angie: Welp, I found Holly but she says Jamie isn’t Ghost. He’s probably guilty, though. We’ll find out in the big drug raid.
Deus ex Machina: Tommy is going to show up so that it looks like he’s Ghost. By some stretch of the imagination,  Jamie won’t be caught and now everyone at the FBI will like Angie because she solved the case. In other news, the charges against Tommy won’t stick so it’s all’s well that ends well.
Jamie: Sorry, Angie. I couldn’t let Tommy go down like that so I blew up your case. We’re still cool, right?
Angie: Nope.

Kanan: Hi, remember me? I hate Ghost and Tommy. They set me up to go to prison and then they made all this money. I’m going to manipulate my simple son into killing him.
Shawn: I can’t wait to kill Uncle G. and run off with Tasha.
Jamie: You’re not going to kill me, dumbass. Just go away.
Shawn: I changed my mind, Pops.
Kanan: Okay, bang bang, you’re dead.
Tasha: Hmm, I wonder what’s taking Shawn so long?
Kanan: Hi Jamie, I’m here to kill you.
Jamie: Oh, look, I managed to kill you instead!

Greg: Hi Angie. I can’t wait to put your boyfriend in prison.
Angie: Despite the fact that I have given you no signs to think we can ever be a thing again, let me “help” you with the case.
Greg: Yay! Wait, who destroyed all my evidence?! Has anyone seen Angie? Gulp! I’m going to go tell everyone what she did, but nobody will believe me. I’m annoying and should run away with Tasha.
Angie: I’m really mad at Jamie we’re going to break up for good.
Team Jamela: (Rolls eyes)
Angie: I mean it! Oh, Hi Jamie. I love you.
Jamie: I love you, too! Now all of our problems are solved.
Kanan: You know I’m still somehow alive off-screen, right?

We love clever commentary from Jamie and Angela fans. Comments don’t appear right away but we’ll get to them.

Jamie "Ghost" St. Patrick loves Angela Valdes. So what if he's a drug distributor for a Mexican cartel? So what...