Warning: We are here for Jamie, Angela and Angie’s perfect hair. Our love is strong. If you don’t think sweet dreams are made of this pairing, then you will get mad. If you think Angie’s a homewrecker, you will get mad. Proceed at your own risk. 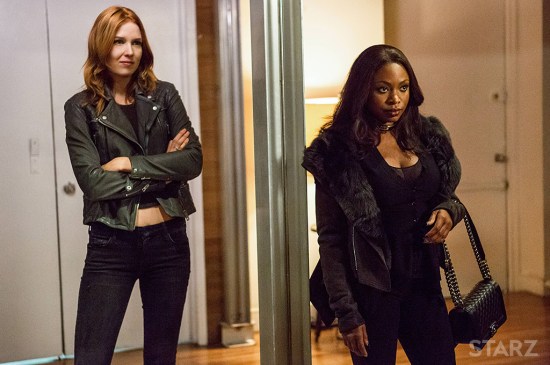 When Angela Valdes strolled into James “Ghost” St. Patrick’s nightclub, feelings reignited for the high school sweethearts. Their only roadblock was that Angie didn’t reveal that she was part of an FBI drug task force looking to nail someone named “Ghost” and Jamie never mentioned that he’s a successful drug distributor, who goes by the street name “Ghost.”  We’ve all been there, right? The crazy kids patched things up and Angie even destroyed evidence implicating Jamie. Now Jamie has gone legit and can spend his days stroking Angie’s magnificent chestnut tresses. The only fly in the ointment is that Tommy Egan–Ghost’s former business partner, dragon and white soul brother–has beef with Ghost and has been ordered to kill G. Let’s go!

Tommy really doesn’t want to kill Ghost, but Lobos has threatened to kill Egan’s girlfriend, Holly, and their dog. Lobos doesn’t issue idle threats. It goes like this:

Holly: I’m just going to keep posting these lost-dog flyers all over the neighborhood. I hope Bell’s not hurt.

Tommy: Upside, she is not hurt. Downside: Bell is dead. She got murdered because of the plot about drugs or something.

Tommy:  Nevermind. I can get you a new dog.

Holly: “You can’t just replace Bell. That’s like saying if you died, I’m just gonna go out and fuck another guy right away.”

The Audience: Who are you trying to fool, girl? You know at the very least you’d be offering a hand job. Oh, and another thing. You two barely paid attention to that dog. She was one step away from starring in a sad dog video with Sarah McLachlan singing that “in the arms of an angel” song.

Jamie goes to the mansion in the sky that he shared with Tasha and their two or three children. One day, I’m going to rewatch because I am quite sure they had three kids but you never see more than two at a time. It’s probably a budget thing. What they save on paying that kid, goes into maintaining Angie’s magnificent tresses. It goes like this:

Jamie: Hi Tasha, thanks for allowing me to see my kids.

Jamie: Okay, just give this check to Tommy. After he gets it, I’m officially out of the drug business. He won’t return my calls because he’s pretending to look for a dog that was whacked for plot reasons.

Tasha: He doesn’t like me anymore either because of the plot. He found out that I helped you frame your former boss Kanan to go to prison so you could get rich distributing drugs. You “killed” him last season. Tommy was a Kanan fanboy. He does Kanan cosplay on the weekend. He mad. That’s sad because he was my Stan for the first two seasons. I’ll give him the check, but first I have to go talk to my frenemy Keisha.

Keisha:  Thanks for visiting this beauty salon, which I apparently own. You are being way too lenient about your estranged husband being in love with Becky with the good hair. Where is your fight? Well, if you need money you can handle the books at my salon.

The Subtext Fairy: Keisha is saying “Well, Miss Bougie, I’m going to pretend to be nice, but I am relishing your fall.” Next time, she’ll ask if Tasha wants to be the shampoo girl.

Tasha gets Tommy to meet her at a diner. It goes like this:

Tommy: I’m just here for the check. Kanan told me that you are a lying liar that lies. I am an up-and-coming druglord but I’m also judgy.

Tasha: Yeah, remember that time you didn’t tell me that Ghost was cheating?

Tommy: I’m going to say something really mean to make you feel even worse about Angie. I won’t mention that I always hated her and was totally loyal to you. I’m sort of a dick right now.

Tasha: Here’s your check. I’m sad and I have to go my mansion in the sky and stand in the kitchen with a whisk.

The Audience: We feel kinda bad for Tasha right now. But we feel worse about the fact that there has not been another romantic Jamie/Angie scene. We are getting way too much plot about Ghost’s nightclub business. Yes, this is a show about drugs (wink, wink), so we’ll accept this major plot line about something, something. If we don’t see some of that sweet, sweet chocolate and dulce de leche swirl, we are going to get salty.

You know what else is salty? Poor Holly’s tears because nobody has seen Bell, who now resides at the Rainbow Bridge. Jesus, this is sad. Tommy’s big check cheers her up. It goes like this:

Holly: Goodbye grief, hello money! Want me to take it to the bank?

Holly: Okay, I will give you a blow job, while secretly taking the che

ck. Yes, The Audience, you were right about me. You just go ahead and slut-shame me but I don’t care. I’m as rich as Nene. I’m going to take this to the bank, but it won’t work because the only thing I know about money involves removing dollar bills from my thong.

We finally get to see Angie, she is not with the right St. Patrick, though. It goes like this:

Tasha: Hi, hussy. I just came to see where my two or three children are going to stay when they visit their father.

Angie’s Hair: Nope. I’m just going to do the messy ponytail of discomfort.

Tasha: Let’s see how those magnificent chestnut tresses hold up to taking care of my two or three kids. I have a young daughter named Yasmine. She is sill being potty-trained. I have two other kids named Tariq and Raina! I have three kids! I don’t remember if Yasmine was a baby in the first season, but it doesn’t matter. The record shows that I have three kids.

Angie’s Hair: You better make sure these brats don’t take up the time you need to style me.

Tasha: Now that I have made you feel inadequate, my work is done. When the kids are over tonight, realize that parenting is horrendous. The kids will make you feel like a failure, Ghost won’t pay that much attention to you and there will be no sweet, sweet, swirl tonight. Bye!

This episode could be titled “Everyone’s Bad Day.”

At Casa de Tommy, things are rocky. It goes like this:

Tommy: Hi Honey. How was your day?

Holly: I’m a dumb ass who doesn’t understand how banks work. But I want us to be full partners.

Tommy: You are a dumbass, but we can be full partners, I guess. For the record, Tasha was the one brainy enough to handle the books. She studied accounting but dropped out of school to marry Ghost.

The Audience: We feel bad for Tasha right now. She deserves a better life and someone to peel the potatoes so she can relax.

Holly: So, tell me something full-partner-y.

Tommy: Bell is not coming back. Lobos threatened to have one of his minions kill Bell or you if I don’t murder Ghost. Bell was whacked. This all has to do with plot, something, drugs. I tried to kill Ghost tonight, but I couldn’t do it. “He was my brother, my whole life, my family.”

Tommy: Who is at the door?

Holly: I did something partner-y without you.

Tasha: I hear you have a problem and need me to fix it.

I’ve going to binge on Power the past few episodes this week so come back!

We love the witty comments from Power fans. They don’t appear right away but we promise we’ll get to them after we pull husks from corn.

When Angela Valdes sauntered into James “Ghost” St. Patrick’s nightclub, the high school sweethearts picked up where they left off....