Reunited high school sweethearts Jamie “Ghost” St. Patrick and Angela Valdes are in love. Their romance is like a screwball comedy. He’s a successful drug-distributor, she is an ambitious federal agent. Tommy Egan is Jamie’s friend, partner, and dragon. Angie has been searching for a shadowy figure named Ghost and wants to believe that Tommy is that man, although she has reason to suspect her lover. It’s all one raucous comedy. Let’s go! 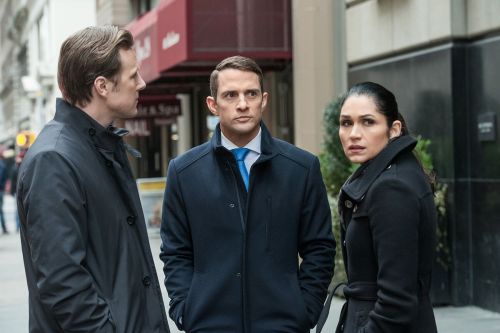 Drug lord Felipe Lobos is in New York City to collect money from Ghost. Lobos lounges in an indoor pool with champagne and a cigar while a pretty gentleman gives some oral love from underneath the water. Is that a thing? How does one breathe? We’ll never find out, a female assassin tries to take down Lobos, but it’s pretty Aquaman who gets fatally shot. There are some incompetent hired guns on Power. The late Pink Sneakers attempted to gun down Jamie and missed. Lobos kills the shooter, leaving his long-suffering minion/boy toy, Javier, to clean up. Lobos acts squirrelly and talks to the corpse about the Jiminez brothers. He’s going to be waiting awhile for that response. He also appears to be wearing guyliner. Lobos is everything.

At the mansion in the sky, the estranged Mr. and Mrs. St. Patrick discuss mundane parental matters. It goes like this:

Jamie: So I’ll take the kids to Medieval Times or something. How many children do we have? I thought it was three, but I only see one or two at a time so I really lost track.

Tasha: The set designers add square footage every week, maybe one of the kids wandered to another wing.  So uh, you never thanked me for stopping Tommy from gunning down your lover, Angie.

Jamie: I already bought you a Hallmark card, some carnations from the supermarket and a teddy bear holding a little helium balloon, what more do you want?

Tasha: I have a good idea, since Angie is targeting Lobos, let’s kill him. That will end your girlfriend’s federal investigation. He’s our drug connection, but we’ll find someone else. This is my idea. You will agree to it and then I will get mad later.

Jamie discusses the scheme with Tommy, it goes like this:

Jamie: Hey, Angie doesn’t really want to take us down, the feds are after Lobos, let’s kill him.

Jamie: If we get rid of him, we won’t get caught and we can walk away from the drug trade.

Jamie: Fine, I’m going to go talk to Lobos. We will meet at the real-life New York spot, the Monkey Bar. I know this because I will stare at a Monkey Bar card later in this episode.

Tommy: Whatever, I’ve got to go give too much information to our former employer Kanan, who is plotting to take us both down. I’m too much of a fanboy to realize it. Hmm, wonder if he’ll be at New York Comic Con, I’d like to do some Kanan cosplay.

Jamie meets Lobos at the Monkey Bar. It goes like this.

Lobos: The hours are flexible, you can work from home and we have a top-notch dental plan. Take some time to think it over. Because the Power writers are delightful, I will end this scene by ordering a Shirley Temple.

Yay, Kanan is back! I missed him. So did his son Shawn, it goes like this:

Shawn’s Mom, Jarita: You come home late every night. I have to treat you like a child because you are a backward overgrown simpleton. No PlayStation for a week.

Shawn: Aw, shucks Ma. Hey, Pop, I tried to get in touch with you, where were you all this time?

Kanan: I went shopping. After I returned from a ten-year prison stint, I realized my outerwear was dated. I was also plotting something. Do you have any info on your Uncle G. for me?

Shawn: Nope, when it comes to being a mole, I am completely useless. I know nothing about his drug business despite the fact that I spend all my time lurking around Chez St.Patrick.

Kanan: Fine, I’ll go talk to my protégé, Dre; he is the son I always wanted and should have a bigger role on this show. Actor Rotimi Akinosho is going to be a big star. Dre will give me useful information on the rift between Ghost and Tommy and the growing revolt.

Jamie pays Angie a surprise visit. It goes like this:

Jamie: How was your day?

Angie: I spent time at a spy shop so I can track your phone. I see all of your texts, incoming, and outgoing phone calls. I also had a big FBI meeting. They know where Lobos will be tomorrow and you’re screwed. Now tell me about your day.

Jamie: Meh. I went shopping for some obvious product placement at Bally. Here is a pair of expensive sexy shoes. I gotta return a text message. It’s a text from my daughter, Raina, when I’m done with this text I will do an adorable thing and kiss the phone. I love my two or three kids.

Angie: I’m going in the other room to spy on your text and then I will put on the shoes and get naked.

Tommy gripes to Tasha about Ghost. It goes like this:

Tasha: That was my idea.

Tommy: He wants to get out of the drug business.

Tasha: What? No, he can’t do that. The high-paying world of crime is much better for the children than going legit.

Tommy: You know once Lobos is dead, G. is free to leave with Angie, right?

Tasha confronts her husband and accuses him of wanting to leave her broke and abandon the kids, which is a really fucked up accusation because Jamie is still a caring dad and wouldn’t just dump his two or three kids, he’d most certainly care for them. He even kissed the phone. Tasha goes back to the mansion in the sky so Shawn can clumsily paw at her despite the two or three kids who are wandering somewhere about the mansion in the sky. Tasha’s best frenemy Keisha shows up for pizza night. It goes like this:

Keisha: I’m in this scene for four reasons:

The Subtext Fairy: She means she resents you so much, she may tell Ghost. 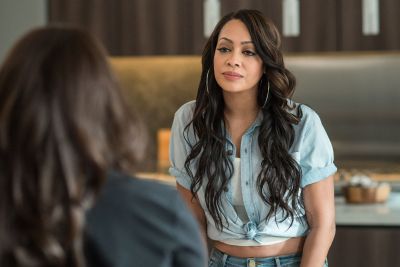 Kanan sees his son galumphing out of the mansion in the sky and asks about his son’s relationship with Tasha. Shawn claims he’s using her for information. Oh, please, Shawn, you have no stealth at all. He does mention that Tasha told him that Ghost has a meeting at The Carlton. Kanan uses the information to round up lower-level associates Ruiz, Vladimir, Dre and Drifty to stage a coup against Ghost and Tommy.

The feds think they’ll find Lobos at a West Side warehouse the following day, but Angie’s spying reveals that Jamie will be at The Carlton. It goes like this:

Angie: Here I am sitting at my computer making sure the audience is aware of the fact that the meeting place is at The Carlton. Oh, look I just searched for it online, it came up. Let me repeatedly say “The Carlton.” Everyone in this episode will refer to The Carlton as much as possible. Drinking game!

Before the raid, we get all kinds of rewindable Jangela sex. The chemistry is off the charts. There are contortions and moves you’ve only seen in Cirque du Soleil. Do not try this at home. Well, try it, but be careful! This scene is the very definition of “I’ll be in my bunk.” It’s kind of a threesome because Angie’s luxuriant chestnut tresses are flipping all over the scene. With all the product placement on this show, why don’t we ever see lingering shots of L’Oréal on her counter? That is a missed opportunity, L’Oréal. You should give Lela Loren an ad campaign.

To save Jamie, Angie wants to leave town immediately, she says she doesn’t need clothes. That should be a good enough offer for Jamie, but he says that’ll have to wait for another day. He heads to his meeting. Angie looks sad, but she even cries pretty as she tails Ghost, knowing that the FBI is ready to swoop in. She spots Jamie entering The Carlton and dutifully calls it in. Good news, Tommy arrives just in time for Angie to convince herself and the other agents that he’s really Ghost. The feds beat Manhattan traffic and respond within moments. Power excels at authentic location shoots and realism, but nobody gets through NYC traffic that fast.

In the meantime, Lobos prepares for the meeting by strolling around his suite at The Calton with a machete, he’s really pissed that Jamie didn’t accept that promotion. From outside Angie listens to the raid through a walkie-talkie, shots are fired. It goes like this:

Eden Roc Miami Beach, a luxury Resort, and Spa: All I’m saying is this kind of shit does not go down here.

The Carlton: We’ve already appeared on Law & Order SVU and The Real Housewives of New Jersey. There’s no such thing as bad publicity.

The Monkey Bar: How come I only got one reference?

The Carlton: You gotta pay to play.

Lobos is captured, as is Tommy, who emerges hurling invectives at Angela. You know what Tommy? Nobody likes you right now. You don’t ever criticize Angie! Angie is smart and talented and beautiful and nearly perfect so just shut up! In any case, there is a body, it’s Javier, Lobos’ minion. Aw, moment of silence. Fare thee well, Javier. Angie’s relieved it’s not Jamie. She phones Jamie to find out where he is. He’s watching the whole thing play out with a clenched jaw.

Simple Shawn runs to his father to accuse Kanan of using the info he gave him to set up Tommy. Kanan tells his son how G. and Tommy framed him to go to prison all those years ago. Kanan argues that G. sent him away, sent Tommy away and is the only one standing in the way of Shawn’s relationship with Tasha. Shawn volunteers to kill his Uncle G. It’s hard to believe a man as sharp as Kanan sired such a lunkhead.

At the task force booze-fueled victory celebration, the feds laud Angie and pretend they haven’t been mean to her, continually patronizing her and bordering on sexual harassment. As the self-congratulatory jackasses party on, Angie is glum, but her hair, which is slicked back into a ponytail, is still on point. As she slips out, Jamie sends Angie a text message, letting her know he has a new phone. Burn!

I'll say this for Ghost St. Patrick, the man is an optimist. Just because, he's a drug distributor and Angie...