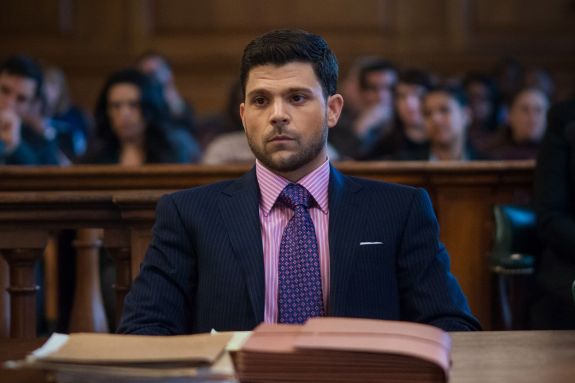 James St. Patrick had everything, a family, a mansion in the sky, a thriving nightclub and a secret identity as a major drug distributor, Ghost. He had a loyal best friend, business partner and dragon, Tommy Egan. Well, he didn’t actually have everything. He didn’t have his high school sweetheart Angela Valdes. She sashayed into his club and they had no real obstacles, except for her being part of an FBI task force, determined to put away Jamie’s boss, kingpin Felipe Lobos. One thing led to another in this screwball comedy and Angie nailed Lobos and Tommy, whom she wants to testify against Lobos. Jamie narrowly missed capture. When you’re in love, you let a few things slide. You don’t nitpick. Don’t tell Mr. TV Recaps I told you this, but he thinks you’re supposed to shake all beverages. He doesn’t just shake orange juice, like a normal person, he shakes milk. Who does that? Who shakes milk? Are you supposed to shake milk? I don’t know, we’ve been together for two decades, maybe he’s right. Mr. TV Recaps overlooks the fact that I can’t just watch Power quietly like a normal person. There’s a lot of gasps and talking back to the screen and carrying on when Power is on. Power is the kind of show you watch with sound effects.

In any case, we overlook each other’s foibles. Angie really wants to do the same thing with Jamie. Let’s go!

Angie’s boss Mike Sandoval is impressed with the way she has handled the Lobos case. He flirts in Spanish about her promising future. Sandoval is a little shady, no? Hot, but shady. Of course, Angie’s jealous ex-boyfriend, current co-worker and permanent doormat Greg Knox watches all this with pursed lips because he knows that Angie is somehow involved with Jamie. Greg is not Team Jangela or Jamela, which I’ve been informed is the correct Jamie/Angela portmanteau. Greg is Team Valdox, which is a horrible shipper name, so he should give up.

Tommy is in the slammer. He handles it like a badass, which is probably the only way one should handle prison. you don’t want to go in all soft like Tobias Beecher. Orange is a tricky color to pull off, but surprisingly, Tommy wears it well. Seriously, Piper Chapman wishes she could pull it off like that. Seriously, though, Joseph Sikora plays the scenes brilliantly. It’s the facial expressions and the way he moves through the scenes. Even the extras playing off of him are good. There was some woman holding a cup of coffee, did you notice her watching the strip search? Whoever she is, she’ll go far.

Tommy is led into the courtroom for his bail hearing. It goes like this:

Tommy: Hey, there is another man sitting at this table, I wonder who it could be?! I’ll behave in a slightly aggressive manner.

Other Man: Hi, my name is Joseph Proctor. I am wearing a suit and I am sitting at the defendant’s table. I’m probably your lawyer. Have you never seen a courtroom drama? Oh, look, here is the opposing attorney, Angie Valdes. Damn, that is some pretty hair.

The Judge: I agree. Bail denied, but not the beauty of those rich chestnut tresses. Can you suggest a creme rinse?

After his bail hearing, Tommy’s first call is to Tasha. Mrs. St. Patrick then loudly confronts her husband at the hotel in the sky. It goes like this:

Tasha: I will now berate you because you have poor seduction skills. That’s why you couldn’t get Angela sprung enough to prevent this from happening. I told you to do a better job in bed in order to “control her mind.”

Then Audience: First off, Jamie knows what he’s doing when it comes to sex so just be quiet. And sex as mind control? Really, Tasha? Ugh. That doesn’t even make sense.

Tasha: You’re selling out Tommy, just like you sold out Kanan.

The Audience: Kanan? Are we Kanan superfans now?

Tasha is ready to leave Manhattan and she tells Keisha about her plans. It goes like this:

Tasha: I’m going to run off with Ghost’s money and his kids.

Tasha: It’s cool, the kids and I will live under assumed names. They seem to prefer their dad, but it’s not like they are old enough to just call Ghost. I spend a lot of time standing around so I don’t know if I have marketable job skills, but I’ll figure something out.

The Audience: Okay, let’s think about this Tasha, you live in a mansion in the sky, the marvelous set designers add square footage every single week so you may not even be able to find the kids in a hurry. You used to have three kids, we think, and now we only see two, one of them is probably lost. Where’s Chuck when you need him?

Tommy is suspicious because Ghost wasn’t taken into custody and blabs to Proctor, who was hired by Ghost, that G. and Angie are lovers. Tommy suspects  they are in cahoots and making him the patsy.The feds are willing to cut a deal with Tommy if he’ll snitch on Lobos. It’s not happening. Since Tommy won’t snitch, the feds note that he’ll be in prison forever.

Kanan and Dre give Shawn a lesson in Hitman 101, It goes like this:

Kanan: Are you ready to murder Ghost in cold blood? I need him out of the way so I can take over his drug network.

Shawn: Yep! Don’t worry Dad. I’ll run off with Tasha and her two or three kids.

Dre: While I admire your can-do spirit, this is going to be challenging work.

Shawn: I’ve got this. One question: Which way do I hold this gun thingy?

The Foreshadowing Fairy flutters in and gives Shawn some side-eye.

Angie makes a couple of visits to Ghost, and they dance around the issue of Ghost’s identity. We are treated to some husky whispers and long embraces, but Angie is in no mood for it, so we are cheated out of steamy Jangela sex.

Tommy is taken to see Angie. he makes some vulgar references to her lady parts and insinuates that he could rat out G. They are unexpectedly summoned to the courtroom, Joe Proctor asks the judge to release Tommy. There was some funny business with that sketch used to ID him. There is no probable cause so he’s released. Tommy is delightfully smirky as he leaves the courtroom. The judge reprimands Angie that someone on the FBI staff messed up. Jamie picks up Tommy and they act cool with one another. It looks like maybe Tommy’s not suspicious anymore, but he probably still is, right?

Angie goes to Truth to yell at Jamie. It goes like this.

Angie: Remember all those times I had an inkling that you might be Ghost and I rifled through your belongings and spied on you?

Jamie: Uh-huh. I did my own snooping and I outsmarted with you. I figured out that there was some funny business with the sketch so I sabotaged your case. Now, let’s stop fussing. We can make all of our dreams come true. Pack your bags and let’s go to the Eden Roc Miami Beach a luxury resort, and spa. I’ll stroke your magnificent hair all day and we’ll live happily ever after.

Angie: I don’t want to go to the Eden Roc Miami Beach, a luxury resort and spa. I wanted to live happily ever after with Jamie, not Ghost. You’re just “a fantasy.”

The Audience: Yes, Jamie is certainly a fantasy. Kiss and makeup. There’s only one episode of this season left. We need to see some happy Jangela.

Angela: Nope, I will now walk out in tears. I’m even pretty when I cry.

Greg: Don’t mind me, I’ll just lurk across the street and secretly watch you because I’m kind of creepy and probably have a wall covered with pictures of you.

Jamie’s bad day continues with Shawn attempting to murder him. It goes like this:

Shawn: I’ve been acting shifty all day because I was planning to kill you, but I made rookie mistakes so I didn’t get to do it yet.

Jamie: Look, Angie won’t let me touch her glorious hair, I don’t have time for this.

Shawn: Well, I have to kill you. I’ll waste time talking about Tasha and how you set up my father, Kanan, so he had to spend a decade in prison. Now, how do I work this gun thingy?

Jamie: So you’re involved with Tasha, huh? Thanks for blowing up her spot like that. You’re like one of those movie villains who always has to give the hero a little speech, thus giving said hero a chance to defeat said villain. I’m just going to take this gun away from you and yell at you. I could kill you right now, but I’m giving you a chance for a better life. Don’t turn out like Kanan and me. Whatever you do, don’t stop to make any more speeches, just go.

The Foreshadowing Fairy: Sigh. Just get on with it, my wings are getting tired.

Shawn: Okay, maybe I will go visit my father to make a speech. Ghost was right, Kanan should never have asked me to kill someone. I hope he doesn’t get mad.

Kanan: I’m mad. Let me show you how to use a gun thingy as I kill you.

Tasha: I wonder where Shawn is. We’re about to have a great life together on the lam.

At the FBI offices, Greg faces off with Angie.

Greg: I know you’re involved with Jamie. He’s going to prison and I’m going to make sure that happens tonight.

Angie: You’re right, I loved him. He deserves to go to prison. Hey, let’s wait until the morning to make sure we have a solid case. Show me everything you have.

Greg: Okay, I’ll show you every bit of evidence. I’m sure glad you don’t love him anymore.

Angie: I’m just going to ransack your office when you turn your back and probably destroy all the evidence.

Reunited high school sweethearts Jamie "Ghost" St. Patrick and Angela Valdes are in love. Their romance is like a screwball...