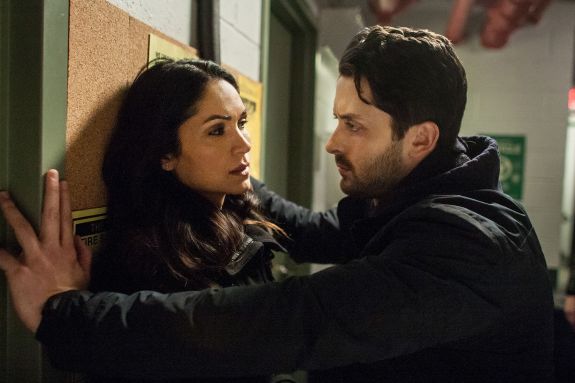 Jamie “Ghost”  St. Patrick loves Angela Valdes. So what if he’s a drug distributor for a Mexican cartel? So what if she is a federal agent working to nab Felipe Lobos, the head of the cartel? So what if Ghost deliberately screwed up Angela’s case and Angela destroyed evidence against Jamie and now she’ll probably get fired from the FBI? So what? This is Jangela or as I’ve been informed Jamela. So what if they have multiple portmanteaus? Jamie and Angela belong together no matter what and that’s that. This episode of Power is everything. Let’s go!

Poor Angie looks at mementos of her relationship with Jamie. It goes like this:

Angela: I am getting rid of all of my reminders of Jamie.

The Audience: We see you’ve got a snapshot of the two of you from high school tucked in a diary. You probably practice writing your future signature, “Angela St. Patrick.”

Angie: I’m also getting rid of this magnificent diamond necklace and the heels he bought at Bally.

The Audience: Let’s not be hasty.

Angie: I’m also changing his name on my phone to “Do not Answer.”

The Audience: Girl please, you didn’t even throw those things out, you just put them in a tote bag in your closet.

Angela: I’m serious! Can’t you see that my magnificent chestnut tresses are pulled up into the bun of despair?

Angie’s in hot water with the FBI. It goes like this:

Sandoval: You are in hot water. Bye.

Greg: Hi, I have information against Angie. She was working with Jamie St. Patrick.

Sandoval: How do you know all this? Was it because you were stalking Angela and taking pictures of her and being kind of creepy?

Sandoval: Look, every man on staff has been close to being brought up on harassment charges, we all want to stroke her beautiful chestnut tresses. You’re just mad that Angie loves Jamie St. Patrick so you’re making up stories.

Sandoval: Have you seen Jamie? Obviously you’re jealous. Angie says you are harassing her. Stop being a stalker. She registered an official complaint. You’re in hot water.

The Foreshadowing Fairy: This is not going to end well.

Tommy Egan, Jamie’s best friend, business partner and dragon hangs out with Jamie’s wife, Tasha, at the St. Patrick’s mansion in the sky and crows about how Jamie got Tommy out of jail by messing up Angie’s case. He thinks that means Jamie doesn’t love Angie anymore and was just using her. Tasha appears to be kind of hopeful, but she’s still looking for her limo driver/awkward lover, Shawn. Apparently she is still waiting to run off with him and her two or three kids. It’s gonna be a long wait. In the meantime, she shows up at her estranged husband’s hotel in the sky to ask if he really did put his family ahead of Angie. She looks cautiously optimistic. Jamie looks optimistic that she’ll get lost when he tells her he knows about her affair with Shawn and proceeds to mock it.

Ghost visits Tommy, who surprisingly still has his dog. Tommy is crushed to hear that his hero Kanan ordered a hit on Jamie. Fortunately, Kanan’s clumsy son, Shawn, was a lousy hitman. They don’t know that Kanan’s brand of tough love includes gunning down his own son. Well, kids have to learn, right? Tommy goes to Kanan and pretends that he’s turned on G. and wants to team up to bring St. Patrick down. Kanan, who might be the most clever character on Power, drops a couple of truth bombs: Tasha probably helped Ghost set up Kanan to go to prison and G. did not kill Pink Sneakers in Miami, he lied about that, Kanan’s young protégé, Dre, was the one to take her out. A spat ensues it goes like this:

Tommy: Hi Jamie, you haven’t been honest with me. Even Tasaha, who I love more than anyone in the whole world may have deceived me.

Jamie: Let’s talk about your big mouth. You told your girlfriend Holly Weaver all about our business and that almost led to our downfall because the feds pulled her in for questioning.

Jamie: I don’t have time for this. I’ve got to go deal with Simon Stern who swindled me out of control of my nightclub, Truth. I’m working with his wife, who kind of hates him. I will not only regain control of Truth, but I’ll get to take over some of his other clubs, too. I also have to try to get back with Angie, but she’s going to be mad at me and keep her hair in a bun so that I can’t run my fingers through it.

Tommy: Fine, I’m going to go walk my dog in the park.

The Audience: Uh-oh, we’re worried about the dog. This scene has a real Law & Order: SVU vibe to it, right? Doesn’t it remind you of one of those park shots where some random character finds the body?

Tommy: Let’s focus. I’m only dropping the leash so that Holly, who has been missing, will grab the leash. I will threaten to choke her out in broad daylight until she informs me that Ghost ordered her to leave town. I won’t believe her until she gives me a bag filled with cash and a fake ID. I’m beginning to question my loyalty to Ghost.

In the meantime,  Jamie visits Ruiz and urges him to leave town. Lobos gets stabbed in his cell. Dre meets with Jamie to report on Kanan and then he goes back to Kanan to report on Jamie. It seems like he wants to align himself with Jamie, which is the smart move. Jamie has a good lifestyle, he has a  mansion in the sky and the set designers regularly add square footage.

It’s time for Angie’s court hearing. She’s going to lose her job and maybe even her freedom once Isobel Ruiz testifies that she helped Angie get up to some shenanigans to make the case against Tommy stick. There is some important plot about the sketch used to identify Tommy as Ghost. It didn’t involve Jangela sex or her lovely hair so I wasn’t paying attention. In any case, Isobel doesn’t show up, so there is no case against Angie and her career is saved. It goes like this:

Cooper Saxe: Hi, I’m the Assistant US Attorney. As it turns out everyone in the Lobos New York network has gone missing or been killed within 36 hours. Drifty and Vladimir are dead. Someone killed them and placed something that looks like tarot cards on the bodies. Ruiz is missing and someone just stabbed Lobos in prison. He may not make it. You aren’t in hot water at all. I can go back to bordering on sexual harassment now.

The Audience: Not Lobos! He’s such a fun, quirky villain. #SaveLobos

Jamie has one more thing to take care of. Kanan shows at a warehouse to meet with Tommy, but Jamie is there with a gun. It goes like this:

Kanan: I am such a badass that I will berate you, whack you with a 2×4, put a plastic bag over your head and make a speech about how much I hate you.

Jamie: I will take advantage of your chattiness to stab you. Then I will pour gasoline on your body, toss a lighter and walk away. You will almost certainly be dead.

The Audience: Oh, no! We love Kanan! He can’t be dead! #SaveKanan

Nagging Suspicion: 50 Cent is a producer, don’t get all panicky yet. You haven’t seen the end of the episode.

Tommy shows up late, which Jamie finds suspicious. They engage in a war of words. It goes like this:

Tommy: I am done with you right now. You’re shady. I want to take over the business. I’m pulling a gun on you.

The rest of the episode is crazy. It goes like this:

Angie: Hi Jamie, I just came to your hotel room to say that I should walk away from you.

Jamie: Yep, you should, but I love you. All of my associates are gone. I’m not Ghost anymore. I’m just Jamie now. I have a few nightclubs and we can resume our romance and do things like visit the Eden Roc Miami Beach, a luxury resort, and spa.

Angie: I love you.

The Audience: Told you so. Start kissing now, please.

At the mansion in the sky

Keisha: I can believe it, your plan to run off was stupid.

Tasha: Uh-oh, my phone is ringing.

Keisha: I will accompany you to the morgue to see Shawn’s body.

In the lobby of Angie’s apartment.

Jangela: We are so happy and in love. Look, Angie is no longer sporting the bun of despair. Her tresses are flowing again.

Angie: I’m going to randomly throw out some trash now.

Greg: I am going to wait until Jamie leaves and then corner you down here all alone and get way too close and creepy and I will threaten to get even with you and Ghost next season.

Jamie: Hmm, there is a blood stained card on my desk. I guess I’ll have a flashback to how I killed Drifty and Vladimir and maybe killed Lobos and made it all look like the Jiminez brothers were behind it.

Tommy: I will ignore Tasha’s calls, make up with Holly and we will go walk the dog in the park.

Lobos: Just calling to say that you should work for me, but first you have to kill Ghost or I will kill Holly and the dog.

The Audience: OMG, not the dog!

Jangela: Let’s spoon. Might as well give Team Jangela a thrill.

Extras: Wow, it looks like someone got out of the warehouse fire.

The Audience: Wait, what? How? He was surely burned up, did Kanan escape? OMFG! OMFG! OMFG!

Power: See you next year!

James St. Patrick had everything, a family, a mansion in the sky, a thriving nightclub and a secret identity as...