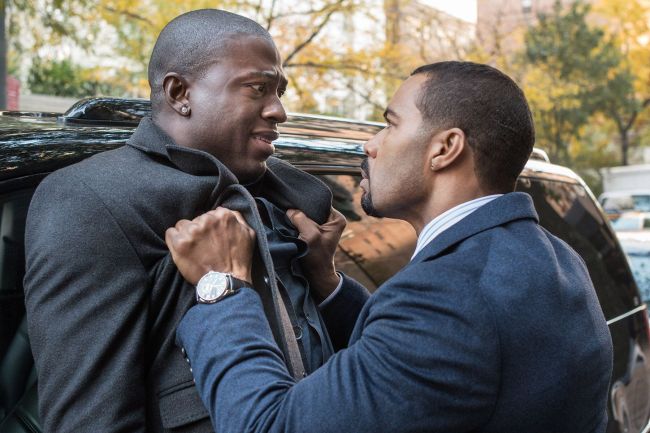 Jamie “Ghost” Patrick has a complicated life. He’s married to Tasha but in love with his high-school sweetheart, Angela Valdes. Jamie is a drug distributor. Angie is a federal investigator; she’s looking for somebody named “Ghost.” She suspects Tommy Egan, Jamie’s best friend, business partner, and dragon. Jamie also has to watch his back because his former boss, Kanan, who spent 10 years in prison while his protégées got rich, is plotting a takeover. You know what else is complicated? This episode. So much happens. Let’s go!

At their mansion in the sky, Ghost tells Tasha about his trip to Miami. It goes like this:

Tasha: Great job killing Pink Sneakers, the woman who was hired by Rolla to assasinate you. I love a man with initiative!

Jamie: Actually, the trip was a bust. I didn’t get to her in time. Some other man stabbed her. Before Pink Sneakers died, she told me that Rolla wasn’t behind the hit. Kanan is the one who pinned the blame on Rolla, so that’s shady. On the other hand, I did get to spend time being straddled by Angie, that was fun.

Jamie: Never mind. I finally got around to reading Cheaters for Dummies so I won’t have any more slip-ups.

Despite being kicked off the task force to bring down the Lobos drug cartel, Angie will not give up. She is not a quitter and has ways of getting insider information. Greg Knox, her former boyfriend, current co-worker and permanent doormat helps her out. She is literally just standing around being beautiful when Greg calls. It goes like this:

Greg: Here is the information you need to stay up-to-date on the hunt for Ghost.

Greg: No, you are no longer on the task force. You failed to impress US Attorney Mike Sandoval so now you have been reassigned. Despite the fact that I just called you, I am now mad at you.

The Audience: Angela is smart and sweet and beautiful and could star in shampoo commercials, shut up, Greg.

Greg: Okay, gotta go do your bidding now. Let me go ask Sandoval, if you can rejoin the task force.

Sandoval: Angela is beautiful and could star in shampoo commercials. After making some inappropriate sexual comments about her, I’ll give her another chance. Oh, and I forgot to say, shut up, Greg.

Tommy is on his way to do some work but has to deal with drama from Holly, who is in bitch mode. She demands to know what Tommy s doing and she wants to tag along to the business meeting. Why she thinks her previous job as a cocktail waitress qualifies her to be part of a major drug operation, is beyond me. She’s bored sitting around his apartment and threatens to break his vinyl including the Doobie Brothers. She talks about how she gave him a blowjob the previous night. Really, Holly? He can get that anywhere, but you do not mess with the Doobie Brothers collection! The Foreshadowing Fairy shows up to remind us that Holly is walking around with a target on her back. The Foreshadowing Fairy also loves the song “Minute by Minute” and considers taking down Holly all by herself. Tommy and Jamie’s right hand, Julio, drops by to see Tommy and Holly practically begs him to stay for a drink. Personally, I think walking around your boyfriend’s associat in a T-shirt and barely-there undies is inappropriate. She should be walking around in some dignified Spanx like a lady. Julio knows it’s not a good idea, to come in, but she keeps pushing. Tommy comes home with a puppy. Holly is not appreciative. Holly does not like puppies or the Doobie Brothers. Tommy is not appreciative of her behavior when he sees two glasses and finds out that Julio was there.

Shawn shows up at the mansion in the sky to re-enact junior high with Tasha. He tries to assure Tasha that he did not make out under the bleachers with her friend, Lakeisha. She sulks and gives him back his varsity jacket, so he stomps off to see Lakeisha. Isn’t Shawn supposed to just drive Jamie and Tasha around? He has a lot of time on his hands. In any case, when Shawn shows up at Lakeisha’s door, she greets him with this glorious line: “What, you left your sippy cup when you skedaddled out of here the other night?” I officially love Lakeisha. I guess there’s nothing on TV because Lakeisha provides the show’s weekly straddling scene and has sex with Shawn. It does not appear to be Shawn’s strong suit, but Lakeisha knows what she’s doing. It also gives her a chance to annoy Tasha. At lunch the next day, Lakeisha gloats about her night with Shawn. (She does imply that he is not at the advanced level.) Tasha is petulant, but Lakeisha speaks for the audience when she tells Tasha to just make up her mind. Honestly, dumping Jamie for Shawn is like going from Airforce One to a cramped seat by the bathroom in the last row of Economy Class. You know the row, the one where you have to wait the longest for the little bag of pretzels. Whatever, it’s Tasha’s choice. Her decision-making process involves rifling through Jamie’s pockets to see if he has finished his Cheating for Dummies reading assignment. He has not done so and has made the amateur move of leaving a receipt for Eden Roc Miami Beach, a luxury resort, and spa in his pocket. She calls the hotel, snoops around and they ask how Mrs. St. Patrick liked her in-room massage. She has had enough of Jamie, it goes like this:

Jamie: Well, I’ve had a long day trying to regain control of my nightclub. I also have to deal with the fact that Tommy and Kanan unnecessarily gunned down some associates. Tommy is apparently a Kanan fanboy so now he’s revealing way too much about our business and is one step away from dressing up as Kanan for some cosplay. I’ll just go home to my mansion in the sky and relax by listening to ‘Takin’ it to the Streets.’

Mansion in the sky: Sorry, cheater, Tasha has changed the code so you can’t come home. The concierge will only let you go up if you are approved. The set designers are adding square footage without you. Go find a hotel room in the sky. Tasha is done.

Rather than blame his inability to carry on an affair in secret, Jamie takes it out on Shawn, whom he thinks told Tasha about Miami. Shawn, who apparently has the code, goes up to the penthouse to creepily rifle through Tasha’s lingerie drawer. She blasts him for knowing about Angela and not telling her. Poor Shawn. He confesses about his night with Keisha. Why does he have to tell Tasha anything? Tasha is grateful that someone is being truthful with her. Honestly, I do not understand this relationship. Do you? If so, please enlighten me with a polite comment.

Angie’s task force presentation is spot-on. She makes a credible case that Tommy is Ghost. She does too good a job. With the focus on Tommy, the feds are now looking at his close associates, including Jamie. She goes to Jamie’s hotel room in the sky. Instead of a steamy Jangela straddling scene, they squabble about his marriage and her job and it’s a mess, but they make up.

Jamie and Julio are taking care of business when Tommy charges in and wants to fight Julio over Holly. Julio, Jamie, the Foreshadowing Fairy, the dog and the Doobie Brothers all make it clear that they dislike Holly. This offends Tommy who goes off to do whatever Tommy does these days. He’s probably writing fan fiction about Kanan. Jamie decides to deal with Holly once and for all. She knows too much about the business, is a blabbermouth and a general pain in the neck. He pays her to leave town. You know who is really good at his job? Greg. He watches Tommy’s apartment and spots Holly exiting. He nabs her on the street. It turns out that Holly has a rap sheet. She can go with him or she can be put under arrest and go back to Ohio. The Foreshadowing Fairy and the Doobie Brothers exchange high-fives.

Jamie has a drink with Kanan to fill him in on Pink Sneakers, he obviously has caught on that Kanan is up to no good. Jamie tells Tasha that he wants to come back home to protect her and the kids. Nope, she and the code are not buying it. Kanan, who also has the code, shows up with wine for Tasha and gifts for the kids.  Just have to say that 50 Cent is terrific. He expresses a lot in a subtle way. He has a killer smirk. Honestly, he doesn’t even need dialogue. Neither does Naturi Naughton. The woman could teach a masterclass in delivering side-eye. There is an entertaining scene involving his smirking and her side-eye. In any case, she takes the gifts and gets rid of him. You know why Tasha doesn’t need Jamie’s help? Because she has got a gun in her waistband. Tasha has given badassery the code.

We love smart, funny and polite comments so please leave one. They don’t appear right away, but we’ll get to them. Thanks!

Power Preview: “You’re the Only Person I Can Trust”

Poor Ghost. He had such a lovely time in Miami with Angie, but his return to New York is steeped...