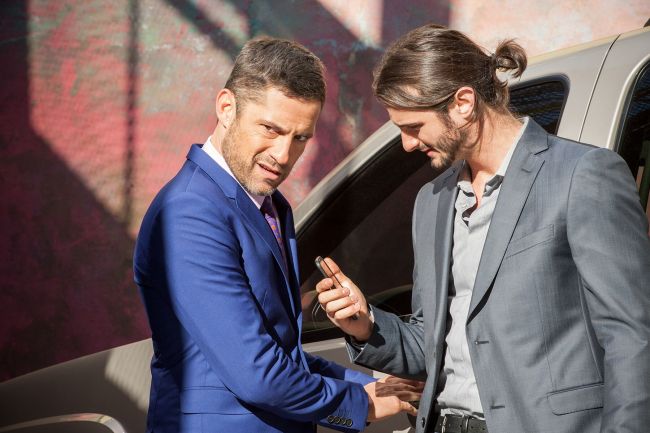 High school sweethearts Jamie “Ghost” St. Patrick (Omari Hardwick) and Angela Valdes (Lela Loren) reconnected and fell in love again. They have a few wrinkles to iron out, such as where they’ll reside once he divorces his surly wife, Tasha; the St. Patrick’s parental custody arrangement and how much counter space Angie will need to store the hair products that keep her lovely tresses on point. Jamie and Angie must also make sure their careers don’t get in the way. Let’s say for instance that Angie is a federal agent tracking down an elusive drug distributor who goes by the street name “Ghost,” it sure would be troublesome if she zeroed in on Tommy Egan (Joseph Sikora), Jamie’s best friend, partner and dragon because she suspects that Tommy is Ghost. Oh, can you imagine the headaches if Tommy was loose-lipped and told his sketchy girlfriend, Holly, all his business including Ghost’s identity? That would totally suck because then the feds might pick her up and encourage her to rat out Tommy. Welp, no reason to worry about all that, right? Let’s go!

Holly owns this episode and Lucy Walters really shows off her chops displaying vulnerability one minute and bravado the next. Despite her puffy eyes, restless legs and gnawed on cuticles (Nice job, show!) Holly turns sassy when agent Cooper Saxe interrogates her about Tommy. Turns out Holly has a rap sheet, her crimes include a country club heist, which is delightful and makes me love Holly a little bit. Saxe threatens to send Holly back to Ohio, forcing her to eat at the Olive Garden if she doesn’t cooperate.

Even though Angela is responsible for bringing in Holly, her boss Mike Sandoval will only let her watch from the surveillance room. It goes like this:

Angela: I need to get in there and question Holly.

Mike Sandoval: Nope, you’re still on probation. Besides, you are so pretty that I want to stand here and look at you in a lustful way. I’m kind of begging to be the subject of a sexual harassment suit. Come a little closer, I want to pet your hair.

In the meantime, Ghost is having the most vexing day. It goes like this:

Jamie: Here I am alone in a hotel room since Tasha quite understandably kicked me out after discovering that I was running my fingers through Angie’s beautiful hair. I’m surprised that these accommodations aren’t more spacious because I reside in a mansion in the sky that the set designers add square footage to on a weekly basis. My suite at Eden Roc Miami Beach, a luxury resort and spa was roomy enough for a family reunion. I’m not sure what hotel I’m at because aside from my big-ass Samsung phone, there’s no obvious product placement. It’s still a deluxe room, the hotel distributes newspapers. Hey look, here’s the New York Post, which features an article lauding Simon Stern’s (Victor Garber) handling of Truth, the nightclub he swindled from me. FML.

The Audience: Sorry to hear you’re having a tough day, Boo. It’s still the morning, we’re sure the rest of your day will get better.

The Rest of the Day: Nope.

Jamie shows up at Truth only to find that Josh Kantos, his former employee turned Stern minion, has implemented a time card system. The staff must also remember to fill the communal coffee pot if they drink the last cup. Ghosts snoops around the office and the Foreshadowing Fairy gives him a nudge that something is amiss, but there’s no time to focus on that because Greg Knox shows up.

Ghost: I am aware of that, but you are not aware of the fact that Angie actually loves me and told me she’s with the FBI.

Greg: I have suspicions and will question her later. What’s Tommy like?

Cartel kingpin Felipe Lobos phones Jamie, probably from a Samsung, to demand his drug money, those purple suits aren’t going to buy themselves. Ghost goes to Carlos Ruiz (Luis Antonio Ramos) and instructs him to kill the Serb. I have no idea who that is about because I spend most of my hour of Power focusing on Jangela, Angie’s sable hair and the blatant product placement. When Tommy visits Ruiz, he hears about the hit, balks and confronts Jamie. It goes like this:

Tommy: Killing the Serb is a bad idea. We will find a way to make him play ball. It involves a totally kick-ass scene where I and a team of extras will wear black motorcycle helmets, shoot somebody and blame it on Gypsies.

The Audience: Wait, what? Gypsies? Okay, this is an exceptional scene, the Power directors are top-notch, but we need to get back to Jangela now.

Tommy: That’s okay, my plan will work and then I will display comedic brilliance by summoning the cops to the scene and saying: “OMG. Not “Oh, my God.” I actually say OMG.

The Audience: We love you, Tommy. You are one of the most colorful characters on TV. Where’s Jangela?

Tasha: I will get extra salty because its’s impossible for me to understand that our son would miss his father. I will ground Tariq for two weeks and confuse him by suggesting that he ask his father why we split up. I will also yell at Tommy for not letting me know about the affair. I would yell at Shawn again, but he’s not around. I already knew my husband was having an affair, so I don’t know why I keep yelling at people.

Angie is frustrated to learn that the Ohio case against Holly won’t hold up, there is no warrant. She keeps that tidbit to herself. Greg knows that she’s upset and says Angie doesn’t handle it well when she doesn’t get her way. How would he know? He always gives in. Angie keeps digging and her investigation leads to the shooting at Truth. Saxe and Sandoval haven’t broken Holly so they tell her she’s going to the slammer. As a last ditch effort, Angie corners Holly in the ladies’ room to pump her for info on Tommy.

Holly: I recognize you because I saw you having sex with Jamie at the club. You know Jamie’s Ghost, right?

Holly: I mock you because and will now tell everyone that you are sleeping with Ghost.

Angie: Oh, boy, I need a clever gambit. How’s this? If you keep quiet for a while, I’ll get the Ohio charges against you dropped. There is no warrant, but you don’t know that.

Holly: Fine and you better get Tommy off the hook, too.

Angie: Okay, get out. I need to sob now.

The Audience: Oh God, we knew this moment would come, but it breaks our heart when Angie cries.

Angie: I’m going to pull myself together. Jamie just showed up. I’ll be frosty for a moment, but then he will look into my eyes and we’ll make Jangela fans swoon as we walk in the rain.

Greg: I am creepy so I’m going to watch you and Jamie walk in the rain from afar. I may be a stalker.

Power Preview: “Who You Are and Who You Want to Be”

On the next episode of Power, Tommy Egan attempts to keep his hands clean. Seeing as he's close to Kanan,...