Warning:  We are here to bask in the romance of Jamie, Angela and Angie’s perfect hair. If you think Angie’s a homewrecker and Jamie is Cheaty McCheaterson, avert your eyes. Proceed at your own risk.

When Angela Valdes strolled into James “Ghost” St. Patrick’s nightclub, the high school sweethearts had a lot of catching up to do. Angie was on an FBI drug task force looking to nab a baddie named “Ghost.” They worked it all out, so now Jamie spends his days stroking Angie’s magnificent chestnut tresses. Jamie has another great love–Tommy Egan. They broke up and now Ghost’s former business partner, dragon and white soul brother has been hired to kill G. Let’s go! 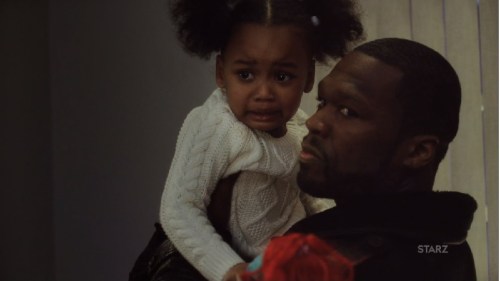 Jamie and Angela have some of that sweet chocolate/dulce de leche swirl sex. Angela is a little sad, though. It goes like this:

Jamie: What’s wrong?
Angela: We have so many obstacles. The writers are really sharp and they know we need friction to keep things interesting.
Angie’s Hair: F-ck that sh-t. When you are not happy, I don’t get to bounce and behave. I have to be in a ponytail or a bun or something that doesn’t allow the audience to bask in my glory.

Something is happening. It’s called plot. If only I’d paid attention to something other than love scenes, I’d know what’s going on. I know this: Lobos is a quirky, engaging criminal. He’s deranged and I love him. He’s in prison but he doesn’t want to be. That about sums it up. Oh, and FBI bigwig Mike Sandoval, who is Angie’s boss, is in cahoots with the drug lord which is no bueno.

Angie visits Agent Greg Knox, whose interests include being her former boyfriend, current stalker and Jamie hater. It goes like this:

Angie: Hi.
Greg: Hi.
Angie: I’m mad because you found Carlos “Vibora” Ruiz. Lobos is already locked up. Why did you do that?
Greg: Well, I am an agent so… Okay, I did it because he can prove your chocolatey goodness is really Ghost. May I pet your magnificent chestnut tresses now?
Angie: No.
Greg: Fine. I’ll just make sure that Ruiz shows up at the FBI office. That way your boyfriend’s lawyer will see him and tell him that you don’t have Ghost’s back.
Angie: Gulp.
Ghost’s Lawyer: Hey Ghost, I just popped in to the nightclub to tell you that Ruiz was at the FBI office. Angie doesn’t have your back.
Ghost: Gulp.
Angie Hi honey. You need a lawyer.
Jamie: Is this because of Ruiz? Why didn’t you tell me about Ruiz? Blah, blah. Let’s upset the audience by squabbling.
The Audience: She just warned you. Shut up, Jamie.
Angie: Gotta go. I’m heading back to work to mess up this case because I love you.
Ruiz: Hi. You have pretty hair.
Angie: Thank you. Please disregard everything Agent Knox said about snitching on Ghost. He killed a whole bunch of people like Vladimir and Drifty last season and he let you live.
Ruiz: Okay.

The Feds: So, who is Ghost?
Ruiz: Yo no se.
Angie: Look at my smirk Greg.
Greg: Look at my eyes having hate sex with you.

At Truth, Dre, who is Ghost’s right-hand man, meets Tariq. It goes like this:

Tariq: Hi. I am Jamie’s son.
Dre: Well, that will come in handy. Let me go home now and find Kanan in my apartment.
Kanan: Hi. Remember how I was you mentor?
Dre: Yes, and then I wanted a better life for myself and my sweet, little girl. Now I work at Ghost’s nightclub so I could go legit. I would like you to not kill my little girl.
Dre: You betrayed me when you went to work for Ghost. Guess I have to throw this sweet, little girl out of a window or something.
Sweet Little Girl: Gulp.
The Devil: Wow, Kanan, just wow.
Dre: I’m on your side again. Did I mention that Ghost’s son Tariq is a handy plot device?

After an ambush, Tommy fills in his girlfriend Holly. It goes like this:
Tommy: Hmm, I wonder who tried to kill me.
Holly: Well, since the drug lord Lobos told you to kill Ghost and you didn’t follow orders, I’d say it’s him. I could be next. Our dog would be alive were it not for Lobos.
The Audience: Uh, it’s not like you were all that attentive to Bell. We’d say her chance of survival was 50/50.
Tommy: It’s complicated.
Holly: Well, I’m so glad that I arranged for the Jamaicans to kill Ghost so we can get this over with.
Tommy: What?
Holly: Never mind.
Tommy: Oh, there is a knock at the door. Hi Mom, it’s been so long that I forgot you were a character.
Tommy’s Mom: I’m here to remind the audience that I’m a money-grubber with no parenting skills, which is why you turned out to be such an effed-up person.
Holly: Hi.
Tommy’s Mom: You are a whore. Tommy, she has red hair like me. Oedipus much? Let’s do some blow. Hey, let’s talk about old times. Ghost is the best. He’s your bestest friend.
Holly: Don’t mind me. I’m going to text the hitmen and tell them to kill Ghost.
Tommy’s Mom: Before I leave, let me reiterate how Ghost is like a son to me. Now, I will kiss you on the lips.
The Audience: Do you think she does that with Ghost too? Just asking.
Julio: Hi Tommy. It’s me, your right-hand man. It was the Koreans who tried to kill you, not Lobos
Tommy: Yay! I am most certainly not going to kill Ghost. We are going to hug it out.
Holly: Funny story, I arranged for the Jamaicans to kill Ghost. Let’s have a physical fight that may endanger the baby you don’t know about.
Tommy: I could kill you.
The Audience: Oh, sh-t. He meant that in a literal way. Bye, Holly.

Angie goes home to tell Ghost the good news about Ruiz. It goes like this:
Angie: Hi. Ruiz is no problem now. You’re safe. The Lobos case is over. Hmm, you are staring at me in stunned silence.
Ghost: That’s just the look of love. I have a gift for you: legal documents, I’m officially splitting up with Tasha.
Angie:  Yay, no more obstacles! Bye, Tasha.
Angie’s Hair: So, may I let myself loose now?
Jamie: Go to sleep, I have to sneak out in a hoodie and visit Tommy.
Jamie: Hi Tommy. Hi Holly. Uh, Holly? Holly?
Tommy: Gulp.
Jamie: Since we are best friends, I’ll take care of this and bury her. BTW, I helped save you from the Koreans, though for some reason I didn’t tell you that.
Tommy: So, funny story: Lobos ordered me to kill you, I didn’t do it but Holly called in the Jamaicans. I got so mad I killed her.
Jamie: LOL! Let’s kill Lobos together.
Tommy: Yay, friends again!

We enjoy witty comments from Power fans. They don’t appear right away, but we’ll get to them.