Warning: We are here for Jamie, Angela and Angie’s magnificent chestnut tresses. If you don’t think they were destined to be together and live on a rainbow and have unicorn babies, you will be grumpy. Proceed at your own risk. 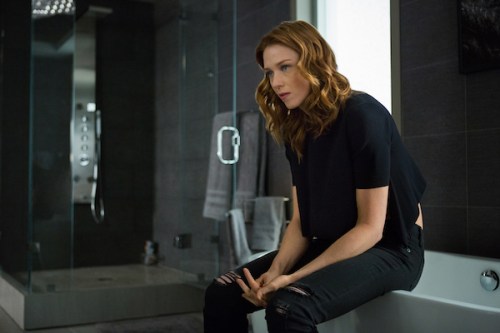 When Angela Valdes sauntered into James “Ghost” St. Patrick’s nightclub, the high school sweethearts picked up where they left off. Everything was perfect. Angie was part of an FBI task force investigating a mystery man called Ghost. Drug distributor Jamie goes by the street name Ghost. What could possibly go wrong? Oh, and Jamie is married to Tasha. And Tommy Egan–Ghost’s business partner, dragon and white soul brother–is loyal to Tasha and detests Angie and her magnificent chestnut tresses. Angie thought she finally figured out who Ghost is–Tommy. Once she learned the truth, she did what any federal agent would do: destroy evidence. Have you seen Jamie? It was worth it. In doing so, Angie messed things up for her stalkerish former boyfriend Agent Greg Knox, who hates Jamie. Things are so much different now, except that Jamie is still married and not telling Angie everything about his professional life, and Agent Knox is still following Angie around and determined to bring down Jamie. Let’s go!

Jamie is wearing sexy boxer briefs and his muscles. Welp, this has been a great episode. The end. Okay, okay, he is on a phone call  and it goes like this:

Jamie: Hi Tasha. How are you doing?

Tasha: Fine. I’m just standing around in skimpy lingerie and admiring my body in the mirror. I am so hot.

Tasha: I guess they are okay, they show up for plot now and again. I hate Angie. I hate her magnificent chestnut tresses. Keep her away from the kids. Bye.

The weekly obligatory explicit sex scene belongs to Tommy and Holly. It goes like this:

Tommy: Huff, puff, grunt. Huff, puff, grunt. Wow, my face is so red, I may be having a heart attack. Where is my Life Alert?  I’m probably just distracted because I’m thinking about how the drug lord Lobos has ordered me to kill Ghost. We used to be BFFs and I don’t like G. anymore, but I don’t want to kill him.

Holly: I’m probably thinking that I want to get this over with. The same way I wish you would get killing Ghost over with. That and I’m pregnant.

Okay, now that we have all the boobs and butts out of the way, we can move on. What’s that you say? There is more to come? Hopefully, it’s Jamie and Angie. Spoiler Alert: It’s not.

In D.C. the presumed-dead Kanan is recovering at the home of Jukebox aka The Corrupt Lady Cop. It goes like this:

Kanan: Ghost tried to kill me but I am a badass and somehow escaped a fire. My third-degree burns didn’t kill me so now I’m ready to do some crime.

Random Character: No, you’re not up the task.

Jukebox’s Girlfriend: Hi, my name is Candie. I’m going to see for myself if Kanan is up to the task.

Kanan: Hi Candie.Thank you for coming in here and taking off your top and starting a lot of rubbing and touching to see if I’m up to the task.

The Wardrobe Department: Yeah, we just kind of phoned it in this week, so all the characters only got half an outfit.

Kanan: Okay, I’m ready for crime. I will put on a scary mask and lead some other masked men into a jewelry store for a violent heist. There will be killing. This may be the most awesome crime scene of the series,

Jukebox: I’m The  Corrupt Lady Cop, so I’ll make sure you get away with it.

Kanan: Good. I will then return to your house and have sex with your girlfriend on the kitchen counter.

The Audience: That seems unsanitary. And warn us if you plan on whipping it out again.
Back in New York, Tasha finds Angie waiting in her lobby. It goes like this:

Angie: I feel sorry that your son Tariq found my gun and took it to school, so I used my connections to have his record expunged.

Angie: Ummm, well Ghost and I are in love so that makes perfect sense.

This is a good time to mention that Power is a gritty crime drama about the drug trade so let’s address that. It goes like this:

Holly and Tommy visit Tasha to talk business. It goes like this:

Tasha: Hi. Have a drink.

Holly: No, thank you.

Tasha: You refused a drink. It’s a rule that anytime a woman on TV declines a drink; she’s pregnant. You will probably make a horrible mom.

Holly’s Midriff: I’m not happy about this either. Since I am always on display, I have my own dressing room, right next to Angie’s magnificent chestnut tresses.

Tasha: Tell Tommy about the baby.

The Plot: No, this is TV so she has to say: “I have to tell you something,” then he will leave in a snit so that he can find out in another episode and get pissy.

Speaking of tension, Angie and Jamie are not sitting on a rainbow and making unicorn babies like they are supposed to. Instead, they are getting snippy with each other. It goes like this:

Angie: You paid my rent, I can pay my own rent. Rent, rent, rent.

Angie’s Hair: When you two fight, I can’t bounce and behave because Angie will put me in a bun or something, so knock it off.

Agent Greg Knox: You are upset now, Angie but just wait until you get to the office and find out that I’m no longer suspended for stalking you because I have relevant info regarding the plot and this will be bad for Jamie. Maybe when he goes to prison, you will love me as much as you love that chocolatey goodness.

The drug plot makes bad things happen. It goes like this:

Korean Mobsters: We are going to kill Tommy because of drugs or something.

Ghost: Thank goodness, I have this news. Now, I can save Tommy’s life. The Koreans will shoot him, but then I’ll shoot at them, and Tommy will live, but he won’t know I was the one to save him because it’s Let’s Not Give Tommy Important Information Day.

Tommy: Hi Holly, I’m home and bleeding all over the place.

Holly: Okay, I assume none of this would be happening if Ghost wasn’t alive, so I’m going to say I’m out getting bandages, but in reality, I’m going to visit the Jamaicans and tell them to just kill Ghost and get this over with.

Power airs on Saturdays at 9/8c on Starz.

We love reading the witty observations from Power fans. Comments don’t appear right away, but we promise we’ll get to them.

Power Recap: “I Got This on Lock”

When Angela Valdes strolled into James “Ghost” St. Patrick’s nightclub, feelings reignited for the high school sweethearts. Their only obstacle...