Power Recap: “I Got This on Lock”

Warning: We are here for Jamie, Angela and Angie’s perfect hair. Our love is passionate. If you don’t think sweet dreams are made of this pairing, then you will get mad. If you think Angie’s a homewrecker and Jamie is a big old Cheaty McCheaterson, you will be a sorehead. Proceed at your own risk. 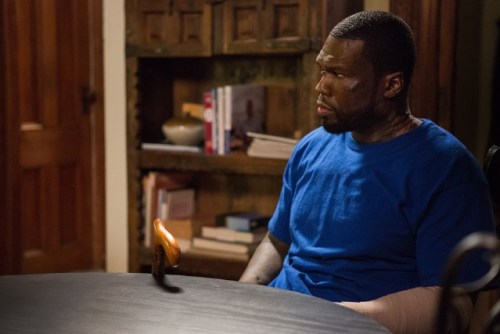 When Angela Valdes strolled into James “Ghost” St. Patrick’s nightclub, feelings reignited for the high school sweethearts. Their only obstacle was that Angie didn’t reveal that she was working on an FBI drug task force looking to nail someone named “Ghost” and Jamie never mentioned that he goes by the street name “Ghost.” The crazy kids hugged it out and Angie destroyed the evidence implicating Jamie. Now Jamie has gone legit [Editor’s Note: Hahahaha] and can devote himself to stroking Angie’s magnificent chestnut tresses. One hiccup: Tommy Egan–Ghost’s former business partner, dragon and white soul brother has beef with Ghost and has been ordered by drug kingpin Lobos to kill G. Let’s go!

So we open in D.C. with your standard convenience store robbery. Some lady cop arrives and kills one of the culprits but also the innocent store owner. Miss Lady Cop keeps it 100 when it comes to unnecessary police shootings; she just makes up a story about how the store owner got killed and goes on about her business. We will later discover that she is protecting one of the culprits, who is named Dirt. Dirt! And she wants him to go to college. Yes, Dirt, just go on to Oxford and conquer the world.

Miss Lady Cop returns home and–Wait, who dat in her house? Awwwwwww, yeah! Kanan is alive. It goes like this:

Kanan: My former protege, Ghost, “killed” me by setting fire to a warehouse in the Season 2 finale. I’m portrayed by 50 Cent, one of the show’s producers, so everybody knew I was alive no matter how improbable. It is quite lovely of you to allow me to recover from my third-degree burns in your home.

Jukebox: You were nice to me when my family rejected me for being a lesbian. So, what’s going on?

Back in New York, Angie, Jamie and Angie’s hair go for a run. It goes like this.

Angie’s Hair: I’m in a ponytail and pretending to be imperfect by exhibiting a few flyaway strands.

The Audience: You know you are perfect, so just stop it.

There is an explicit rough sex scene with one of the important secondary characters and it has something to do with the plot. It goes like this:

Rough Sex Scene: This does not involve Angie and Jamie so let’s pretend that it does. He’s pulling her magnificent chestnut tresses and there is a lot of spanking and “say my name” and yoga contortions going on. Just use your imagination, pervs.

When she’s not being salty with Ghost or standing around her kitchen slicing heirloom tomatoes, his estranged wife, Tasha is amazing. When it comes to finances, Tasha was the brains of the outfit and she knows how to move money around. Tasha is helping Ghost’s former BFF, Tommy, launder money through her friend Keisha’s salon. Keisha is now going to be the hair weave queen or something. It goes like this:

Angie’s Hair: Go ahead girls, buy that horse hair. You and your tracks still won’t look like as good as me.

FBI agent Greg Knox, Angie’s former boyfriend/doormat turned stalker is stalkerish and tattles to Angie that Jamie isn’t clean and is still entangled with Tommy and the drug biz. Look, Greg, you never get to touch Angie or her hair again, so stop trying to cause trouble. There is another issue, Jamie and Tasha’s son, Tariq, takes a gun to school. Tasha is quite understandably salty to learn that the weapon belongs to Angie. Jamie’s a bit vexed by this too. It goes like this:

Jamie: So my kid had easy access to your gun, what’s that about? Why do you even have a gun?

Angie: Ummm because I am in law enforcement. Look, until the first episode of the season, it wasn’t even clear that you have three kids. They are superfluous and the audience doesn’t give a toss about them so just shut it down. What’s this I hear about your involvement with Tommy?

Angie’s Hair: Sigh. This is so annoying that I’m going to put myself up into a bun until you are ready for sexy time.

The Plot: Yeah, this is supposed to cause tension in the relationship but even I don’t care. Wake me up for the hair-pulling.

Holly finds out she’s pregnant. It goes like this:

Tommy: Shhh. I’m playing video games to illustrate that I am too immature to be a good dad. I couldn’t even stop the dog from getting whacked by Lobos’ minion because I’m dragging my feet instead of killing Ghost. Gotta run! I just got a call from Tariq and I have to meet him. I may be mad at Ghost, but I still love Tasha and their three kids: Tariq, the daughter we don’t see much of and the baby who exists only to show that Angie is not ready for all of that. Oh, hi, Ghost. I see you tricked me into meeting you by pretending to be Tariq.

Ghost: Yes. I know you are working with Lobos because of the drug plot but I think he wants to kill me.

Ghost: So you’re going to help me, right? I know you don’t want me dead.

Ghost: You better help me because he’s going to get rid of you as soon as you screw up, which is inevitable.

Tommy: Rude. I don’t feel guilty about being ordered to kill you now.

Power airs on Saturdays at 9/8c on Starz.`

We love reading the witty observations from Power fans. Comments don’t appear right away, but we promise we’ll get to them.

The long national nightmare is over, Power is back, baby! For those just tuning in, Power is a show about...