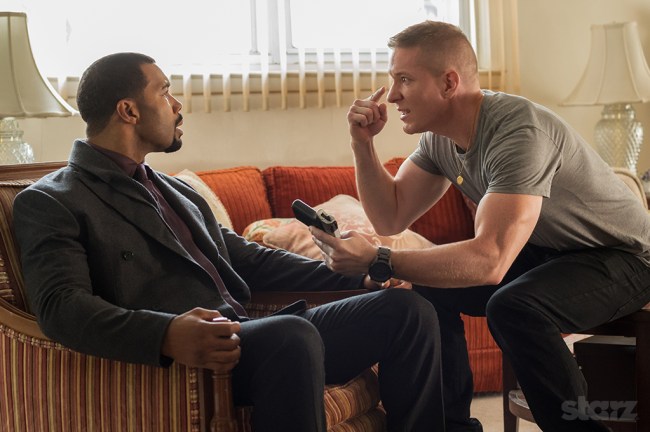 Tommy has some news for Jamie
Photography By Myles Aronowitz

Okay, Season Two of Power is back! The first season finale was crazy. If you need a recap of the Starz series, it’s: “Holy Shit!” Do you need more information? Did you miss the first season? That was a poor life choice. This show is great. Here’s your Who’s Who.

James “Ghost” St. Patrick owns the New York nightclub, Truth. It’s for the beautiful people. His hobbies include making you jealous that you don’t live in his lavish, yet tasteful, apartment. That’s not really the right word, think of it as a mansion in the sky. I’m fairly certain that the set designers add square footage weekly. He also supplements his income by distributing drugs. That apartment isn’t going to add weekly square footage by itself.

Tommy Egan is Ghost’s lifelong friend, partner, and dragon. If you’re a troublesome business competitor, Tommy will either kill you or make you wish you were dead. He’s creative. He’s also loyal to Jamie’s wife, Tasha. If Jamie were to, let’s say, have an affair, Tommy would give it some severe side-eye. He might try to save your marriage by killing the other woman. That’s because Tommy believes is in love. He fell for Truth cocktail waitress, Holly. Fortunately, this isn’t the kind of show where a declaration of love might spell doom.

Tasha St. Patrick is Jamie’s high-maintenance wife. She is given to lounging on the bed in lingerie to get her husband’s attention. When that doesn’t work, she puts on sex shows for their limo driver, Shawn. (His talents include not swerving off the road, pining for Tasha and having enough sense not to run afoul of his “Uncle” G.) Tasha’s a good mom. If you break her daughter’s heart by not casting her as the lead in the school production of “Annie,” well, that would be a poor life choice, so don’t do that.

Angela Valdes is Jamie’s high school sweetheart. She just happened to walk into Truth and away with his heart. She’s a federal prosecutor and part of a task force assigned to bring down a drug ring. Her hobbies include not realizing that her lover is a major drug distributor. She’s looking forward to Jamie opening a new club in Miami. They are going to run off together and nothing could possibly go wrong.

The Foreshadowing Fairy gives a lot of side-eye to “happily ever after” scenarios.

Okay, that’s all you need to know for now. Let’s go!

The Foreshadowing Fairy is besties with a sexy, mysterious assassin who favors flashy footwear. We don’t know her real name, but she’s referred to as “Pink Sneakers.” She dropped by Truth. It went like this:

Holly: Hey Jamie, Tommy just told me all about your drug business. It’s cool, Tommy said he loves me, we’re going to live happily ever after.

Pink Sneakers: Bang, bang! Whoops, I was aiming at Ghost, but I shot Holly, who is probably going to die. Welp, gotta go.

Tommy wasn’t around because he was busy killing Angela’s confidential informant, Nomar Arcielo. He didn’t know that Nomar was working with the feds. He knew that Nomar was a pedophile. No loss, except for Angela’s case and career hopes. It goes like this:

Angie’s Boss: So, you’re kind of a screw-up. What were you doing when Nomar was being killed?

Angie: Having some hot sex with Jamie. He’s married, but it’s not like he’s not a drug distributor or anything. Besides, Nomar told me that some guy named Ghost is crucial to the case. Wonder who that could be?

In any case, Angela gets demoted to the White Collar division. 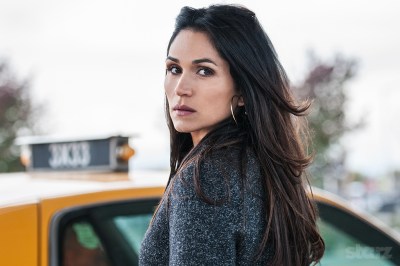 Things aren’t going much better for Jamie. This club shooting has led to an investigation, Truth is going to be shut down for a while. It could take anywhere from a month to a year. Tommy has gone missing. It’s a Very Bad No Good Rotten Day.

It’s worse than he knows. Jamie and Tommy’s former boss Kanan is out of prison. He’s been in the joint for ten years. He’s bitter because he has no square footage. He wants to take over Jamie’s territory. It turns out that Shawn, the chauffeur is Kanan’s son. He picks his dad up from prison. The ride goes like this:

Shawn: Uh-oh. I just got word that there was a shooting at Uncle G’s club.

Kanan: I’m trying not to cackle with glee.

Kanan: No, I’m having a Very Bad No Good Rotten Day. Take me to see a girl, I’ve been behind bars for ten years.

The girl in question is Pink Sneakers, who is nowhere to be found. This displeases Kanan who goes around beating up random characters in order to find her. He should beat up the person who told him that it’s still okay to wear red leather jackets. All that’s missing is the sparkly glove. Well, he has been in prison for ten years. Not sure that his outfit would have been au courant in 2005, but let’s move on.

The one person having a Very Good Day is Simon Stern. He sneakily maneuvered to become Jamie’s landlord, which means that he can control Truth — and Jamie. He’s just gleeful about it and suggests a name change, Coquette. Now, that’s just cruel. I love Simon.

Jamie tells Tasha what’s going on with the club. They talk business and she goes into Lady Macbeth mode. He may have to start a turf war, but she’ll help with everything, as long as Jamie does one thing, ditch Angela. He isn’t that good at secret affairs and hasn’t figured out not to leave his phone lying around. I love Tasha.

Jamie says he’ll handle it. He handles it with his penis. Oh, Jamie. Angie chatters about their new life in Miami. The Foreshadowing Fairy says, “Girl, please.” Jamie uses the old, “Sure, we’ll be together, but it will take a while,” excuse. Well, at least Angela has her career to maybe salvage. She does some sleuthing while Jamie tracks down Tommy, whom he finds at his mother’s house. Tommy is in a Very Bad No Good Rotten Mood. It goes like this:

Jamie: Where have you been?

Tommy: Oh, nothing. Just hiding out because I know how you are working with the feds to set me up.

Tommy: Your girlfriend is a federal prosecutor. The thing that really makes me mad is that when I went to kill her I figured out that you two were leaving town together.

Tommy: Let’s focus. You are sleeping with the enemy.

Jamie: Yikes! I better go deal with this. By the way, Holly may be dying in a hospital. You should have returned my call.

The Audience: For you maybe, but this is an amazing episode!

Jamie goes to see Angela. You can tell she’s just ready to pack the bikinis and sunscreen and go to the Sunshine State. The look on Jamie’s face suggests that she is about to have a Very Bad Rotten No Good Day.

Okay, Power fans get ready for the sex — and lots of it —, drugs backstabbing and intrigue, Season Two...