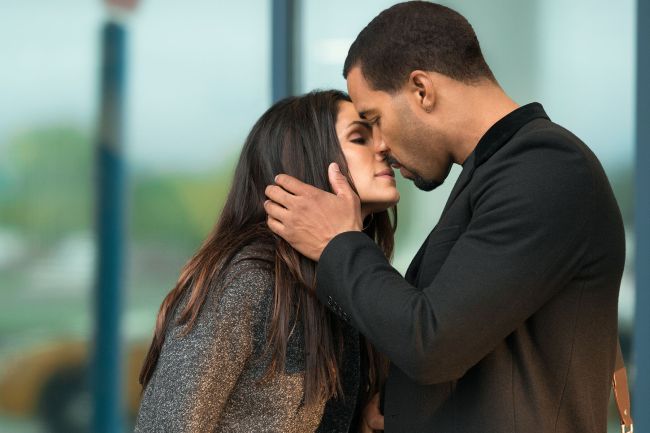 High school sweethearts Jamie St. Patrick and Angela Valdes reunited when she strolled into his nightclub, Truth. Ironically, neither of them can tell each other the whole truth about their lives. Jamie neglected to mention that he’s leading a double life as a drug distributor, who goes by the name “Ghost.” Angie didn’t tell him that she’s part of a federal task force investigating the Lobos drug cartel. Well, she was on the task force until she screwed up the case, so she was demoted to the white-collar crime division. But Angie’s still secretly working the case. Sometimes she needs help from her ex-boyfriend and current co-worker, Greg Knox. He always says no and threatens to report her, then he does whatever she wants. It’s complicated. Unbeknownst to Angie, Jamie found out that she’s a fed. He did what he had to do to survive — whisk Angie off to Eden Roc Miami Beach, a luxury resort, and spa. Jamie can leave the drug trade in the capable hands of his best friend, partner and dragon, Tommy Egan. Tommy knows better than to reveal too much about their operation. Yes, there was the time he spilled the beans to his shifty girlfriend, Holly. But he learned his lesson. He certainly would be more prudent with Ghost and Tommy’s mentor, Kanan, who was recently released from prison. That would be wise because Kanan might resent the fact that his protegees are so rich that Ghost lives in a mansion in the sky. Thank goodness Tommy is discrete.

It’s a snowy, gray day in New York and Jamie’s wife, Tasha, is in that big bed all by herself. Aww, I feel bad for her, then I remember this is Tasha and the feeling passes.

Jamie:  Remember the time Simon Stern swindled me out of control of my nightclub, Truth?

Jamie: I’m here to help him swindle other club owners by offering deal-with-the-devil acquisition contracts. I’ll only regain control of Truth if I do whatever Simon Sez.

Angie: Ha, ha! That Simon is such a scamp.

Back in New York, we find out a few important details.

Tommy is a Kanan fanboy. He takes Kanan to the wash-and-fold, where Ghost launders money. Apparently, Kanan used a car wash as a front. Tommy says that Ghost gets all his ideas from Kanan. Tommy also blabs to Kanan that in addition to helping Simon swindle, his partner is searching Little Havana to “cancel Christmas” on Pink Sneakers. I think we all need to start using the phrase “cancel Christmas.” Maybe one day we’ll get a flashback addressing Tommy’s yuletide issues. Long story short, Tommy talks too much and then they go kill some extras. It’s drug-related. Let’s focus on Jangela.

Sure enough Ghost spots Pink Sneakers. It’s his first day in Little Havana, so you’ve got to admire the efficiency.  Ghost sees the assassin as he takes a photo of Angela. Jamie promised his wife that he’d end the affair, I don’t know what he thinks he’s going to do with a camera phone shot of his lover, upload it to Instagram? Where is your stealth, Jamie? He must have left it home because Jamie makes a theatrical surveillance face as he watches Pink Sneakers. Angie doesn’t pick up on it because she is blinded by the sizzle. Understandable.

Pink Sneakers has a name, it’s Mariela. She’s working at her abuelo’s bodega. Her life seems rather mundane for a sexy assassin. She takes out the trash and wears tie-dye jeggings. I guess being a gun-for-hire isn’t that lucrative. Hopefully, she has a good dental plan and flexible hours.

During some beach porn, Angie and Jamie talk about the future. It’s sweet but delusional. They’ll live together and she’ll get a job transfer and the kids will visit in the summer, which is crazy because no sane New Yorker spends the summer in scorching Florida. No sane New Yorker spends the summer in New York either. You go to the Hamptons if you’re rich. Otherwise, you visit the Jersey Shore. Or, if you are thrifty like Mr. and Mrs. TV Recaps you lower the car windows and wait to get splashed by rotating water sprinklers. The sensible solution would be to have the kids stay with Jamie during the school year when it’s cold in New York. Jamie says he has looked into schools, so I guess that means they will go to summer school in Florida? Wow, Jamie. He also thinks that he can easily get rid of his wife, saying, he’ll “make Tasha “a very rich woman and she’ll be okay.” I dunno about that. I think she would hold on out of spite. If I were her, I’d move on as long as he keeps paying for his mansion in the sky. BTW, the set designers continued to add square footage this week. I’m fairly certain that Chez St. Patrick is bigger than Eden Roc Miami Beach, a luxury resort, and spa.

The wishful thinking is interrupted by Greg Knox’s persistent calls to Angie. Jamie is aware of it because Greg Knox’s name is as prominently displayed as the Eden Roc Miami Beach, a luxury resort, and spa signage. When Angie finally picks up it goes like this:

Greg: You stole my password to access my case files on Ghost. I’m going to report you. You can’t do whatever you want.

The Audience: Yes, Angie can do whatever she wants and that includes look insanely gorgeous in form-fitting dresses and high heels as she walks around Florida. Also, why are Jangela the only people in Miami in cocktail attire while everyone else wears shorts or bikinis or unfortunate pink jeggings? It doesn’t matter, they are sizzling all over the place.

Jamie: Why is this guy calling you, are you still a couple?

Angie: No, that’s silly. Nobody would root for Grangela. That sounds like a bacterial infection, whereas Jangela sounds like sizzling perfection.

Back at the mansion in the sky, there’s some kind of flirt triangle with Tasha, Shawn, and Lakeisha. Tasha tries to win by adjusting her top to display her cleavage. Shawn has already seen her one-woman sex shows, so that makes cleavage less effective. Shawn leaves with Lakeisha to drive her home. It seems Lakeisha is envious of Tasha, making Lakeisha more of a frenemy. Tasha is left to pout and create rich-lady snow.

In Miami, Jamie fails to get a club owner to agree to be swindled by Simon. At Eden Roc Miami Beach, a luxury resort, and spa, Angela points out that no sane man would sign Stern’s contract, Angie will help Jamie swindle by looking up court records on the club manager. It works, blah, blah, blah, yay! Celebratory Jangela sex!

Afterward, there is pillow talk. It goes like this:

Angela: I love you. So, did I ever mention that I’m a fed working on a task force and I may have to send Tommy to prison? Your business ventures with Tommy could result in blowback if he’s doing anything illegal.

Jamie: What? Illegal? That’s crazy talk. I am so mad right now. However, you are perfect and beautiful and sizzle all over the place. I love you, too.

As they order food, Jamie sees Pink Sneakers ordering food. She is now wearing metallic sneakers, by the way, but let’s continue to refer to her as Pink Sneakers. Jamie makes dramatic surveillance face behind a menu. Oh, Jamie. Angela doesn’t notice because her observational skills are limited to how sizzling Jamie is. It’s understandable. The assassin formerly known as Pink Sneakers sees Jamie and flees. It goes like this:

Jamie: Order for me while I abruptly dash off to chase Pink Sneakers. Too bad chatterbox Tommy told Kanan where she is because now Kanan’s man has found her first and stabbed her. As she lays dying, I will ask her who put the hit on me, but she will refuse to tell me. Then, I will return to you dripping with perspiration.

Angie: What took you so long? I drained my mojito.

Good news! Jamie and Angela finally make that trip to Miami. Bad news! Angela is still a fed and Ghost...