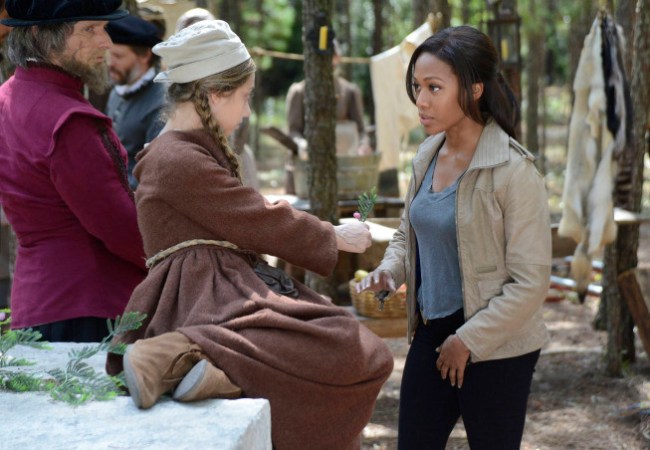 This is the requisite creepy-child episode. Every supernatural series needs one. In this case, a boy from the past runs after a pretty little girl from the present and ends up in modern-day Sleepy Hollow. You could make a case for the symbolism of it all. Go ahead, make the case, I don’t feel like doing it. Let’s go!

So back to the kid, after he follows the adorable little girl (Summer Parker), The Horseman of Pestilence aka Conquest comes charging at him. I know he’s evil and all, but Conquest looks real Alpha in that Samurai ensemble.

Abbie moves Ichabod into the late Sheriff Corbin’s Trout Lake cabin. The damn sexy hobo is relieved to no longer be at the motel. The irony is we never see Abbie’s apartment again in Season one or Season two. Also, Crane is now a damn sexy squatter. Moving along, Team Witness has gone shopping and she bought him one of those nylon sponges, a razor and what looks like detergent. This info will come in handy when your smartass friends say that Ichabod doesn’t groom.

Ichabod examines his face in a hand mirror.

Ichabod: Miss Mills Do you think I look out of place in this century?
Abbie: You look good for 200. But a change of clothes wouldn’t hurt.

The banter comes to an end when the lieutenant gets a call about the mysterious boy and the Witnesses go to investigate. The creepy kid has some sort of disease. It goes like this:

Abbie: Yeah, but let’s focus on the diseased mysterious kid.

Ichabod: Oooh, I can show off. I know Middle English.

Morales: Rather than impress Abbie with my investigative skills, I’m going to complain to Captain Irving because I am not shipping Ichabbie. I’m shipping Mabbie. Or maybe Labbie.

Irving. First of all, that damn sexy hobo is helping out around here so just mind your business. Secondly, you come up with stupid shipper names. Beat it.

Morales: Fine, I’m going to get a call from some lady at the history department of Oxford’s Merton College and she will claim that Ichabod is on staff.

The Continuity Fairy: Don’t get all excited about putting the pieces together, this puzzling tidbit will never be addressed again.

Team Witness go to the Westchester Memorial. After speaking to the quarantined kid via a monitor, Crane gets to exposit about the Lost Colony of Roanoke. I guess they all left North Carolina and settled in the Hudson Valley area of Westchester County or something. It doesn’t make much sense, it doesn’t have to. The bottom line is that the Outbreak monkey has infected Sleepy Hollow and now a bunch of extras have to wear Hazmat suits. Ichabod and Abbie go poking about in the woods at Rockefeller Preserve from which Thomas emerged. 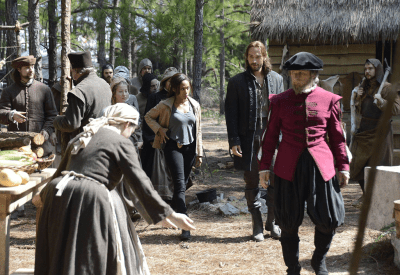 They figure out the mystical path to transport them to Roanoke. All of the inhabitants are covered in the same black veins as Thomas. The only way to save the boy’s’ life is to return him to the colony. If the plague continues to spread, the Horseman of Pestilence will arrive in Sleepy Hollow and reunite with Headless, the Horseman of Death. As they are leaving the colony, another creepy child holds out a flower to Abbie. Nope. Lieutenant Mills does not accept gifts from eerie little girls. Sorry, extra.

Back at the hospital, Ichabod discovers his black veins on his hands. He’s dragged into quarantine. After the doctors inject Ichabod with something, he enters a dream state and sees Katrina. She whispers that the place she is trapped in is Purgatory, Moloch’s the one who holds her there. Ichabod regains consciousness before Katrina can say more. 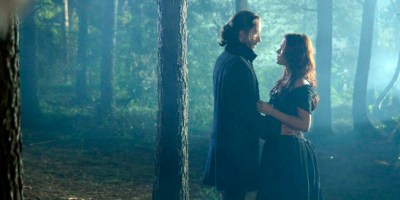 Skeptical Abbie finds herself in the hospital’s non-denominational chapels and questions Go aloud. She demands to know if she will be able to save the boy, what about the others, what about Ichabod? Just as she’s giving God side-eye, she gets a sign, the holy water. Abbie convinces Captain Irving that those with the plague can be healed by spring water from the colony. The Captain goes along with the wacky plan to get Ichabod and Thomas past the Hazmat suits. They make it to Roanoke and take a dip in the well. Abbie’s plan works, which stops the Horseman of Pestilence from making it to Sleepy Hollow. Crane is healed and Thomas is … dead. The entire colony was dead but trapped in a purgatory between good and evil.  Thomas was only lured into the present day in order to spread the plague. Ichabod praises Abbie for saving the day, saying: “You stopped it by having faith. Your faith in being one of the Witnesses allowed you to see what your eyes could not.” Somehow everyone in the hospital recovers, so the whole ordeal is over.

Cliffhanger: Welp, they beat Pestilence, so that takes care of the Horseman of Death for a while, right? Nope. Guess who rises out of the river and hops on his red-eyed horse?

It will be established that Ichabod Crane is the unsung hero of American history having figured into all the key...