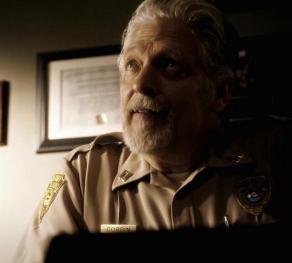 Backstory: After busting young Abbie for breaking into a pharmacy, he took her to a diner and gave her five minutes (as long as it takes apple pie à la mode to melt) to decide if she wanted to straighten out her life.

Recent Developments: He was decapitated by the Headless Horseman at Fox Creek Stables…. The sheriff privately believed that as teens, the Mills sisters encountered a demon in the woods. A 19th-century farmer had the same experience and linked the trees to the Four Horsemen of the Apocalypse…. Corbin secretly kept track of occult happenings and mysterious cases along the East Coast. One of George Washington’s battle maps was among his files. Unbeknownst to Abbie, the sheriff also had a close connection with Jenny, who helped him look into supernatural happenings…. The Mills sisters and Crane often turn to Corbin’s occult files and recordings to help battle demons. During one such investigation, they learned that when Jenny was once possessed by a soul-hopping entity, Corbin managed to exorcize the demon…. The late sheriff’s envious son, Joe, showed up in town with a chip on shoulder and a grudge against Abbie. Joe has since made peace with his past.

Likes: Throwing her weight around, shooting Dislikes: Catching Ichabod hanging around the sheriff’s department, the rash of violent crimes plaguing...