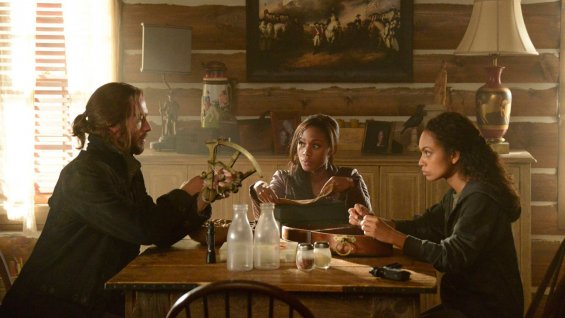 It will be established that Ichabod Crane is the unsung hero of American history who figured into all the significant Revolutionary War events. The damn sexy hobo had a key role in the Boston Tea Party. Really, the man’s face should be on currency.

Just to make sure we are “completely in love” with Ichabod, we’re treated to this bit of swoon-worthy dialogue about his wife, Katrina: “Surviving death, separated by time tests the bonds of love. But the moment I saw her, I knew the bravest love is born again with each new day. The kind of love that makes the mundane a marvel that bewilders with its magnificence. Until fate’s cruel hand intervened. And in the blink of an eye, Katrina was lost to me.” You know who also loves Ichabod? Yolanda. She is moved to tears by his romantic musings. Yolanda is the NorthStar rep. who gives Crane voice directions on how to unlock the vehicle and figure out the entertainment system. He also waxes poetically about his Jenny, who has escaped from Tarrytown Psychiatric. Captain Irving quite irrationally blames Ichabod who spoke to Jenny for a few minutes. Okay, he does want Jenny on Team Witness but he didn’t slip a file into a cake or anything. In any case, Ichabod praises the BAMF goddess, saying, “My opinion, though admittedly not a professional one, is that Miss Jennifer Mills is a brilliant misunderstood woman, haunted by a past she’s struggling to understand. Yet her past is precisely what makes her valuable to us.” 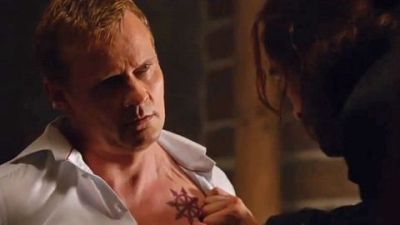 Bless her heart, but Jenny has no stealth at all when it comes to being on the lam. She walks into a honky-tonk in a black hoodie and conspicuous sunglasses. It’s after dark, Jenny. The barkeeper Wendel Clark has been holding her weapons cache, money, and all your Sarah Connor needs. The baddies of the week are the Hessians. They show up at the bar and question Wendel about Jenny because they believe she has “item 37.” Things don’t go well for Wendel.

Abbie and Ichabod visit one of Jenny’s past foster homes for info on where she might hide. It goes like this:

Luanne Harley: I am a horrible human being, I’m slothful, mean-spirited and wear a muumuu. I just got in the foster parent business so I can profit off needy children. Let me talk smack about Jenny right now.

Abbie: I may be petite, doe-eyed and soft-spoken, but I swear to you that I am a pint-sized destroyer of worlds, you better cooperate or I will “I will rain legal brimstone down on you so hard it will make God jealous.”
Luanne: Oh, okay, here’s some useful information, I have cooperated and have to go back to mistreating the extra in the other room without repercussions now.

Ichabod: Damn, girl! I am shipping us so hard right now. Let me give you a sidelong glance.

The Witnesses go to a cabin at Trout Lake.

To get into the cabin, Abbie picks a lock.

Ichabod: What are you doing?

Ichabod: How fortuitous. An officer of the law with a criminal past.

Ichabod: Imagine the delinquency we could perpetuate if we really put our minds to it?

The cabin, it turns out, belonged to Abbie’s mentor, Sheriff August Corbin. Interesting that she’s never been there. More interesting, there are photos of a smiling Jenny and Corbin. Jenny enters, Abbie pulls her gun and Jenny does the same. It’s a Mexican standoff. Squabbling ensues. Ichabod serves up some severe side-eye and then shouts at the sisters. Honestly, his words are correct, but it’s ballsy to get loud with a couple of armed women. Be that as it may, the sisters heed Ichabod’s stern words. Jenny tells of her special relationship with the sheriff, they worked together on occult matters and he sent her around the world to find rare artifacts. Corbin had a bad feeling and the night before he died, the sheriff asked Jenny to find a special thingamabob and keep it safe should anything happen to him. Obviously, Abbie is somewhat miffed to hear that Corbin kept her in the dark. Jenny seems annoyed that it’s Abbie who gets to be one of the two prophesied witnesses.

The team finds a sextant and of course Ichabod is familiar with the a mysterious item. Under General Washington’s orders, he helped stage the Boston Tea to get his hands on an article with similar markings. That’s right the Boston Tea Party was all Ichabod’s idea but was thwarted by a Hessian guard who gave his life to protect the item. The conversation is interrupted by Gunther, the lead Hessian. Long story short, the Hessians are looking for a map which will lead them to a spell book so they can raise demons. The Hessians intend to After a lot of boasting about how clever the Hessians are, Gunther kills himself. Fare thee well Gunther; if Sleepy Hollow kept villains around long enough to form a Rogues Gallery, you would have been a favorite. Obviously, Team Witness is not going to let a bunch of undesirable demons run amok so they find the book, which Abbie tosses into a fire. The Hessians went to a lot of fuss for centuries and it only took Abbie a couple of hours to defeat them.

With the threat over, it’s time for Jenny to return to the psychiatric hospital, but first she and Abbie have a heart-to-heart. Abbie offers an apology for turning her back on Jenny all those years ago, she plans to help get Jenny released from the hospital early.

Cliffhanger: Big news! The Hessian’s last words were “Moloch shall rise.” Ichabod’s done some research and figures out that Moloch is the name of the horned beast that Mills sisters encountered in the woods when they were girls and the same creature who controls the Horseman and guards Katrina in the netherworld.

I knew it, I just knew it! Lieutenant Grace Abigail Mills has an apartment! If nothing else, she has a...