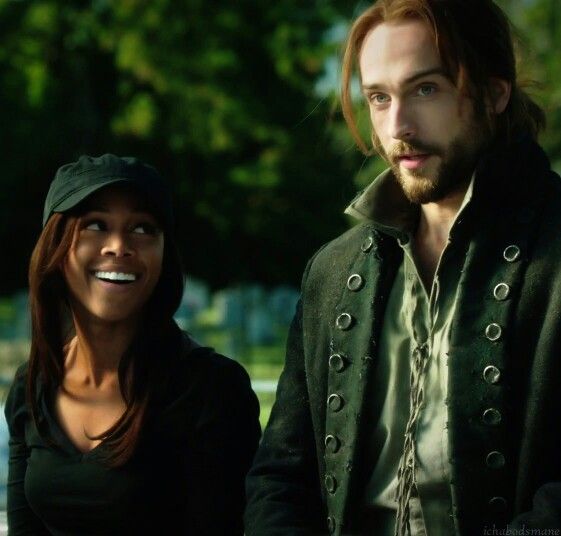 Lieutenant Abbie Mills and Ichabod Crane take some time off from Witnessing and she takes Crane to his first baseball game. It turns out the usually soft-spoken Abbie has some solid heckling abilities.

Abbie: Safe! What?! Are you kidding me, dude?! Way to police the game. Yeah, that’s right. Blue, I’m a cop. I’m deputizing you.

Ichabod: It’s baffling. I’d consider myself a sporting man, but why must you insult that gentleman for citing a rule infraction?

Ichabod: Open your eyes, sir! Yes, you. Basket face. I thought only horses slept standing up!

After that enjoyable baseball outing, Ichabod visits Katrina’s headstone and ends up getting shot in the neck with a dart. Abbie is is driving when she falls into a trance. In her vision, Abbie is chased by the Headless Horseman. The sequence contains elements that will show up in subsequent episodes. It’s worth the rewatch. Spoilers ahead.

Katrina: Hi, I’m Mrs. Crane, Ichabod’s in trouble. He was kidnapped and will probably get killed.

Abbie: What? That can’t be. We just  saw each other.

Katrina: When I cast that spell to save Ichabod’s life, I didn’t realize it would create a blood tie to the Horseman of Death. The only way to save Ichabod is to consult a Sin Eater, who will break the curse.

Abbie: Okay. So, why did you put me in some kind of trance while I was driving? Somebody could get killed that way. You could have just popped up in a mirror or something.

It turns out the Freemasons are the ones who captured Ichabod. They take him to a mystical Masonic underground location. It goes like this:

Rutledge: Generally speaking, we’re the good guys but you share a blood link with the Horseman of Death so you have to die. Seriously though, we really like you. Katrina? Not so much because she hid you even though she knew about your link with Headless. But back to the point, you’ve got to die.

Ichabod: Okay, I’m going to make the heroic sacrifice and drink some poison, but first let me get something off my chest, it’s a sin. Back when I was a redcoat, I interrogated a man named Arthur Bernard, a freed slave and really cool guy. Anyway, he was was accused of treason because he was believed to be “Cicero,” who published a pamphlet supporting the rebellion against the Brits. I was ordered to kill him, but I changed my mind at the last minute. He told me all about demons and said to talk to Katrina, the hot Quaker nurse whom I’d just met, for answers. My asshole commander came along, shot Bernard in the back, turned into a demon, attacked me and ran off. If only I hadn’t waited so long, Benard wouldn’t have been gunned down like that. That is my sin. What are you going to do? It’s not like you can just eat sin, you know what I mean? 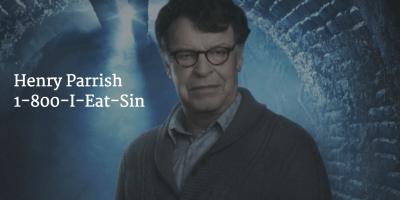 Abbie gets Captain Irving to approve a day pass for her sister Jenny, who is still residing at Tarrytown Psychiatric so the Mills Sisters can save Ichabod. You know, if Jenny is allowed to leave the facility for the day, Abbie should really just let her sister out to do something that Jenny wants to do once in a while, like a spa day. In any case, Jenny knows how to find a swallower of sin and they visit Henry Parrish, who reluctantly agrees to help. They figure out that Ichabod is being held in a mystical Masonic bunker.

Abbie finds Ichabod with the Masons, and he asks for a moment alone with her. He insists that he must die to avert the Apocalypse, but she won’t hear of it. Cue the significant shipper-fuel facial expressions. It goes like this:

Ichabod: “Abbie, this is the only way.”

Abbie: “That’s the first time you ever called me Abbie.”

Shippers: He actually called you by your first name in the Pilot, but okay.

Ichabod: “I’ve lived on borrowed time more than any man deserves. I’ve seen wonders beyond my wildest imaginings. And through these centuries, against the impossibility that we would find each other, we did. And I am most grateful for it.”

Just a couple of buddies

After Ichabod ingests the not-so-fast-acting poison, Henry arrives and says Crane doesn’t have to die. Sin-eating ensues. Bernard —who is a dreamboat—shows up and tells Ichabod that the Horseman feeds on his regret and everything is A-okay, he’s not mad. Incantation time, everything is cool.

Ichabod and the Horseman are no longer linked, Ichabod may continue his role as a damn, sexy hobo. The Witnesses embrace for their first “just-a-friend” hug. I’m pretty sure he’s thinking about how good her hair smells.

Cliffhanger: Tiny glitch, since the whole scheme hinged on Ichabod dying to kill the Horseman of Death and avert the Apocalypse. Headless is still around and he’s back in town.

This is the requisite creepy-child episode. Every supernatural series needs one. In this case, a boy from the past chases...