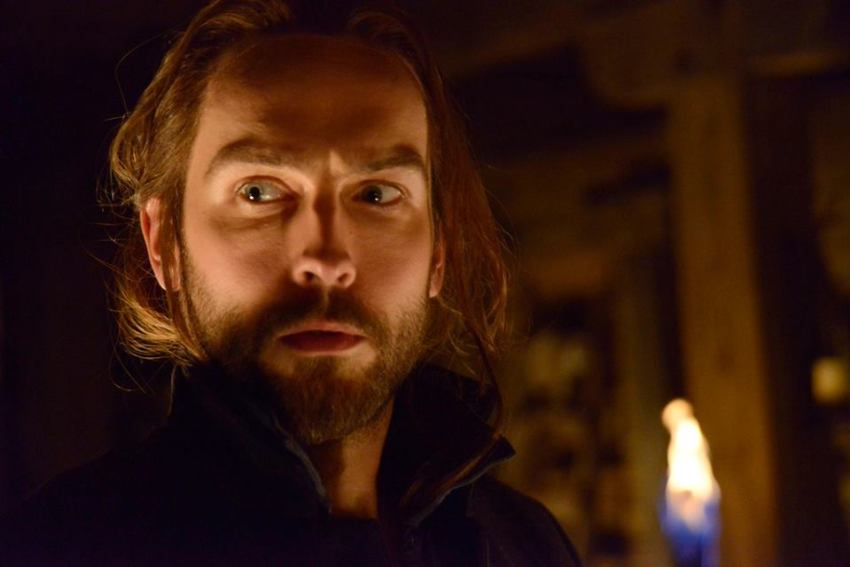 Theme: When everybody is griping about Season Two bring in another tall brooding guy with a foreign accent.

We pick up moments after the Apocalypse has been averted. Ichabod, Abbie, Jenny and Katrina are all unscathed. There’s no sign of Moloch or Henry, that’s just fine by me. Both Witnesses make some questionable choices.

Quotable Ichabbie: During a trip to the farmer’s market, Ichabod grumbles about new food trends.

Abbie: Reinvention isn’t such a bad thing. Have you ever had a Grapple?
Ichabod: I have had to engage in hand-to-hand combat on many occasions.
Abbie: Not that kind of grapple, it’s a mashup. It’s a grape plus an apple.
Ichabod: My point exactly, a union that hardly seems necessary.

Status Update: Six weeks after Moloch’s defeat, Ichabod and Abbie get to engage in pleasant activities like a trip to the farmer’s market. Lieutenant Mills seems to be over the whole Witness game, but Crane is obsessed with the idea that there’s still evil afoot. I guess it’s easier than focusing on the fact that he and Katrina are on the outs. (High-five, Ichabbie fans!) It turns out Ichabod is now making his bed in a corner of the archives because the witch has taken over the cabin. I’m sorry, but what in the name of fuckery is that?! Corbin’s cabin does not belong to Katrina. Or Ichabod. Or even Abbie. If anyone has a right to squat there, it’s Joe Corbin. In other words, Katrina doesn’t just take over storyline, she takes over sets. By the way, do we even know where Abbie lives these days? 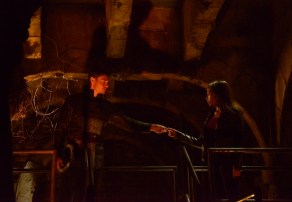 Heaven Must Be Missing a New Character: Ichabod is bothered by a rotten apple so Team Witness heads to the farm that grew the fruit. They come upon some horny devils in hoodies. The demons scatter when a hot winged guy in black swoops in. He says that he was held captive in Purgatory until six weeks earlier and now he’s looking for the evil creatures who were let loose when Moloch entered the world. If everyone gets a hall pass from Purgatory does that mean we’ll see John Cho soon? Abbie readily accepts that Orion is an angel. Seems to me that Season One Abbie would have been more skeptical, but, okay, Show. The angel reports that with Moloch’s early retirement, Headless has been promoted to the new Big Bad. Good for Headless, it’s nice to see hard work rewarded. Orion tells Abbie that he can kill the Horseman of Death because he’s got a big tool. He also gives her a special doohickey so that she can always reach him.

Witch, Please: Katrina thinks she’s Christian Grey all of a sudden so she spends her days at the hexed cell with a chained up Abraham. She’s looking for a way to separate him from the Horseman or some such shit. Katrina tells Ichabod about her plan, which Ichabod instantly rejects. Wait, what? He’s willing to hear her out? Why is the show trying to make fans annoyed with the hero? As a furious Abbie tries to talk some sense into Ichabod, Orion tells Katrina that he’s going to use his big tool on Headless, swearing that the Horseman will “taste the edge of my blade.” That’s right, he’ll introduce the Horseman to some sizzling homoeroticism. Katrina lets the Horseman escape.

Loony Tunes: Ichabod puts too much faith in Katrina; Abbie puts too much faith in Orion. After she uses the doohickey to summon him, Abbie gets a call from Ichabod who has done some research. Orion has a tendency to show up right before catastrophes. Does he prevent the events or bring them about? Abbie lets Crane know that she and the angel are going to the carriage house. Turns out Orion is a nutter. He rants to Abbie about how he is not just destroying evil, he’s rebuilding the world as a paradise. Orion says his weapon (Again with the penis symbolism?) will kill Headless and then he’ll absorb the Horseman’s power to cleanse the world. When he starts yammering about Sodom and Gomorrah, Abbie figures he’s a zealot. Orion also intends to kill Katrina. Let’s not be too hasty to condemn this guy. After Crazy Pants stalks off, Team Witness gets together and conclude that Orion is worse than the Horseman of Death…. Chaos erupts. The horny devils launch an attack on Team Witness and Orion and Headless grapple. Instead of swiftly killing Headless with his magical blade, Orion does that Batman ’66 thing and stops to prematurely crow about his victory. This gives Ichabod time to sneak up, remove the blade from the Horseman’s back and smash it. Headless sexily struts (Don’t judge me) toward Orion. The Horseman kicks the angel, who immediately turns tail and flies off. Without his weapon, Orion is all talk…. Katrina tries to get back in her husband’s good graces…. Ichabod apologizes to Abbie for taking Katrina’s side and Abbie apologizes to Ichabod for taking Orion’s side. The Foreshadowing Fairy shows up as Abbie looks at her doohickey.

Cliffhanger: Someone shuffles into a convenience store. That someone is barefoot, bedraggled and guzzles milk straight from the carton. That someone is Captain Irving and he does not want to hear about your “No Shirt, No Shoes, No Service” policy.

So, what did you think of this episode? Is Sleepy Hollow redeeming itself?

11 Ways Sleepy Hollow’s Ichabod Is Better than The Bachelor

The new season of an absurd TV show airs tonight. It's about some rando fame whore who juggles emotionally damaged...