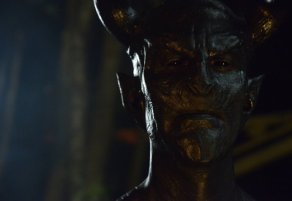 Backstory: The demon first appeared as a blurry creature to teenaged Abbie and Jenny in the woods.

Murder and Mayhem: Moloch killed disfigured and reanimated Officer Andy Brooks, controlled a sleeper cell of Hessians and held Katrina captive in Purgatory…. Moloch posed a riddle to Ichabod: “The Saint’s name is a sign. When you know my meaning, War will take form. Then the End of Days begins!” He also vowed that he’d have Abbie’s soul, and Ichabod would be the one to deliver it. Jenny decoded the puzzling message at a church formerly known as  St. Henry’s Parish. It was revealed that Moloch raised the Horseman of War aka Henry Parrish… Moloch intended to use Katrina as part of his Apocalyptic plan. An attempt to have Katrina bring him into the world via a mystical pregnancy was thwarted, but he still ended up entering this realm as a baby, who rapidly grew up. 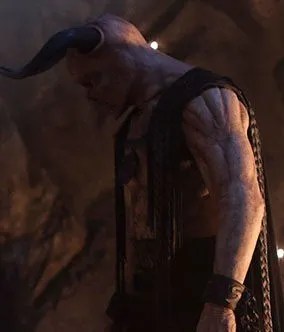 Well, that Backfired: After all his plotting, Moloch rose and began the End of Days. He bossed Henry around and wasn’t the least bit appreciative. Henry tired of his boss and killed him with the Sword of Methuselah.

Special Abilities: Snapping necks backward “like a Pez dispenser,” communicating through mirrors, which then crack.