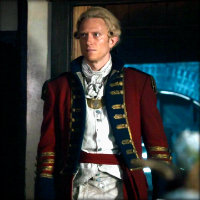 Backstory: In 1774, Ichabod’s wealthy best friend, who was betrothed to Katrina. He sought Ichabod’s advice on a gift for Katrina and Crane advised him to go with a tasteful emerald (or was it blue?) pendant instead of an ostentatious necklace. Katrina quickly deduced that the elegant gift was picked out by Ichabod. She confided to Ichabod that she was going to call off the arranged marriage because her heart belonged to him. The next day, Crane and Van Brunt went on a dangerous, clandestine and important mission to deliver the “Declaration of Resolves” to the First Continental Congress. As they walked through enemy territory, Abraham was distracted over the split and Ichabod admitted that Katrina had told him of her plans to break the engagement, and that they wished for Van Brunt’s blessing on their relationship. Abraham forced a duel, but was shot in the back by a Hessian. With more Hessians approaching, Ichabod went to help Abraham who demanded that Crane leave. Ichabod escaped.

Recent Developments: It was revealed that Moloch came to a mortally wounded Abraham, who sold his soul. His head was shaved, his hand branded and Abraham became an undead Hessian, the Horseman. In exchange for his soul, Abraham wanted Katrina. 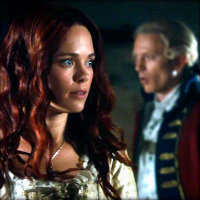 Unchain My Heart: Using UV lights in lieu of sunlight and a hexed Masonic cell designed by Thomas Jefferson, Ichabod and Abbie briefly captured the Horseman. The prisoner used undead necromancer Andy Brooks to communicate with Ichabod and disclose that Katrina was being held in Purgatory so that her soul will belong to him. The Horseman attempted to kill Ichabod, but was prevented from doing so by Moloch…. Henry was in league with Van Brunt and once Katrina exited Purgatory, she was taken captive by Abraham. She acted as if she wanted to stay with her ex, but only so that she can spy on him. They seemed to be getting along better than expected and he’s been infuriated by some of Henry’s schemes to harm Katrina, who escaped and ended up back in Ichabod’s arms for a brief time. She returned to Abraham, supposedly to dig for more information,  but soon she was back with her husband. After Abbie and Ichabod once more trapped Abraham in the hexed cell, Katrina freed him. He hasn’t been seen since.