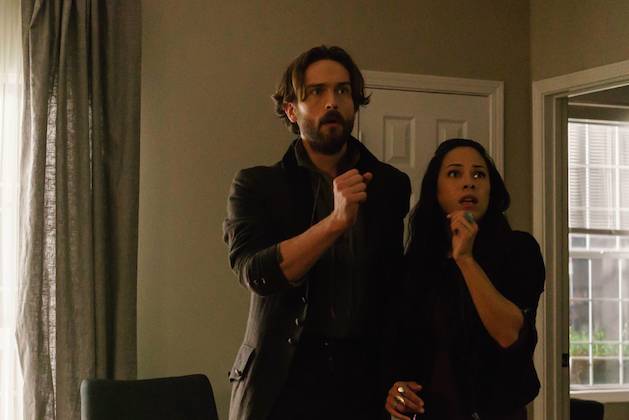 Awwwww, yeah! Sleepy Hollow is back. Abigail Grace Mills has gone jumping into another dimension again. This time. it was in some sort of tree portal to save her sister Jenny. Last year, she went back to 1781 to save Ichabod Crane. The year before that, she was in Purgatory to save Ichabod’s first wife, Katrina. We love you, Abbie, but knock it off. This is entirely too stressful for Sleepyheads. Let’s go!

Can’t wait to see Abbie. Where you at, Abs? Oh,  Betsy Ross and her lady pillows are in the opening. Hmph. Something, something flashback. Present day. Action scene. Black truck/motorcycle chase. Motorcycle crashes into the water. The bad guys give up and go away and—waaaaaaaait for it— the motorcyclist emerges from behind a tree, it’s Crane! That damn sexy hobo got his motorcycle license? When? What else does he know how to do now? Can he ride a Hoverboard? Whatever, he has a thingamajig that he apparently stole from “Apocalyptic cultists.” Maybe it’s the Weaver clan? Remember them? The point is, he needs the Lydian Jug for a locator spell. Jenny and Joe want to find Abbie, but they are less manic about it. She’s been gone for over a month, but they are not giving up. They are looking for a map that will help them locate Pandora and The Hidden One, which will lead them to Abbie.

Can we all agree that totally unhinged Crane is hot? You have to wonder if he was like this after he shivved that redheaded chick he was involved with that time.

Less hot? Being mean to Pandora. She and her husband, the chocolatey but evil god, are holed up in a charming mill. It goes like this:

The Hidden One: Remember how you breezed into town, sang to yourself, wore cute outfits and unleashed havoc so that you could raise me up or whatever?

The Hidden One: I totally don’t appreciate it. Blah, blah, humanity is awful, I don’t have my full powers, you are inadequate.

Pandora: Fine. I’m just going to see if I can make #PandoraDeservesBetter trend. I wonder if Agent Daniel Reynolds if is available? I want to get my swirl on with someone who is nice to me. In the meantime, here is some glowing mystical thing, which will probably cause trouble for Abbie.

So now Agent Foster has her eye on Ichabod. Agent Reynolds suspects Crane had a hand in Abbie’s disappearance. Reynolds refers to her as Agent Mills. Guess he still hasn’t made her resignation official. Agent Daniel Reynold’s case board includes an Ichabod glamour shot. I wish it was this one

Poor Ichabod still squatting at Casa de Love nest. How is it that he suddenly knows how to ride a motorcycle yet hasn’t figured out not to put frozen dinner in a skillet? Does he not see the microwave? Presumably, Abbie enrolled in an automatic billing system because the gas and electric is still on. We are 14 minute and 13 seconds into this episode and have yet to see Abbie. No bueno. Crane hears something upstairs and goes to investigate, Abbie’s sheer cami that we saw in the laundry basket one tme is on the staircase. Crane is perving like nobody’s business. You know he is just imagining. Anyway, he runs upstairs and the window is open. Are we to believe that Abbie’s lingerie just flew out of her bedroom and down the stairs? Is this her way of communicating? If so, that implies something. Or is Crane a big old Pervy McPerveson of Pervtown, USA? I know it’s time to  move on from this scene, but I’m just kind of lost in my head canon.

When the perv does enter, Abbie’s boudoir, the words “Help Me Crane” begin appearing on a mirror. Something reaches out and grabs Crane, leaving a mark on his arm. What the hell is he doing now? Looks like he took the mirror off the wall to do something weird with it. Not pervy weird, but it looks like he fell asleep with it under his head. He’s standing up, though. To quote Ichabod: “only horses sleepy standing up.” Sophie calls, it goes like this:

Sophie: Hi. Did you break into my apartment and vandalize it?

Sophie: FBI procedure dictates that I call you to chat rather than just hauling you into the station.

Ichabod: I’ll just come over to your apartment. Hmmm, the words “Help me Crane” are carved into your floor. Let me check your arm. I don’t know you, and you can roll up your own sleeve but I’m touching your arm. Our marks are mirror images.

An apparition appears, Crane has a vision of Abbie. Yeah, these messages aren’t from Agent Doe Eyes, are they? Crane thinks otherwise, he tells Sophie: “It was Abbie. She’s dying.” Crane needs Sophie’s help. It goes like this:

Ichabod: Let’s go to the archives and the Masonic cell.

The Audience: Why is this chick at all the Ichabbie spots? Slow your roll, Miss New Lady.

Sophie: Don’t worry. He keeps talking about Abbie, I get that he is only dragging me around to help find is wife, Mrs. Grace Abigail Mills-Crane.

Incantation time. Crane and Agent Foster hold their marked arms together and he is able to enter a mirror. Unfortunately, he emerges not with Abbie, but with some skittering, screeching ghoul girl. Sophie shoots at the creature. Yep, she’s totally related to Abbie.

For the first time in the history of TVRD, we don’t have any Ichabbie quotes to feature, so we have to go with what we’ve got. Ichabod pretends to talk to Abbie.

Ichabod: You don’t think I’m to blame, do you?

What Ichabod thinks Abbie would say: What I think’s not important, Crane. What do you think?

Ichabod: Who asked you, anyway

Aww, Ichabod gazes at Abbie’s glamour shot when he pretends they are talking to each other.

It turns out that the creature is an Onryo, a Japanese vengeance demon and has started killing people. Crane and Sophie investigate and we learn something about her. Sophie is not a total skeptic, her parents were archaeologists who disappeared at the Mayan ruins. Locals attributed it to demonic forces. She always wanted to find out about this other world. We also learn that the demon feeds on desperation. Knowing that Crane is desperate to find his, totally platonic partner, the creature pretended to be Abbie. Why did it go after Sophie? They assume the demon figured she is Crane’s partner. Sophie has an idea. What if the demon wants to go after people who are desperate to find Abbie? Reynolds could be next. He’s at a cabin near West Point. (We later find out that Sophie got him out of there with a bogus report of a Mills sighting.) Crane takes on the creepy creature, whose weakness is glass. With Sophie’s help, the ghoul is trapped behind glass. Crane gives Sophie a crowbar which she uses to kill the Onryo and welcomes her to this other world.

You know who also is desperate to find Abbie? Jenny and Joe. I don’t know why they were not immediately warned, but they are fine. Unlike Crane, Jenny has been trying to act strong, but Joe sees through it and is comforting. As they look for mystical thingamajigs, they have to deal with Randall—the man they left handcuffed in a motel shower. Love him! In the name of world-building, Sleepy Hollow needs more tertiary characters and shifty, avaricious Randall is a fun foil for Jenny. After a confrontation, Jennie is shaken because she thought Randall’s goons killed Joe; She tells Joe that she doesn’t do relationships blah, blah. Then she slips up and mentions the “L word.” Kissing ensues and presumably, sexy time follows. It’s discreetly implied. Later on, Joenny find Sophie with Crane in the archives. Jenny delivers some severe side-eye.

Another flashback: Nathan Hale was a partner to Ichabod and Betsy. He was executed. Sometimes partners die and Betsy told Crane not to count on miracles. Ichabod says he’s not giving up, but maybe he is a little bit.

Cliffhanger: Jenny and Joe have found something on the Blavatsky map. Monsters have been summoned to Sleepy Hollow. Obviously, Pandora is behind it.  Somewhere in a creepy cave, Abbie awakens!

Hmm, why does Sophie also have this mark on her arm? Abbie barely knows her. Ichabod seems to be taking...