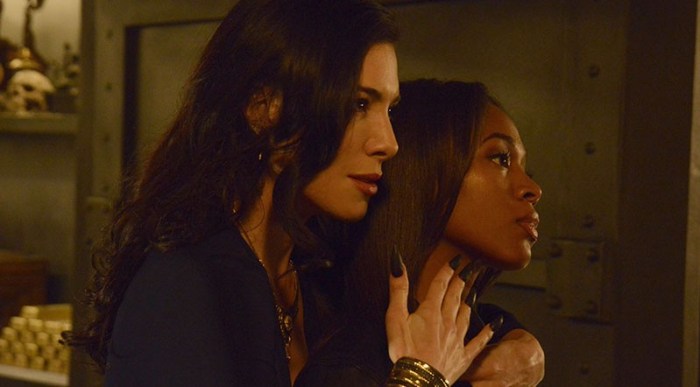 Theme: To recapture Season One glory, just let Ichabbie be Ichabbie. Is that so difficult? Also, Hawley’s got mama drama. And you should buy a Ford Mustang because the show needs sponsors.

This was one of the season’s more satisfying episodes because Team Witness reunited and worked things out. The eerie “Kali Yuga” was directed by Doug Aarniokoski who helmed several episodes including “Go Where I Send Thee…” Thanks for haunting my dreams, Doug.

In the opening scene, Ichabod, Jenny and Hawley are sitting around a bar cheering on Abbie’s karaoke routine (Nice pipes, Nicole Beharie!) Jenny probes Ichabod about his lack of time working with her sister. You think the writers are addressing mass fan discontent?

Quotable Ichabbie: Ichabod’s plan to free himself and Abbie from a vault goes horribly wrong.

Ichabod: I’ll admit, I was excited, I may have acted rashly.

Abbie: I’ll make sure to put that on your tombstone.

Mommy Issues: Hawley is displeased to see a sultry temptress. (It’s Jaime Murray, who was brilliant as the unhinged Lila on Dexter.) That’s no way to greet the woman who raised you. What in the name of Oedipus complex is going on? Carmilla, a treasure huntress, is in town to rob the Theodore Knox estate (a descendant of Henry Knox, of course) and she wants Nicky’s help. He declines but has second thoughts after Carmilla flashes teeth that rival The Four who Speak as One.

Alarming Behavior: An alarm indicates there’s a break-in at the archives. (Abbie never mentioned the newly installed silent alarm because it’s Season Two and Team Witness doesn’t communicate anymore.)  Crane and the Mills sisters investigate. As he runs off, Hawley warns Jenny to stay away. Ichabod, Abbie and Jenny give chase in the tunnels. Carmilla who has morphed into some monstrous form is there. Tom Mison does some cute twitchy finger acting as Ichabod discerns the creature is Vetala, an undead being that serves Kali, goddess of death and regeneration. Alone with Abbie, Jenny still won’t let go of the fact that her sister and Crane haven’t spent  much time together. Jenny is shipper.

Touched by an Angel: While conducting research with Katrina, Ichabod finds the halo charm that Orion gave Abbie and looks vexed…. Ms. Pines is still guilting Hawley about leaving, but he argues that he saw her commit murder. Carmlla garners sympathy by displaying a mark on her back. Some death cult turned her into a Vetala. She claims that an artifact at the Knox estate can make her human again so it’s a good thing Hawley swiped those blueprints. It turns out that Theodore Knox is a boor who holds black market exchanges. If he has a Ford Mustang, Carmilla should carjack it.

Commerical Break: OMG, you guys, it’s a Ford Mustang! The Exposition Fairy hitches a ride in Hawley’s car as Jenny explains that his parents died in an accident when he was 12, Carmilla is his godmother. Ichabod, Abbie and Jenny attend Knox’s exchange party. Jenny insists on helping Hawley, who locks her in a closet. That’s gotta sting, Sarah Connor.

Statue of Liberty: Abbie finds Carmilla holding the Kali figurine and starts shooting. I love Abbie, but she shoots at everything and it almost never works (okay, except for last week, when it totally worked). Abbie needs a new weapon. Text Buffy Summers. Ms. Pines goes all pointy teeth and grabs Abbie. Crane arrives with a crossbow an demands that Carmilla “Unhand her. Now!” It doesn’t work. Carmilla threatens to kill Abbie. Hawley shows up and tries to cool things down, but Ichabod is not about to stop being dreamy and threatens, “Harm her and you will seal your fate.” Hawley promises to stay with Carmilla if she doesn’t hurt his friends. He suggests locking Crane and Lt. Mills in a vault, saying he’ll tell Knox where to find them. Thanks for the help, Hawley.

Fight Night: As the Witnesses are trapped in the vault, the Unresolved Sexual Tension Fairy flies by, but Ichabod swats it because he has gripes with his Leftenant: Abbie went after Carmilla without him and the plan was to stick together, they haven’t been communicating and he didn’t know about Orion’s “sigil”. Abbie admits that she should have mentioned the angel’s gift. Ichabod concedes that he shouldn’t have tried saving Abraham without her consent. The duo discuss their broken bond. Hey, bonds! The Exposition Fairy rolls up in a sweet Ford Mustang so that Ichabod can yammer about bonds and how to exit the vault. His plan fails miserably and the walls start closing in on them, but they eventually escape.

The Shirt off His Back:  Carmilla drugs Hawley and engages in some not-so-motherly caressing. Thanks to Kali, they’ll always be together. What does that even mean? A bound Hawley is shirtless. Gotta concentrate here, okay. Carmilla claims he’s going to love death. Not as much as that Ford Mustang, though. Team Witness figures out how to destroy Carmilla. Jenny frees Hawley and tosses him some iron and fire which will kill Ms. Pines. Carmilla reverts to her human form and flees. At the archives later, Hawley tells Jenny that he has to track down Carmilla. They kiss farewell… Ichabod and Abbie make up with some karaoke. “Proud Mary” ensues. 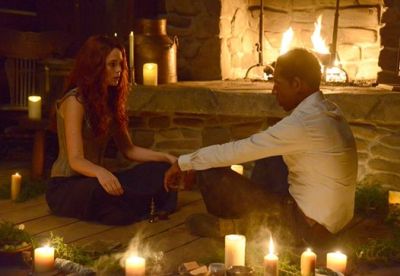 Out of Order: Court time! Frank Irving is exonerated on all charges. This makes no sense Show, but okay. Cynthia, who represented Irving in court, looks both pleased and freaked out. Cynthia has doubts about spooning with a man who was dead weeks ago. Aren’t the Irvings divorced? It seems that Cynthia was his ex in the first season. Maybe their marriage rose from the ashes like Frank.

Cliffhanger: Frank and Cynthia seek Katrina’s help. Frank wants to prove that he’s free of Henry’s influence. Katrina asks where her son is, but Frank says he doesn’t know what she’s talking about. Katrina’s expression is inscrutable as she gives Irving a drink. She claims that whatever bound him to the Horseman of War is gone. Irving and Cynthia embrace. Oh, he no longer has a reflection. Well, looky here, Katrina might be turning into a badass.

So tell us what you think of this episode? (Comments do not immediately appear.)

Okay, Sleepyheads, we've all had a lot to say about our show's creative direction and are sick with worry that Sleepy Hollow won't get renewed....