The Four Who Speak as One Bio 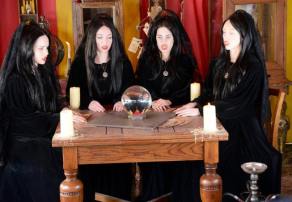 The Four Who Speak as One (Katrina Despain as Isa, Carrie Ann Hunt as Jer, Arin Logan as Nahum, Rya Myers as Mal)

Backstory: Members of Katrina’s coven who punished her for using a spell to save Ichabod’s life, thus altering the ordained path. They imprisoned Katrina in the netherworld.

Recent Developments: The witches are fortune tellers with a carnival. Seeking answers about his son, Jeremy, Ichabod confronted them at a carnival in Dobbs Ferry. They revealed that they had been waiting for Crane for centuries and that it was foretold that his arrival would seal their fate, they would die that night. He told them that unless they freed Katrina, the Golem would come for them. They explained that when Jeremy refused their help and would not give up his alliance with the Golem, they imprisoned the Golem in Purgatory, but Jeremy was immune to them because his power was too great. When Jeremy again refused their help and turned down an invitation to join their coven, the witches invoked a hex to stop his heart and buried him. Since death begets death, the witches’ awaited their demise. When the Golem escaped the netherworld and resumed his murder spree, the witches told Ichabod that only Jeremy’s bloodline could defeat the Golem, who ended up killing the witches.

Distinguishing Features: Stitches where his facial features should be, an animalistic howl