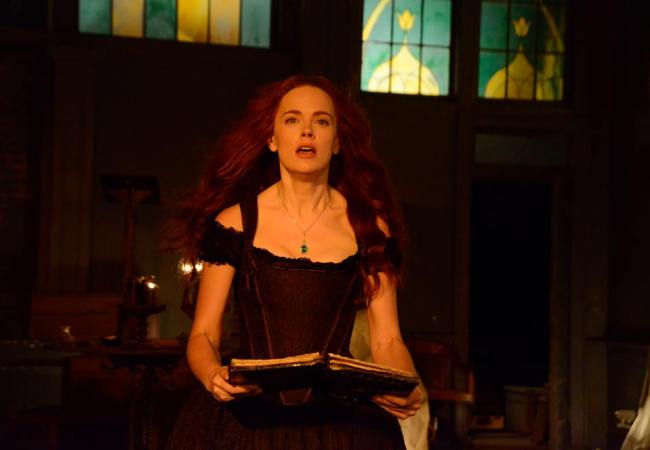 Theme: Let’s start at the beginning, a very good place to start.

May all your wishes come true. Katrina’s not moping about waiting to be rescued. All the players you want to see are in action: The Witnesses are working together, Frank and Jenny are back in play. What could possibly go wrong?

Ichabod says that the Witnesses must define their roles as they see fit.

Abbie: Like a Witness always tips the bartender. We never fight a land war in Asia.
Ichabod: And we must refrain from spoiling the ends of motion pictures. Thank you, “Rosebud.”
Abbie: Forgive and forget.

Hell’s Bells: Extras eyes are glazed white because this show’s special effects department cannot resist that trope. As it turns out, there’ a sister to the Liberty Bell in the town square. (Fun fact: There really is a sister to the Liberty Bell in Westchester County, where Sleepy Hollow is set. It’s at Saint Paul’s Curch in Mount Vernon, NY. Please tip your tour guide on the way out.)  Of course, Ichabod is the one who cracked the original. Probably by wildly jabbing his finger in the air one too many times. The timeline is off, but it doesn’t matter, Ichabod has some sort of exposition to explain it away. The ringing of the bell triggers a violent fugue state. To the archives we go! The bell is linked to witchcraft. Ichabod doesn’t want Katrina’s help, their relationship has turned frosty since Solomon Kent‘s visit. High-five Solomon Kent! Who needs magic when Ichabod and Abbie can shop at Target for all their explosive needs?

Mama Drama: Henry and Katrina are together, Parish explains to his mother that with the ringing of the bell, they can raise a coven and Katrina will be the high priestess. Katrina’s just another single mom out here trying to raise a son and focus on her career.

Frank Talk:  Jenny warns Team Witness that Frank is evil. They have their hands full so Jenny is on her own. She’s concerned because Irving demands to know where Cynthia and Macey are. She reminds him that he asked her to keep his family away from him, but he’s pushy. Shooting Frank doesn’t work. He’s got the jet black eyes now. The crew used up all their white contacts. Jenny makes a run for it. When Sarah Connor has to run from something, we’re all in trouble. It’s like when Olivia Pope has to run.  Jenny’s hair is on point though.

Divorce Court: As the Witnesses prepare to blow up the bell, Henry and Katrina arrive. Mrs. Crane is serving up some Purgatory realness. She’s back in her billowing black gown. Ichabod thinks Henry is holding Katrina against her will, but she haughtily lets him know that she and her son are a team. At least Katrina isn’t simpering any more, so there’s that. Ichabod gives her the finger, by that I mean, the flailing finger of warning her to tread carefully. Katrina’s like, “I’ve seen those dancing digits for centuries, I’m so over it.” She adds that she didn’t appreciate him putting their marital woes on blast. She’s still whispering, by the way. Speak up! Katrina hurls a blue ball of light at Ichabod and Abbie, temporarily trapping them in a tunnel so she can swan off with Henry.

Sounds Like a Plan: Ichabod has had enough. He pulls out his Samsung Galaxy to Tweet: “I am so over Katrina. #Ichabbie #RenewSleepyHollow.” The Witnesses devise a plan to distract Katrina and Henry. That plan is for Ichabod to strut through the empty streets shouting, “Come at me, bro! Come at me!” When Henry does come at him, Ichabod pulls his gun and Abbie comes screeching up in her vehicle, which shockingly is not a cherry-red Ford Mustang. Now both Witnesses have their guns trained on Henry. Too bad for them that he just watched The Matrix on Netflix and can repel bullets with his hand. While Ichabod tries out some trash talk, Abbie drives off, then comes back ready to run down Henry. Katrina shows up and launches a fireball. Ichabod cries out as the car is engulfed in flames. Psych! It was all a decoy, Abbie wasn’t in the car, she slipped off to take care of the bell.

Another Fine Mess: When Henry and Katrina discover what’s going on, Abbie and Ichabod end up tied to a stake. Pretty weak for a powerful witch and warlock, but okay, Show. While Katina is whispering about her plans for world-domination, Crane and Lieutenant Mills are having a pretty audible discussion about how to get out of this predicament. Ichabod saw Henry bleed and correctly deduces that Henry quit his job as Horseman of War, so now he can be killed. They discreetly free themselves and hatch a plan, Ichabod shoots at the bell. While Henry is distracted halting that bullet, Abbie guns him down. Katrina and Ichabod are at Henry’s side as he dies. Katrina takes a dim view of what just went down. She raises her voice long enough to say she should have let Ichabod die and this time she will. On the upside, Frank seems to no longer be evil and shares an embrace with Jenny.

Cliffhanger: Katrina is getting ready to disappear in a mystical cloud. While Ichabod is momentarily sidelined, Abbie lunges at Katrina and they both disappear. Crane yells out for his Leftenant. A perplexed Abbie finds herself in the woods, wanders into the road and is almost hit by a horse-drawn carriage. A string version of “Sympathy for the Devil” plays as she wanders into the road. A bird sits on a roadsign indicating that we are in Sleepy Hollow. Guess what? Katrina had performed a time-travel spell. She’s pregnant again and this time, she’s keeping her baby. Yeah, so back to Abbie, the year 1781 is giving her some severe side eye.