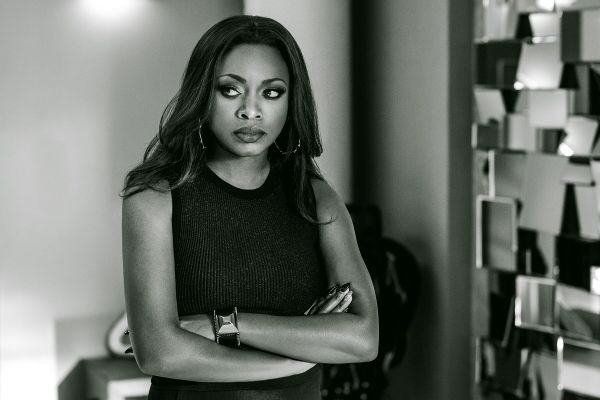 James “Ghost” St. Patrick reconnected with his high school sweetheart Angela Valdes. They make a fetching couple and nothing stands in the way of their “happily ever after.” Well, almost nothing. Jamie is a drug distributor and Angie, who is part of a federal drug task force, has been pursuing a shadowy figure known by the street name Ghost. While Jamie eventually found out what his lover does for a living, Angie was under the impression, that Jamie is simply a nightclub owner. The fed zeroed in on Ghost’s best friend, partner, and loose canon of a dragon Tommy Egan. As part of her investigation, Angie leaned on Tommy’s sketchy girlfriend Holly, who just told Agent Valdes that the man she’s been searching for is Jamie. In other words, Power is a screwball romantic comedy. Let’s go!

Did you know that Power is a gritty crime drama? Well, you wouldn’t know it from these recaps which pretty much gloss over anything that doesn’t involve Jangela. Other topics of focus:

In any case, there was a major plotline last week involving Serbians. It was dramatic and cinematic and I don’t really know what was going on, but here’s the upshot. Somebody is mad at somebody else and somebody called somebody a Gypsy, so some guy is punished by having his head covered with a sack and then somebody puts a rat in the sack and nightmarish things happen and somebody on the writing staff is a big fan of George Orwell’s 1984 because this is kind of like what happened with Winston Smith, and that’s all I have to say about that. Back to Jangela.

Having banished cheating Jamie to a hotel room in the sky, Tasha is struggling to adjust to life as a single mom. Tariq is acting up in school and her mom doesn’t help at all. It goes like this:

Tasha’s Mom: Hi, I’m Debbi Morgan and I played Pine Valley sweetheart Angie Hubbard on All My Children. I haven’t aged a day. Now, let me predict that Jamie will start a new family and forget all about you and the kids. Why are you fooling around with Shawn? Focus. Stand still while I slap you across the face. I provide both insult and injury. No wonder you are so salty.

Over dinner, Tommy has a warning for Ghost. It goes like this:

Tommy: I don’t care how hot she is, Angela and her chestnut hair are our enemies.

Jamie: While Tommy has stepped away, I will remind you that I already told you to leave town, why are you still here? Do what I say, or else.

The Foreshadowing Fairy: Holly’s probably going to get whacked.

Tommy: Later in this episode, I’m going to give Holly my grandmother’s ring as a promise ring.

Ghost gets in a fender bender and the cops suspect that it’s a DWI and take him to the station. Angie’s boss Mike Sandoval reports that Tommy’s associate has been brought in and she makes a point to go check things out herself. This does not escape the attention of Greg Knox, her ex-boyfriend, current coworker, part-time door mat and jealous lurker. Jamie summons his wife to the station, which is exceptionally nervy, but then he really doesn’t seem to have anyone else, other than Tommy, who needs to stay as far away from law enforcement as possible. In any case, Tasha spots Angie and is understandably salty. Angie keeps her distance and pouts from afar. After Ghost is released, there is a very uncomfortable ride home. It goes like this:

Tasha: That was obviously your girlfriend. Are you kidding me?

Jamie: I loved her in high school, I never stopped loving her, which is why I made googly eyes at her right in front of you just now.

The Audience: You are a rather incompetent cheater, Jamie. Please read Adultery for Dummies.

Jamie: By the way, she’s a fed. That’s why I took her to Eden Roc Miami Beach, a luxury resort, and spa. I was just keeping an eye on her. She thinks Tommy is Ghost, you know.

Tasha:  Wow, just wow. Okay, since she also made googly eyes at you right in front of me, I have a plan to save our business and family and to prevent us from going to jail. She is obviously in love with you and wants to protect you so, “Keep fucking her.”

Tasha: “You keep fucking that bitch until I tell you to stop.”

In the meantime, Holly takes Jamie’s bribe  money and heads to Penn Station. She gazes at the promise ring and ignores the Foreshadowing Fairy’s warning to run. When Angie can’t locate Holly she stomps over to Jamie’s hotel in the sky for answers and suggests that Tommy killed Holly. Jamie lies that Holly left town because she and Tommy split up. Off-camera Jangela sex presumably ensues.

Of course, Holly has not left town and she heads back to the loft, it goes like this:

Holly: Let’s get the handcuffs and do the bondage thing again, your turn.

Holly: Yeah, so I’m working with the feds to bring down Ghost.

Holly: I’m doing it for us, I am trying to keep you from going to prison.

Tommy: Despite the fact that this is all my fault because I have a big mouth, I’m going to rage at you like a murderous psycho now. Would you mind letting me out of these cuffs so I can hurt you.

The Foreshadowing Fairy: I’m not going to say it again.

We love your witty comments. They don’t appear right away, but we promise we’ll get to them!

Power Preview: “Why Her?”

The next episode of Power is intense. Yes, you can say that about every episode and I do say that...