Warning: We are here to bask in the romance of Jamie, Angela and Angie’s perfect hair. If you think Angie’s a homewrecker and Jamie is Cheaty McCheaterson, avert your eyes. We want them together always and forever. Proceed at your own risk. (If you don’t love Jamie and Angela, keep reading and drink our bitter tears.)

When Angela Valdes strolled into James “Ghost” St. Patrick’s nightclub, the high school sweethearts had a lot of catching up to do. Angie was on an FBI drug task force looking to nab a major drug distributor named “Ghost.” As it turns out, being a nightclub owner is Jamie’s day job. Well, technically, it’s his night job. In any case, his real job is being Ghost. It all worked out, so now Jamie can spend his days stroking Angie’s magnificent chestnut tresses. Jamie will never be involved with crime again, pinky-swear. Jamie also patched things up with Tommy Egan, his business, partner, dragon and white soul brother. Drug lord Lobos ordered Tommy to kill Ghost, but he didn’t do it so Holly, Tommy’s girlfriend, arranged a hit so she and Tommy could get on with their lives. When Tommy found out, he was a bit peeved and choked Holly to death. Ghost was there to bury the body because that’s how love works. Let’s go! 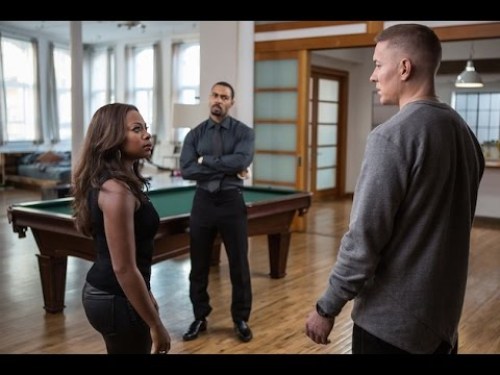 Tommy has had a long night of killing his girlfriend and covering it up. He’s an emotional wreck. It goes like this:
Jamie: Hi Boo, I got your back, Tommy. Oh, someone just showed up at the door. Hi soon-to-be-ex-wife Tasha.
Tasha: Hi. What are you doing here? Let’s go to the mansion in the sky that we shared with the kids before you started stroking your girlfriend’s magnificent chestnut tresses. BTW, where is Holly?
Tommy and Ghost: Gulp.
Tasha: Hey Ghost, while Tommy is out of earshot, I will keep asking about Holly and mention that she’s pregnant.
The Audience: Please don’t say that too loud, Tasha. Tommy’s suffered enough. Well, maybe choking the life out of his girlfriend isn’t suffering, but he did it because she arranged a hit on G. and Tommy loves Ghost way more than he loved Holly.
Ghost: Take care of Tommy. I gotta go have hot sex with my girlfriend.
Angie: Hi. It’s time to give the audience what they are here for. You rip off my clothes, I’ll straddle you and then I’ll be sprawled on the table. I’ll put my legs in the air, and then I’ll put them on your shoulders while you thrust and we adult content all over the place.
Jamie: Okey-doke. After this, I have to go do something shady.

Jamie has a pitch meeting with some lady who owns a hotel and he needs Tasha’s help. It goes like this:
Jamie: Tasha, we are at this lavish ivy-covered hotel for business or something.
Tasha: I hope it’s for “or something.”
Jamie: We have to pretend to be husband and wife.
The Audience: Uh, Jamie. You are still married to her. You know that, right?
Tasha: See? This is why I’m always salty.
Jamie: Just be my alibi, I’ve got some killing to do.

That Lobos is such a scamp, something or other is happening because of plot and he’s being moved from one prison to another. It goes like this:
Agent Greg Knox: Hello, I’m Agent Greg Knox. I specialize in being Angie’s ex-boyfriend and current stalker. I’m always in a bad mood because she loves Jamie, who I’m sure is Ghost.
Lobos: Angie may not be into you, but I am. This prison transport van is like a love nest on wheels. Maybe you should stop being straight now.
Greg: You’re right. Maybe we should hate f-ck. If only you had magnificent chestnut tresses.
Lobos: Darn it, we’re out of time. Tommy has arrived to help me escape. You are not going to like this part, Agent Knox. When this van crashes, you’re going to end up bleeding and probably dead. Bye!
Greg: Why can’t I ever catch a break?

Ghost and Tommy start carrying out their plan to kill Lobos, it goes like this:
The Audience: Don’t kill Lobos. He’s so funny and charming.
Ghost: Don’t get too attached.
Lobos: Tommy, if you do anything to me, your girlfriend Holly will be killed.
Tommy: LOL, I beat you to it.
Tommy and Ghost: Let’s squabble about how this should be done. Wait, whose phone is ringing? Lobos has a phone, uh-oh, maybe he’s being tracked.
Agent Mike Sandoval: It’s just me. I’m an FBI bigwig, but I’m also working for Lobos. I’ll just leave a message. To hear this in English, press one.
Lobos: I may be handcuffed but I will kick your asses.
Tommy: Maybe this is a bad idea. Let’s think about it before we do anything hasty.
Ghost: Bang, bang. Lobos is dead.
The Audience: Booo!
Ghost Now we have to go change clothes and be shirtless.
The Audience: Yay!!!!!!!!
Ghost: Life is good. It’s all blue skies, nothing but blue skies from now on.
Tommy: For you maybe. Enjoy your wealth, family and Angie. I have nothing.
Ghost: Oh, turn that frown upside down, you’ll find another girl.
Tommy: Actual quote – “Can’t replace Holly.”
The Audience: You should have thought of that before you killed her. Just wait until you find out about the baby, then you’ll really have something to cry about.

At the FBI headquarters, word spreads that Knox is gone. It goes like this:
Agent Cooper Saxe: It’s so sad that Greg is dead.
Angie: Uh-huh. I feel a little bad about walking all over him.
Cooper: He’s alive!
Angie: Oh.
Greg: Something fishy is going on. When Lobos’ accomplices showed up, they immediately got rid of his tracking device. Somebody inside of the department was working with Lobos.
Sandoval: I’m just going to clear my throat, shift uncomfortably and look at my shoes.
Angie: I’m marginally glad that you’re not dead, Greg.
Greg: Side-eye.
Cooper: So buddy, now that you think there is a mole in the department, are you going to stalk Angie again?
Greg: Yep.

At the luxury hotel, Tasha holds down the fort. It goes like this:
Tasha: Welp, while Ghost is off doing something criminal, my job is to stay at the hotel and provide an alibi by pretending he’s here. Good grief, Angie keeps texting Ghost and now I have to text back and tell her how much I love her and her magnificent chestnut tresses! See, Audience, this is why I’m always in a bad mood. Hey, what are these legal documents? Is Ghost planning on officially splitting up?
The Audience: Don’t act so surprised, you had to see this coming.
Jamie: Hi. How was your day?
Tasha: Good. Enjoying this luxurious suite and complimentary room service. I enjoyed the sandwiches. I did not enjoy texting with your hussy. BTW, I found these legal documents, I signed them because I’m tired of doing things like sending lovey-dovey texts to your girlfriend. I’m going to bed now.
Jamie: Yeah, it’s been a long day. Move over.
Tasha: Nope. Go sleep on the sofa.
Jamie: Why are you so salty? I spent the day killing Lobos to protect our family. Why do I have to sleep on the couch?
The Audience: Oh, Jamie.
With Lobos out of the way, Jamie goes back to work at the nightclub. It goes like this:
Jamie: It sure is nice being legit. No more foreign drug cartels to deal with. Oh, hello bodyguards, I thought I told you I don’t need protection anymore. Hey, nice accent, where you from?
Suspicious Looking Fellow: Hi, I’m Milan. I’m from Serbia and worse than Lobos. You stole from me and now you have to work for me to pay me back. I know everything about you. My security team is watching your club, your family and Angie.
Jamie: Gulp, I’ll tell Tommy.
Tommy: They’re going to kill Angela and it won’t be pretty. The only way to protect her from a fate worse than death is to kill her. I hate her but even I don’t want her to go through whatever the Serbians have in mind.
Jamie: Or I could just, you know, break up with her. Some people don’t kill their girlfriends, ahem. I’ll go talk to her now.
Angie: Honey, you’re home. Let’s talk about how happy we’ll be. That’s always a bellwether of trouble.
Jamie: We have to break up now.
Angie: I’m going to sob now.
Jamie: I’m going to leave. And then I’ll hear you sobbing and I’m going to sob.
The Audience: Nooooo, now we are sobbing.
Angie’s Hair: Goddamnit, I hate it when she’s sad. Now I’m going to be stuck in a permanent ponytail.

We enjoy witty comments from Power fans. They don’t appear right away, but we’ll get to them.

When Angela Valdes strolled into James "Ghost" St. Patrick's nightclub, the high school sweethearts had a lot of catching up...