Get Into It: The Wire

Introducing our new feature, Get Into It. It’s where some of our writers tell you about the shows you missed the first time around but that you should catch now. First up, and new to the blog, Ralph Spencer tells you about The Wire, which was released on Blu-ray this week. Take it away, Ralph!

So, you’ve got a lot of time to kill this summer. Your shows aren’t on and you need to binge watch something. Well, try what is obviously the best show ever made for television, The Wire. Anybody that tells you otherwise is still watching Saturday morning cartoons as a major form of entertainment. You haven’t seen it yet?  Good. Let me tell you why you should.

The show has the classic American elements: drugs, sex, greed, violence and, oh yeah, excellent characters and storylines. Its main characters are a group of Baltimore City homicide detectives whose experiences are prime examples of how shit rolls downhill. Each season focuses on a particular theme, the drug war on the inner city streets; the dying industry on the Baltimore docks; the good, the bad and corrupt city government; the crumbling public school system and the troubled stories of its students; and the deteriorating state of the newspaper industry as seen through the eyes of those trying to practice honest journalism at the Baltimore Sun. 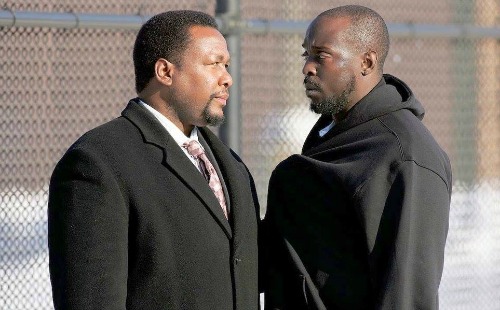 Created by David Simon, a former reporter for the Sun, the show ran from June of 2002 through March of 2008.Though the show got loads of accolades from critics it never received as much as a sneeze from the major awards shows. The folks on the Wire worked their behinds off bringing to life extremely human characters and poignant stories, and for all their efforts the awards shows treated them like red-headed stepchildren who stole the rent money. To me that says a lot about what the establishment thought about a show with a majority ethnic cast. Yeah, there’s your post-racial America.

While the storylines for the show are brilliant it’s the character portrayals that really make this the best show on television. I’ve listed some of the most memorable of the show’s characters.

McNulty – It’s all about McNulty – really. The show’s main character, Jimmy McNulty (Dominic West) thinks he’s always the smartest guy in the room, and the best detective in the department.  He’s kinda right about the detective part.  When he’s on the job it’s all about the case for McNulty; he’ll do whatever it takes to get the bad guy and put the case down. A lot of times, however, his efforts can have disastrous effects for either himself or for those around him. A lot of times it’s both. This fact is aptly displayed in the first season during his obsessive pursuit of drug kingpin Avon Barksdale. And the antics that he gets up to in the fifth and final season while chasing young drug lord Marlow Stanfield defy belief. McNulty is an interesting character to watch simply because of his penchant for near self-destruction. The only TV character who has more of a knack for getting his own ass in hot water than McNulty is Wile E. Coyote.

Bubbles – Bubbles (Andrea Royo) may be a heroin addict but he’s smarter, craftier, and has a  better work ethic than almost all the suits I’ve ever run across. He shows you just how hard junkies have to work to catch those daily highs. Oh yeah, by the way Bubbles also snitches for the police and knows all the players in the game. His story arc is the most interesting to watch through the series.

Stringer – Russell ‘Stringer’ Bell (Idris Elba) is comparable to Michael Corleone in The Godfather. He has aspirations far beyond the confines of ‘the game’ into the world of ‘legitimate’ business and he won’t let anything get in the way of those aspirations. This fact is chillingly illustrated during the second and third seasons by the way that Stringer deals with his partner Avon Barksdale’s nephew D’Angelo whom Stringer believes poses a problem for his business.

Omar – Omar Little (Michael K. Williams) is a ‘Stick-up boy’ with a code. He gets his ends by relieving the local drug crews of both their profits and their product using the business end of his double-barrel shotgun. He claims to only prey on those who are deep in the game and not on any one he considers to be a ‘regular citizen.’ Omar’s efforts spark the ire of those in the drug trade’s hierarchy and they do strike back at him  on more than one occasion and the cost of their retribution is high.

Those are just the main characters that caught my attention. As you watch, The Wire you’ll pick out your own favorites, I expect. Simon based a lot of the supporting characters, as well as a few of the main ones, on real-life people: drug dealers, cops, stick-up boys and politicians in Baltimore. The series even features several real-life Baltimore and Maryland politicians, crooks and cops in small supporting roles. Former Baltimore City Mayor Kurt Schmoke even plays an advisor to a mayor who’s weighing the pros and cons of a police commander’s efforts to legalize drugs as a way to reduce the crime in his sector. Mayor Schmoke actually supported just such a  strategy. But the most absolutely bad-ass, ingenious bit of casting,  is former real-life Baltimore drug lord ‘Little’ Melvin Williams, who has a recurring role, beginning in the third season, as an influential church deacon who dispenses effective bits of wisdom some of his fellow characters.  Now there’s some irony for yo’ ass!

Simon has likened the show to a visual novel and the slow pace in the initial episodes can take some getting used to. Trust me, it’s well worth your time.  Soon enough The Wire’s characters and storylines will have you ‘deep in the game’.

2 thoughts on “Get Into It: The Wire”

UnREAL's debut episode gets all the details right: the bland male prize, the mansion, the fountain, Shamiqua handles the mini...