Our Special Contributor Tracey M. tells us all about this week’s “Extant”, in which Halle Berry’s Molly really ratchets up the anger. Near misses with inbreeding aliens can do that to a person. Read Tracey’s recap and find out more. If you’re just checking in with this season, you should see her previous recaps. – David F. 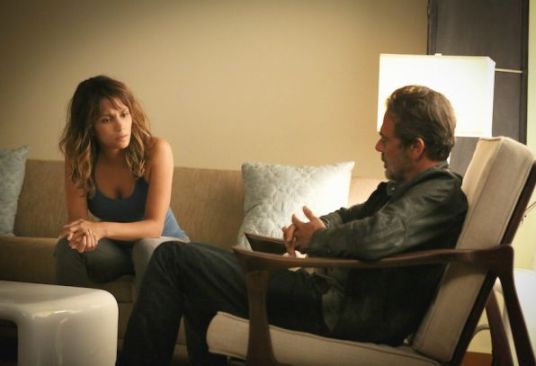 We’re taken back five months, for a visit to the county morgue. Molly’s alien son is lying in an open body bag, awaiting government pick up. As the two morgue workers pass the time, they hear rustling and see the body bag start to vibrate and shift. I don’t know about the typical morgue worker, but I think it might be time to skedaddle. Anyway, the boy’s chest cavity splits open, and his juvenile body is shed like a snakeskin. He emerges a young adult (now played by Brody Lee ), and quickly sizes up one of the morgue workers. His eyes glow yellow (our sign that he’s using his powers) and through mind control, he takes the man’s clothes, and leaves him naked and sobbing on the floor. In his new duds, complete with a fat wallet, he walks out of the morgue, and secures a nice apartment for himself under the name Mrs. Nelson, using “golden eye” again. Mind control pays! He powers on every media device at once and absorbs all of the data necessary for the next stage of his transformation.

Back to present day, under the the guise of agreeing to return to the Restwell facility, Molly tells JD she needs a few things upstairs first. He grabs her arm and tells her no more funny business. (C’mon, JD, you know who you’re dealing with!) They lock eyes for a long moment and JD slyly slips a tracking device into her arm. A few minutes go by, and an impatient JD  goes upstairs to find an open window and -surprise!- no Molly. JD is clearly a sucker for a pretty face.

After cocooning in his apartment, Molly’s son is now a handsome young man. The alien walks into a bar (no, this isn’t an alien joke) and sees Molly seated. He asks if the seat next to hers is taken. ” It is now…”, she croons. They’re clearly drawn to each other. He tells her his name is Adhu (Henderson Wade) and perhaps they did meet before, “after all it’s a big universe.” Hmm… not a bad line, wonder if he downloaded that. He spies security cameras, and easily disables them. The two flirt back and forth, then head out to the alley; someplace a “little quieter.” (Oedipus, anyone?)

Meanwhile, General Toby Shepard has located Adhu. His facial-recognition cameras have picked up Adhu’s location and he is shocked to see Molly sitting next to him. Within moments, Adhu’s interference has shut down Toby’s monitors, but he decides to go ahead with his planned drone strike, despite still having feelings for Molly. (can’t trust him with or without that eye-patch!)

As JD catches up with Molly and Adhu, he interrupts the pair just as mom and alien son are about to kiss. Don’t you just hate it when that happens? JD has his gun trained on Molly, since she’s made a fool of him more than once. Adhu gives JD “golden-eye”, and JD starts to point the gun at his own temple. Looking into his golden eyes, Molly realizes Adhu is her son and is shocked by how quickly he’s reached adulthood. Molly pulls rank as his mother, and demands he “stop it right now!” through gritted teeth. The drone hits the bar. Dazed from the explosion,  JD and Molly are held at gunpoint by government agents. Adhu has escaped, and left JD with a lot of questions.

Molly and JD are separately interrogated by Agent Velez (Negar Zadegan). JD remains an uncooperative smartass, despite Velez’s best efforts – which include a spray that causes suspects to feel sleep-deprived. (How about a handful of roofies from Molly instead?)

Molly is uncooperative as well and pissed off by the entire operation. She wants to know where Adhu is, and confronts the two-way mirror, demanding to know who had the balls to blow up a bar full of innocent people. She screams that she knows there’s been a cover-up and she wants answers!

Toby Shepard is watching, and decides to speak with Molly alone. He knows she brought alien spores home on her arm after removing a glove in space. Besides the headaches and blackouts, the rash on her arm seems to react when her son is seeking her out.

As Toby enters the interrogation room, Molly launches herself at him, fists flying. See I told you angry Molly was great. She has lied for her government and now feels betrayed. She tells Toby he’s a fool for wanting to be alone with her (she could throw a beatdown his way – I’m just saying…). He begs for her help in finding and ultimately killing her son. She agrees. But despite some kick-ass gun training with Agent Velez, Molly isn’t sure she can go through with it. She and JD are both released, with JD receiving a stern recommendation from Toby – “Forget you ever met Molly Woods.”

As Molly rests at home, she hears creaking downstairs. Gun in hand, she goes downstairs to find JD ( I guess he didn’t forget). After the grueling interrogation, he’s starting to believe Molly.

She sits with him and shares her story. She believed Adhu was dead, but knowing he’s out there somewhere, she and JD come to the same conclusion – Adhu is The Impregnator! Molly begins to scratch at her rash and tremble, the lights flicker, and she forces JD out at gunpoint. The entire grid goes dark, and Adhu has come to Molly.

She asks what he wants from her, and he shows her nine golden-eyed children. He says his mission is survival for his kind, and urges Molly to be “with us, not them”- the agents that want him dead.

Molly fades in and out of consciousness. Dazed, she shoots wildly at Adhu. As she slowly approaches to look into her son’s face one more, she instead finds Toby Shepard, lying in a spreading pool of blood.

At the lab, Julie works closely with her partner, Charlie Arthurs (Tyler Hilton).   Government agent Anna Schaefer (Hilarie Burton) is expecting the new Humanich, Lucy to be combat-ready. Ethan’s been told Lucy is a soldier, and wonders if he, too will become a soldier. Julie reassures him he will always be Ethan. He keeps having flashes of Molly’s face, and they cause him to short out, at times losing consciousness. (futuristic baby-mama drama!) He asks Charlie, “Who is Molly?” As Charlie becomes suspicious of her motives, Julie decides to distract him with a kiss.

A confused JD pulls up in front of his home; his daughter greets him tearfully. She’s in trouble: “Dad, I’m pregnant.” Looks like JD has another reason to see Molly!

Stay tuned! Things are moving along quickly this season. Is Molly as crazy as she is angry? Is Toby really dead? Will JD and Molly hook up? And who’s the baby-daddy?

Our new guest contributor Tracey M. takes on the second episode of the second season of Extant. Here's what we...