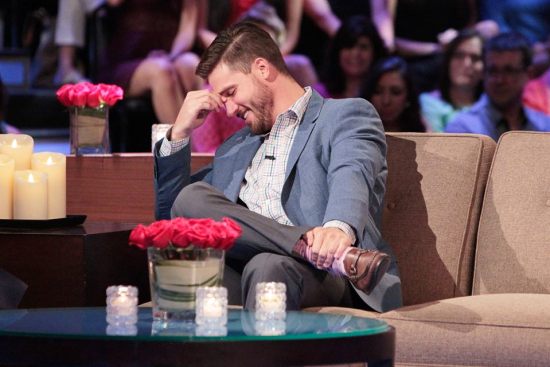 So, here’s what happened, I got lured back into watching The Bachelorette and I needed someone to discuss it with. Despite her better judgement, Geri gave in because we go way back. The caveat is that she gets to send me hostile e-mails and messages after the episode. Here are stream-of-consciousness thoughts from TVRD editor-at-large, Geri. — Elaine F.

Okay, Ian is either a stand-up guy or he is batshit crazy. Ah, you had me for a minute, but then you blew it — as an example of your humility? Truly humble people don’t point out their humility.

I call foul — they all hated Nick, they all had a problem with it and now they are trying to be all Zen about it and throwing the guys who are telling the truth under the bus. Revisionist history.

Both of the Bens were too good for her.

NOOOOO  Jared don’t do Bachelor in Paradise, it’s for the crazies and losers.

A standing ovation, really?  A role model?!  Yup right up there with Malala Yousafzai.  This is so tiresome

Okay, notice when she stands up — her dress is see-thru and is only about an inch-and-a-half away from being underwear, yet she wonders why people talk about her.

Wait, why are there back-to-school commercials on July 20th?

Thank goodness there is only one more week of this season. When Judgment Day comes I feel I will have to explain why I squandered these hours of my life. I will pin it on Elaine.

[Editor’s Note: Don’t tell her, but I expect her to watch The Bachelor with me. — Elaine. F.]

For full recaps please check back for Andrée H.’s take on the “Men Tell All.”

The Bacheleorette airs 8/7c on ABC

Some viewers, and by that I mean editor-at-large Geri M. and myself, mock The Bachelorette, but TVRD's special contributor Andrée...