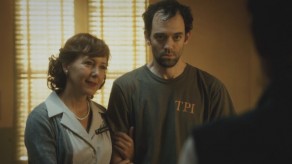 Backstory: A nurse who claimed the lives of 21 patients in the ’50s. She fed them drugs and prodded them to commit suicide. Lambert was caught in 1958 while working at Tarrytown Psych and was sent to the electric chair in ’59

Recent Developments: Sheriff Reyes sent Abbie to probe into a recent series of suicides at Tarrytown Psychiatric Hospital and Lieutenant Mills brought her sister Jenny, a former inmate along. They discovered that Nurse Lambert was behind three suicides in as many nights. She almost pushed Captain Irving to drown himself. It was revealed that she also drove Abbie and Jenny’s mother to suicide.

James Colby was hailed as a visionary who would document early America through his paintings. Colby wasted his talent on...