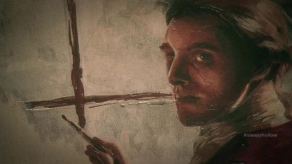 Backstory: James Colby was hailed as a visionary who would document early America through his paintings. Colby wasted his talent on drunkenness and lechery and was kicked out of George Washington‘s circle. In exile, Colby traveled around exchanging portraits for food and board. In 1781, a string of murders became known as the Durham killings. Each victim was suspended and had their throat slit. Katrina’s friend, Abigail Adams showed great interest in the case. John Adams, a lawyer, sought justice for the victims. The murders went unsolved and Colby disappeared in 1782.

Recent Developments: One of Colby’s paintings, an unfinished self-portrait, was on display at the Historical Society, Katrina had no recollection of the piece, which was said to have hung in the Adams home. Art restorer Grant Hollister had worked on the painting. During a Crane date at the Historical Society dinner, Hollister was found with his throat slit and suspended upside down. By touching the painting, Grant had deactivated a curse which would allow Colby to finish the portrait with his victims’ blood and be resurrected. Abigail Adams had discovered Colby was the killer and allowed herself to be captured, giving Reverend Alfred Knapp a chance to trap Colby in his own painting. Abigail held on to the painting in order to keep an eye on it. Katrina conjured up a doorway so that she and Ichabod could enter the painting and finish off Colby, but it allowed the murderous painter to escape into this realm. Abbie Mills arrived and shot Colby and the painting, stopping the resurrection.

Given To: Murdering orphans and vagrants by slitting their throats and suspending them.

Mission: Resurrection by escaping through his self-portrait.

One thought on “James Colby Bio”

The treasure Hunter took in 12-year-old godson, Nick Hawley, after his parents died. She taught him the tricks of the...