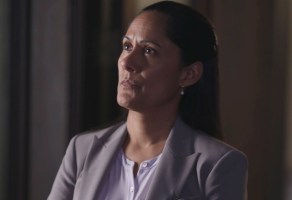 Backstory: The tough-talking cop left the Sleepy Hollow Sheriff’s Department for a position with Border Control.

Recent Developments: After Sheriff Corbin’s death and Captain Irving’s imprisonment, Reyes returned to the Sleepy Hollow police force. She immediately fired Ichabod from his role as a history consultant and arrested Jenny, who was caught with weapons. It was revealed that Reyes knew Abbie and Jenny’s mom and played a critical role in having Mrs. Mills committed to Tarrytown Psychiatric. Jenny blames Reyes for the Mills sisters’ placement in foster care homes and for their mother’s subsequent suicide (It was later revealed that Reyes was not to blame.) 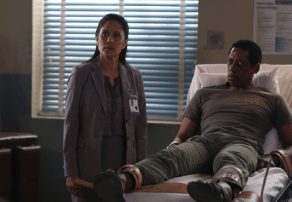 All Heart: When incarcerated Captain Irving requested a transfer to Tarrytown Psychiatric, she agreed, but threatened to subject him antipsychotic drugs and electroshock until his lawyer Henry intervened. The new sheriff thought Irving was keeping something from her, though he already told her that evil forces are behind the troubling events in Sleepy Hollow…. After Ichabod helped with a case, she seemed more receptive to him and came to rely Ichabod and Abbie solving cases. Recently, she’s taken to sending texts and hasn’t been seen on screen….

Distinguishing Features: For a while the undead cop wore a police uniform and had an obviously deformed neck. Eventually he...