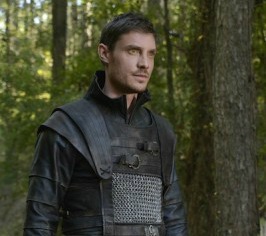 Backstory: He served as an Angelic Host until he broke ranks. Orion has appeared in the weeks before great catastrophes. He was at Pompeii, before the eruption of Vesuvius in 79 AD. He was In Syria, at the site of the Antioch earthquake in 526 AD. Orion was also in Byzantium, in the weeks before the Justinian plague in 541 AD. After Orion lost a battle with the Horseman at Valley Forge, Moloch chained him in Purgatory. Orion was held captive for 200 years.

Recent Developments: There was a great quake on the night of Moloch’s death, six weeks earlier and he escaped. Abbie and Ichabod met him at Wilcox Farms. He helped Ichabbie by killing a Daevoli with his Halo and says the lesser demons who were unleashed from Purgatory are seeking a new master, The Horseman of Death. Orion resolves to kill the Horseman and take his power in order to wipe evil from the earth.

Mission: To rid the world of evil.

Given To: Dramatic entrances.

Well, that Backfired: Orion’s talk about cleansing the world of evil — including Katrina made Abbie realize that he was a zealot. Considering him more of a threat than the Horseman, Abbie and Ichabod destroyed Orion’s Halo before he could slay the Horseman. Before the Horseman could defeat him again, Orion flew away.

Parting Gift: Orion gave Abby a circular charm that she can use to summon him.

One thought on “Orion Bio”

Distinguishing features: a prickly attitude and a droll sense of humor.