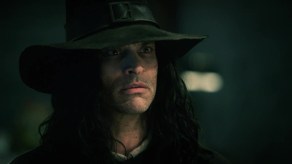 Backstory:. Kent, born in 1661 was a respected Puritan minister/warlock in the Massachusetts Bay Colony. He was the leader of a secret benevolent coven. He was fixated on Sarah Osborne, who rebuffed his advances. Kent accidentally killed her and covered it up by mystically disfiguring the victim’s corpse and accusing her of attacking him with witchcraft. Katrina‘s grandmother, Helena Van Tassel, tried to talk some sense into Kent to no avail. He outed her as a witch and was responsible for the Salem witch trials. He was known as the warlock all witches fear. Eventually, the surviving witches exiled him to Purgatory.

Recent Developments: In the wake of Moloch‘s death, Kent is able to flee Purgatory. The warlock shows up at a White Plains auction house in search of the Grand Grimoire. The Grimoire was originally the journal of John Dee, a sorcerer in Queen Elizabeth’s court. The book contains forbidden spells. Forensics revealed that Kent’s blood is laced with Alkaloid, a compound commonly found in a plant, Jimson weed. Kent uses it to boost his powers. Solomon was able to use a spell to draw the Grimoire to him, but Dee placed a hex on the book so that no one could access it unless the book was whole. Pages are missing so Kent can’t use it yet. Katrina helps Ichabbie track Kent down and he can see that Mrs. Crane is a witch. He doesn’t think she’s a very effective one and offers some advice, walk the path she was meant to — the evil one. In addition to career counseling, Solomon summons some freakish bloody demons to slow down Abbie and Ichabod. Kent finds the missing pages of the spellbook and escapes with it. By reading Grace Dixon‘s journal, the team figures out that Kent wants to perform “The Traveler Spell” to jump back into the past and be with Sarah. Katrina’s magic flows from the  elements of nature, which is exactly what they need to essentially give Kent a Jimson weed overdose. Unfortunately, Katrina’s power is running low so Abbie figures she can MacGyver the situation with a generator and firehose, which will help manufacture lighting. With Captain Irving‘s help, the Witnesses head to the woods to zap Kent. The warlock makes a flippant remark about Katrina and Ichabod delivers a beating. When Abbie and Crane turn away, Irving crushes Kent with his foot and the Warlock disintegrates. Though he told Crane and Abbie that the book also disintegrated, Irving secretly has the Grimoire.

Distinguishing Features: Sickly pale skin, walks like a creeper, sports a big black hat and whispers in an eerie manner.

Famous Last Words: “Tricks will not protect you. I have defeated your spellcaster. She understands my power.”