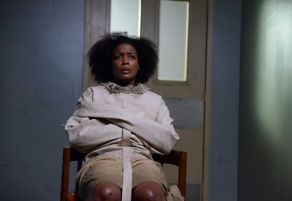 Backstory: After she seemingly suffered a breakdown and was hospitalized at Tarrytown Psychiatric, Lori’s daughters went to foster care. Abbie assumed her mother was crazy. When Lieutenant Mills read documents chronicling Lori’s talk of demons, she changed her mind about her mom.

Recent Developments: After a series of suicides at Tarrytown Psychiatric, Abbie and Jenny went to the hospital to investigate. They found a video which showed their mother’s ghost in the room with a man who committed suicide. The Mills sisters thought that their tormented mother, who had committed suicide 15 years earlier, was haunting the hospital. Abbie and Jenny came across another video from one of Lori’s psychiatric sessions in which she insisted that Nurse Lambert pushed her to kill herself. The interviewer maintained that the nurse was a figment of the patient’s imagination but Abbie and Jenny knew there was still a Nurse Lambert walking around the hospital. Abbie and Jenny finally understood that all of their mother’s actions had been to protect them and Mama Mills had been aware of Abbie’s role as a Witness all along. Before her spirit was freed to leave the hospital, Mama Mills directed her daughters to Grace Dixon’s journal which held secrets on fighting evil.

Theme Music: “You are My Sunshine.”

One thought on “Lori Mills Bio”

Grace worked at Fredericks Manor, a sanctuary for freed slaves. It was discovered that Grace was one of Abbie’s ancestors.