The Royals Recap: “To Show My Duty in Your Coronation” 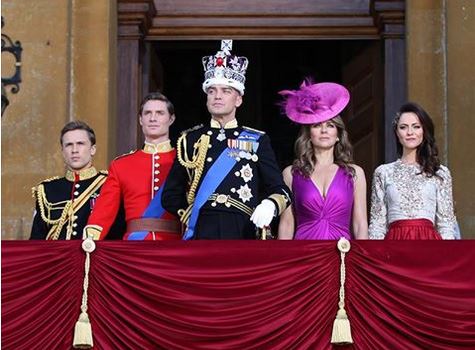 Beware the wolf in sheep’s clothing; that’s exactly what the Royals have in their midst. The family is being played by one person they hold dear and Robert’s coronation day will reveal the source of the darkness lingering through the palace.

After his secret tunnel conversation with Jasper about Robert’s ‘death,’ Liam goes to the island to see the wreckage for himself. He returns with Robert’s helmet and confronts him about leaving the island.

Robert initially told the press he got off the island as quickly as he could, but Liam’s research showed the boat that saved Robert had passed by multiple times before he flagged it down. Robert might have been trying to survive, but he was not trying to come home.

Though Robert denies all of this, Liam says he wasn’t mad that Robert returned, just that Robert left him to deal with the aftermath of their father being murdered.

Liam then sits Eleanor down to talk about Robert. Len sides with Robert, because she believes he walks on water. Len says that she and Liam were just  the family “spares” and that the crown was always Robert’s destiny. Liam tells her their older brother’s changed and Len responds with, “Yeah you have. You’re acting like Cyrus, so get your shit together.”

Liam’s next stop is Kathryn. Kathryn tells Liam she hasn’t heard from Robert since the night he was named the next king. Liam being Liam says he’ll talk to Robert for her because he would do anything for her.

Like everyone else with a heart, Hill’s daughter Sarah Alice wants Jasper and Len back together. So Sarah Alice brings Len the fairy tale book she built with Jasper on Christmas. This obviously brings tears to Len’s eyes because this is what she’s wanted from Jasper this whole time: validation of his love for her.

Jasper goes to see Len and he starts by telling her that Sebastian is a good guy. Sebastian is apparently so good that even Jasper couldn’t find dirt on him. But that doesn’t stop Jasper from telling Len how much he loves her and that they’ll find their happily ever after. He tells her that she’s his girl and he will love her no matter what.

Len, confused and still heartbroken, goes off about how she bared her feelings to him in her Christmas letter and there’s no way that if he loved her as he says, he would have left. Alas, Jasper never received the love letter. Interesting.

Liam runs into Helena and tells her he won’t be at the coronation. Helena mentions him being an ungrateful spare and Liam shoots back that Robert is manipulating her and she’s either too vain or stupid to realize it. This family obviously has no boundaries.

Helena slaps him for that. But Liam won’t leave without the final word: He shoots back with, “I hope you’re right about Robert, because he’s the only son you’re going to have when this is all over.”

We see a flashback of Robert and Simon. The two are playing chess and Simon tells Robert that Liam is all heart and determination, while Robert’s take-no-prisoners attitude will be his downfall. Simon proceeds to tell Robert that he’s disbanding the monarchy mainly because of Robert, who he says would not be a great king. Ouch.

On coronation day, as Len, Helena, and Robert are about to walk out the door to be crowned, Liam stops Robert. In hushed tones to each other, Robert says it’s a shame he won’t be joining the family. Liam responds by saying it’s a mess Robert created.

That mess is shown in mix of flashbacks:

In the first flashback, Robert shows up at Kathryn’s door. After sleeping with her, Robert tells Kathryn that he saw her on the island and she was the reason he came back. Robert then drops the bomb saying it will be difficult to never see her again.

Kathryn, confused asks why and Robert says it has to do with her sleeping with Liam and never telling him. She asks why Robert kept coming around to see her. On his way out the door,  Robert says, “let’s face it, you’re kind of a whore in bed. It must be that common blood in you.”

Welp, end of that relationship.

In another flashback, Len has just put her heartfelt love letter to Jasper in their secret spot. After she walks out, Robert comes from behind a secret door and reads the letter. After throwing it into the fire, Robert calls Jasper’s father with a proposition, aka the reporter digging into Jasper’s past.

Ladies and gentlemen, I think we found our wolf.

In the present while Robert is being crowned, Cyrus is in his room with a loaded revolver about to pull the trigger when Liam walks in. All Liam says is that he needs Cyrus’ help and closes the door.

It’s a tense couple of hours for the Royals leading up to the decision from the privy council. Through a...