Royals Recap: “Together with Remembrance of Ourselves” 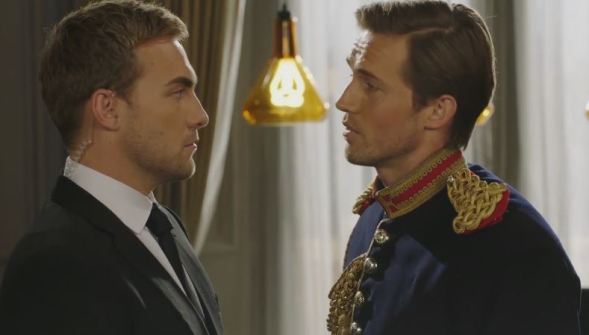 We rejoin The Royals two weeks from where the season 2 finale left off and a lot ended in that episode. We learned that Head of Security Ted Pryce was the King Slayer and he was exposed in a very public arena. Oh, and then he was killed by an angry mob of Brits. Not a pretty way to go.

Now, Liam is dealing with his inner demons and feels somewhat responsible for Ted’s brutal death. This has led him to be Mr. Perfect Prince during the day where he goes on talk shows and charity events. But at night, it’s a different story. What happens at Fight Club stays at Fight Club, and that’s exactly what Liam has gotten himself into: an underground fight club.

He’s also still friends with Wilhelmina, who is good for moral support, but she’s offering more than that. Queen Helena discovers that Wilhelmina started the #KingLiam movement and she apparently wants in. This movement has driven Helena to prove her children are the rightful heirs to the throne instead of the incredibly unpopular Cyrus.

Helena planned to have a DNA sample retrieved from Simon’s bones, but, low and behold, Cyrus had them tossed in a river, because everyone knows you can’t do a DNA test if you don’t have a body. Helena then tries to steal DNA from Cyrus, but the hated king has locked himself in his chamber.

Not only is he getting cabin fever, but Cyrus is losing his hair because of cancer. So what does he do? He shaves himself a Mohawk,  not a good look for a king. But remember, this isn’t your normal royal family.

While in his quarters he meets with Jeffery Stewart, the man trying to blackmail the royals. Yeah right, like you could actually blackmail an entire royal family. Cyrus hands him a drink and tells Stewart it’s not poison… It’s totally poison. Not only does he hand Stewart poison, he hands him an anecdote – that is just more poison. Way to never play by the rules, Cyrus.

In positive royal news, Helena has tapped Mr. Hill to be Head of Royal Security and he asks Eleanor’s permission before making his final decision to accept. How cute. This is all after he tries to help rekindle the spark between the show’s best couple, Jasper and Eleanor. Elasper? Jasnor? The jury is still out on the name.

Eleanor has to sit through sorry pitches of items she will ‘brand’, and the new-and-improved Jasper comes in with the final pitch. Swoon. Jasper is all awkward and precious as he tries to win Eleanor back and boy is she making him work.

Eleanor ultimately forgives him, because why wouldn’t she, and Jasper is caught on camera doing a happy dance in the tunnels. Oh, and Mr. Hill shows the princess the video and it’s the cutest thing ever! However, later on, Eleanor is back playing mind tricks and she ends up getting Jasper to help paint her doors an awful green color. She should have stuck with the red spray paint from her tantrum in season one.

We can’t forget the most intriguing new character of the season: Prince Robert. We finally meet the supposed-to-be-dead prince on a deserted island. He’s the British version of Tom Hanks in Castaway, minus Wilson. What’s most intriguing about Robert is that when he sees a boat in the distance and a chance to be saved, he doesn’t signal for it, instead he hides.

Eleanor: “Jasper don’t give up on me”

After Liam and Ophelia leave for their new life together, Gemma slinks up to Marcus and notes that Ophelia was...