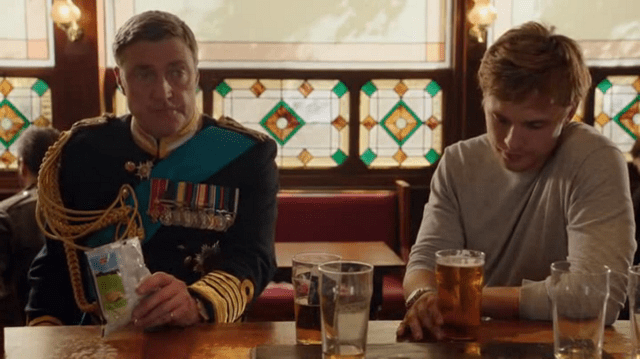 Okay, this a trippy episode, King Liz Hurley’s husband was attacked and he is in critical condition. You’d think that Prince Liam would step into the role. He wants to do that so he can carry out his father’s plans to end the monarchy. Not so fast, Liam. Shifty Prince Cyrus gleefully announced that neither Liam nor Eleanor are the king’s heirs, somebody else sired them! The Queen obviously slapped her brother-in-law’s face and then when they were alone, they smirked and clinked glasses. They were in it together! Let’s go!

The royal formerly known as Princess Eleanor confronts Queen Liz Hurley. The Queen, by the way, remains the Queen until Cyrus marries. In other words, she’ll be Queen forever.

Helena: You bitch, I bet you killed my brother, too.

The Queen: Don’t be silly he killed himself. Comforted now?

Helena: I am getting even with you by destroying these fancy pillows.

Coffee Girl still gets to wander around the palace. When she sees Gemma. it goes like this:

Coffee Girl: Send my love to Liam. I know you’ll do that even though he was your boyfriend and now he’s with me. So just be a lamb and tell him to get in touch with me.

We always ignore those dreadful redheads who are supposed to be comic relief, but are neither comical nor a relief. They can’t wait to assume the throne the minute Cyrus dies and run around in stupid outfits for no reason. They attempt to move into Eleanor’s room, it doesn’t work well. She roughly tosses them out. Princess or not, Eleanor is still a BAMF.

King Liz wanders around talking to his kids, comforting them and offering advice. So that means he’s dead right? No, this is some kind of astral projection thing. He pops into the tavern and chats with Liam. The vision of the king is more fun than the actual king. He plays darts and doesn’t run around trying to abolish the monarchy. His words of wisdom are questionable, though. Liam ends up sitting on the street crying in the rain. He’s being Prince Lame.

Just because she schemes with the Prince Regent, doesn’t mean she won’t backstab him. The Queen summons Nigel Moorefield, who is leading the charge to dismantle the monarchy. She plays let’s make a deal. If her husband and Cyrus die, she’d ask Parliament to give her power to rule. Once she dies, they can abolish the monarchy and Moorfield will get all the credit. Just to sweeten the deal, she introduces him to those horrid redheads. Obviously nobody wants those two near the throne. Her plot sounds reasonable.

Gemma and the Queen have a talk, too. It goes like this:

Queen Liz Hurley: I like you, too bad you can’t be Queen anymore. At least you don’t have to pretend to love Liam.

Gemma: I kinda love him, I’m being vague. Let me help you deal with the public. Don’t be a bitch.

Queen Liz Hurley: You have the best ideas.

Surveillance footage reveals a hooded man lurking about the palace.  Did he have anything to do with the attack on the king? He grabs Eleanor:

Hooded Guy: Your brother, Robert, didn’t commit suicide. I  know becuse I killed him. Now, just come with me. What could possibly go wrong?

You know what's a really poor life choice for a king? Making a televised statement urging Parliament to abolish the...