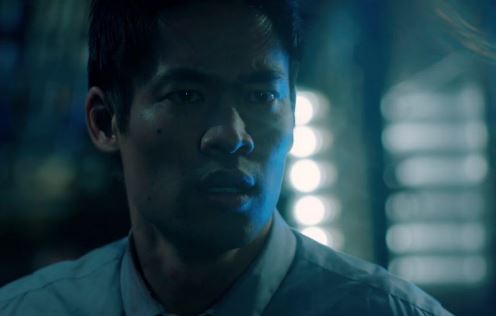 Now that the OG crew is back together again, Alex, Rayna, Ryan and Will have to get the hundreds of hostages safely out of enemy territory. It’ll be a challenge for the group since they still don’t know who the terrorists hiding among them are.

THIS WEEK’S PAST: The assignment is for the recruits to break into the NSA and remove their digital footprint. The idea is for them to be able to control how and what people see enabling them to erase their drives.

Lydia shows up in the middle of class to assist her father, however, that’s not the whole story. She wants to use the recruits’ assignment to get them into the NSA and have them import a tap within the infrastructure. This will allow the AIC to have access to every phone call and email every sent or received.

But the girl has no idea her father is running counterpoint. Owen gives Alex a special assignment to try and tap the AIC’s tap. While inside the NSA, Ryan is the one who plants the tap in the control room. Alex follows Ryan’s move and places her tracker on his tap.

In the end, everyone was cleared from the NSA, except for Leon, because Dayana tampered with his power box prohibiting his escape. This means Leon is officially out of the AIC and The Farm. Good news for Leon, he’ll never have to kill someone ever again.

Later that night, Owen and Alex follow the tracker they put on the AIC’s tap to see where they information is going. The tracker takes the duo to a warehouse where they find a room filled with photos of all the recruits, including Lydia. This means that whoever was using the tap is targeting the group and not the CIA as a whole.

At the same time Ryan meets with Lydia. He wants to know exactly what the AIC is doing. She tells Ryan that what they’re doing isn’t wrong. In fact, they never killed anyone while recruiting him, Leon and Dayana, it was just perception. In layman’s terms, Lydia is running a black ops program on The Farm, not a rogue faction.

THIS WEEK’S PRESENT: Alex is leading the hostages through underground tunnels hoping that whoever is with the AIC will show themselves. While in the trenches their group starts to diminish. Their plan to sweat out the AIC in the tunnels has started to backfire. The AIC is hunting them.

The lights in the tunnel go out, leading to mass chaos. Alex gets shoved to the ground and her gun gets swiped in the process. The lights come back on and Harry calls out to Alex. When she turns around there stands Harry with a gun to his head. Holding the gun is Sebastian’s wife Carly who Sebastian first met during an assignment on the Farm. Sebastian and the group assumed she worked for the government doing basic tasks; looks like she is part of the AIC. The AIC wants Will because he is the only one who knows who all the members of the AIC are. While Carly is spouting off demands Sebastian steps in to protect Harry. Carly gives Sebastian the choice of her or Harry and well, Sebastian points his gun at Carly.

Not fazed that her husband chose Harry over her, Carly gives Sebastian one more chance to hand over Will or she’ll shoot Harry. As she counts down Sebastian pleads and instead of shooting Harry she shoots Sebastian in the chest. As he goes down, Sebastian gets a shot off nailing Carly square in the forehead.

Rushing to get Sebastian to a medic, the group gets all the hostages outside where the FBI is waiting. The group thinks they’re safe until they realize that Will is missing. During the commotion, Carly sacrificed herself so the AIC could kidnap Will.

While trying to figure out where Will is Lydia shows up large and in charge. Alex confronts her and Lydia stops her in her tracks. Lydia says that she had to hide the drives the AIC were after. Come to find out, the terrorist who kidnapped Will also found the drives and has them. Lydia only trusts Alex to go back in and retrieve them.

But why Alex? Because the terrorist is Alex’s former roommate Dayana and now she’s the only one fit for the job.

Alex still feels the need to be the hero as she risks her life, again, to save innocent people. The...