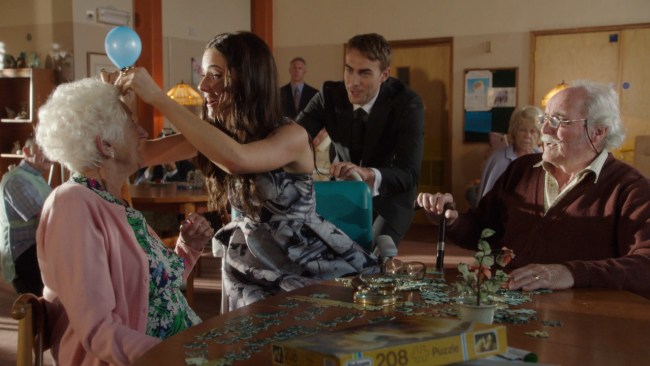 The people of England are getting perilously close to canceling the monarchy, but Queen Liz Hurley and her deliciously bitchy prince-in-law are determined to get renewed for another season and have no intention of giving up without a flight….  The royals take their private jet to woo the little people. Prince Liam and Gemma, his ex-girlfriend and possible future queen, are along for the ride. This plane is posh, it’s up to an Airforce One level, but decidedly more fun since Frank and Claire Underwood sulked and pouted all season. Frank and Caire were determined  to hold on to the presidency and Queen Liz Hurley is determined to hold onto the royal family. Forced to choose, I’d wager my pounds on the Queen.

The late Prince Robert, the rightful heir, was terrific at charming villages. Prince Liam, the heir, does everything wrong. He turns his nose up at the locally made cheese and is an all-around bore. Gemma takes time out of trying to induct him into the mile-high club to offer advice: Liam should be himself and act interested. I’m not sure he wasn’t being himself when he behaved like a jerk, but he takes Gemma’s words to heart. At the next stop, Liam engages in trash-talk about which football team is the best and invites the locals to grab a pint. His man-of-the-people moment earns him some admiration, but not everyone is impressed.  A barmaid tells Liam that instead of just being a personality, he needs to do something that actually makes a difference in lives. Liam goes off to brood and comes across a leather tanning shop where a young man is tanning saddles, it’s the family business. The guy would really like to make shoes, but family duty is holding him back from being the next Jimmy Choo. The prince proves himself by making sure he’s photographed in the shoes, which means the tanner will now be in the big time, outfitting celebrities on the red carpet and able to kiss his dull saddle-making family goodbye. See you at the Oscars, suckers! The barmaid is duly impressed.

Princess Eleanor stays behind to tour local hospitals etc and garner good will. She starts her day with a hearty breakfast of booze, a few hits off the bong and some X. Who fills the bong water? Does Jasper do it? Does it matter if it’s fresh? The ’80s were a long time ago, I don’t remember bong protocol. It doesn’t matter, a little substance abuse helps the princess be her most endearing. She livens things up at an old folks’ home by entertaining them with her JELL-O-slurping antics and doing the kind of shit Eleanor does because the princess is the best character on this show. Jasper drives her to an animal clinic and a children’s hospital and everything is going swell until she has to visit a rehab clinic. Eleanor, who is still as high as a kite, gives some junkie extra a pep talk and then goes home to tell Jasper to stop taking advantage of her with blackmail sex. She orders him to “take advantage” of her. That’s a direct quote. It goes like this:

Jasper: Are you sure about this? I am arguably a rapist.

Eleanor: Let bygones be bygones. Get over here. I’ll probably send you mixed messages in the next episode.

In commoner news, Coffee Girl explores what it’s like to be a commoner with her new love interest Nick. This is despite the fact that Coffee Girl is indeed a commoner herself. He takes her to eat paella (Look, there are bohemian black and Latino extras at the table! You don’t see that every day at the palace, I am soooooo cool.) They also enjoy a pop-up dance party. Everyone wears headphones, so it’s a silent dance party. Coffee Girl is 50, so she’s amazed at all the fun stuff the kids today are up to. Coffee girl doesn’t have any points, but let’s give her one pity point so she doesn’t feel bad about being a complete snooze.

Back to the tour, a little moppet tells Queen Liz Hurley that her mother wanted to be there but had to stay behind because the cows are sick. In a shocking revelation, the Queen knows all about cows and does not like this at all. Cow Mom informs the Queen that the local distillery is doing something or other that is making the cows sick. The Queen visits the distillery and it goes like this:

Queen Liz Hurley: I’ll help you out by serving your swill at the palace, it will make you rich just like that thing Prince Liam did with the shoes.

That night, the Queen and Prince Cyrus watch a news report. Somehow the distillery burned to the ground. That happens when you mess around with the cows.

Coffee Girl is mad because she saw a headline about how Liam should marry Gemma, so she takes to Instagram and posts photos of herself kissing what’s-his-name, the one with the paella. The prince shows up, invites her to attend a masquerade ball and gives her two tickets. Why two? Coffee Girl can bring her boyfriend,  Paella Boy. Buuuuurn! I desperately need this masquerade ball to end up with some mistaken-identity sex. Please make that happen, Show.

50 points for the Prince.

Queen Liz Hurley takes Liam’s points away though. In a conversation with Cyrus, she notes that the people are still not that into the royal family and  Queen Liz Hurley’s Husband is talking smack about abolishing the monarchy. Liam is too much of a wildcard, they need to explore the options. I don’t know what that means, but I think the  Queen and Prince Cyrus might start killing people who stand in their way.