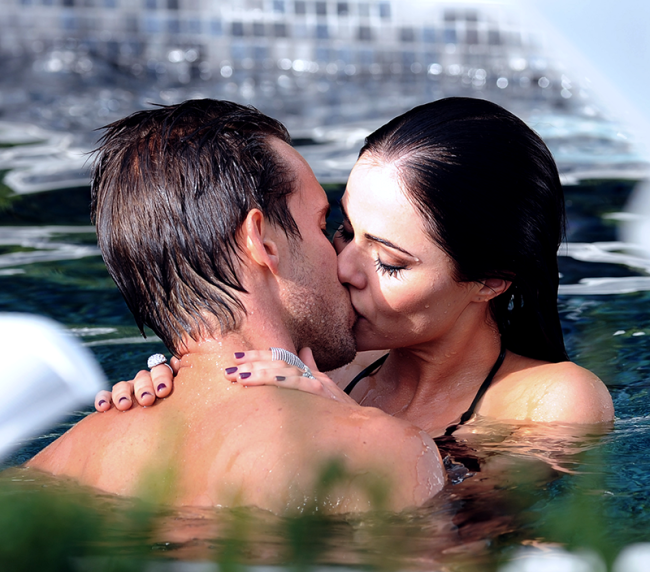 Yay, it’s time for a weekend in Monaco! Ophelia accepted Prince Liam’s invitation and now she really gets a taste of how rich kids and royals live. For one thing, royals tell the TSA to shut up and sit down. Customs officers board the royal jet because they have some silly idea about inspecting luggage. Nope! Princess Eleanor reminds them that it’s a diplomatic bag, which means they can’t check it. Where can we get one of those?! Princess Eleanor can’t resist rubbing it in so she gloats about all the fun things she’s packed including sex toys, weapons, and all of the drugs she can think of. Unfortunately for everyone those hideous redheads are aboard for another failed effort at comic relief, aside from mentioning that they forgot about the diplomatic rules and shoved recreational drugs up their bums, let’s continue to ignore them and refuse to learn their names. Shut up and sit down, redheads.

At the villa in Monaco, Eleanor’s first order of business is to taunt Jasper, who is back at the palace. Now that he’s admitted to lying about the sex video, she hops on Liam’s goofball friend, Ashok, to taunt Jasper with a mock sex tape. There’s only one thing that rattles the Princess and that’s the sight of sexy Beck. He’s a friend of the late Prince Robert and was Eleanor’s first. She didn’t know Liam invited Beck and tries to play it cool but is really freaking out because she’s so into him. Eleanor is adorable when she’s spazzing out.

Poor Ophelia, every time she turns around there’s Gemma, who arrives with her tiny bikini and posse of bootleg Mean Girls. Why is she even around? Can’t the Prince just tell her to get lost? The heiress is still not giving up on Liam and tells the Prince the people of England will never accept an American commoner who won’t shut up about her love of coffee. Will the people of England accept a girl with trashy dark roots? The prince looks bored every time Gemma opens her mouth. Well, he’s not bored every time she opens her mouth, he just hates it when she is talking. Gemma needs to get her head in the game, why hasn’t she teamed up with Queen Liz Hurley to take down Coffee Girl yet? She’s not doing a proper job of being a villainess and will get a poor performance review.

Beck is really sweet to Princess Eleanor, he even hides her diplomatic bag so that she can detox for a few hours. With Beck around, the Princess really isn’t into hooking up with random dudes, she just wants to spoon and make googly eyes.

Back at the palace, Queen Liz Hurley and her boring husband aren’t getting along. She reminds the King that he never does anything romantic such as bring her flowers like her hunky lover, Alistair Lacey, who is thoughtful and shows up with daisies. She doesn’t mention Alistair though because even the Queen isn’t that bitchy. Speaking of bitchy, Prince Cyrus reminds Prudence the Sexually Harrassed Maid that he wants her to spy on the King when he slips out at night to walk around London by himself and think about abolishing the monarchy. Prudence reluctantly goes along with it, but after a pleasant — if boring — chat with the King, she tells Cyrus to get lost. Prudence the Sexually Harassed Maid doesn’t think he’ll really have her charged with trying to poison him last week. She’s probably right, he’s got more important things to do like plotting to kill everyone so that he can be the king.

Jasper mopes around Buckingham without Eleanor, he misses playing the blackmail sex game. Jasper comes across the Queen. She spends a lot of time lounging about, shouldn’t she be at ribbon-cutting ceremonies or something? Queen Liz Hurley tells the bodyguard that she knows his secret past. It goes like this.

Queen: Jasper, I know you were run out of Vegas because you got too close to some rich guy’s daughter. How on earth did you even get a job here? Don’t they do background checks?

Jasper: The palace only has three people working security, so it was pretty easy to get hired. By the way, it wasn’t the daughter I wanted, I was really into the rich guy’s wife.

Queen: Come here and bow down to the Queen.

In Monaco, something happens with Ashok, who usually doesn’t do anything worth writing about, but I’ll mention this. Ashok has a new sports car, Gemma promises him a handy if he’ll gamble with some jerk. Ashok loses the wager and the jerk takes the car. That’s how bets work, but everyone is quite upset about this. Gemma offers the jerk sex with a virgin in exchange for the car. It goes like this.

Jerk: You’ve got to be kidding me, virgins don’t have trashy dark roots.

Gemma: Not me you idiot, one of these hideous redheads.

Jerk: Nope, nope and nope! Did I remember to say nope!

When the guy refuses to give in, Ophelia grabs a bow and arrow and goes all Katniss Everdeen on him. Has Ophelia every done anything badass before? That was badass. Score one for Coffee Girl. Gemma loses again.

Back at the palace, the King feels bad about being dull, so he gets a bouquet for Queen Liz Hurley. Too bad he sees Jasper leaving her room. The King has hurt feelings and goes off to probably abolish the monarchy and put his whole family out of a job.

As they return home, Prince Liam officially calls Ophelia his girl. She makes him say it twice to be sure, As far as his family and the press and the people of London, let them drink coffee. Gemma is depressed about the whole thing and stays behind in Monaco. She looks like she’s giving up, that’s what happens when you slack off on your villainess duties.

Beck continues to make Eleanor all weak in the knees and says that he wishes he could be with her all the time — too bad about that wife. Oh, Beck, you were doing so well. He thinks that the princess should let the world see her tender side. You’re married Beck, so STFU until you’re single. Good behavior is for the dull, by the time Eleanor is off the plane she’s back to being naughty, thanks goodness.

As if Queen Liz Hurley couldn't be more awesome, we find out that she employs a body-double so she can...