The Royals Recap: “Born to Set it Right” 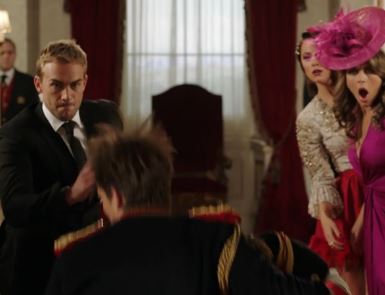 The cat is out of the bag or more accurately, Prince Robert finally is. The entire kingdom knows he’s alive and they question what’s next for the Royals. The answer? A little democracy and a whole lot of drama.

Now that the errant royal is back everyone has forgotten about #KingLiam and are all about Prince Lazarus, whose first royal duty is to keep the peace with Cyrus.

At the royal reveal for Robert’s return Helena obviously wants her first born front and center. Cyrus isn’t keen on the idea since he is technically still the king. But we all know Cyrus bows to no one and he will not give up the throne until he’s dead.

While Helena would prefer that, Robert has a more cordial approach. He sits with Cyrus in the throne room stroking his uncle’s ego because that’s the only way to his heart. Robert dazzles the unfit king with memories and convinces Cyrus that the people should vote between them. Instead they agree on a private council vote. You can tell they’re related because it was hard at first to tell who was playing who. It seemed Cyrus came up with the idea, but Robert really did. He just wanted Cyrus to think it was his idea. The rustic royal must have learned more than his drinking habits from Uncle Cyrus.

Jumping over to Robert’s private life, he texts Kathryn a meat emoji. Apparently that is code for ‘meet.’ What are we in middle school? She tells Liam about the meeting, and being the tortured soul he is, Liam tells her to go with Robert. So the girl torn between two princes literally rides off into the sunset with Robert while Liam looks on. Cue the sad music.

After her ‘date’ with Robert which basically consisted of him saying how much he missed her, Kathryn tells Liam that they have to come clean. Who gets the awful honors of spilling that secret? Liam.

So Liam decides the best time to tell his very competitive older brother about his love affair is while playing a ‘friendly’ game of darts. I was on the edge of my seat waiting for Liam to pour his heart out, and then having Robert throw a dart at younger brother’s head. Instead, Liam freezes. What a missed opportunity for a sibling showdown.

The youngest, and my favorite royal, Eleanor has a visitor. Robert’s former best friend Beck, who has always had a thing for her, is back for the celebration festivities. He’s intrigued to learn that Len has a beau in her life and he’s not happy that it’s Jasper.

Beck being the royal rude playboy he is shows up dressed in royal garb and harasses Jasper constantly saying that he’s not good enough for Len. I repeat, he’s rude. When Len finds out she goes off on Beck. You go girl.

But does that stop Beck? No.

On the day of Robert’s public appearance, Liam is tossing back a flask to numb his life. Good choice. He’s never been a fan of Beck’s and as Jasper is his number-one bro, when he hears Beck heckle Jasper Liam’s liquid courage again sends flying and hetackles the royal jerk right into the throne room in front of national diplomats.

Talk about a royal rumble.

Robert has no problem with the royal disgrace and gives the best line of the entire episode: “Okay everyone we’re going to be extremely British right now and pretend none of that just happened.”

Bravo Royals, I can tell this is only the beginning.

Cyrus: “Turns out people do have sympathy for the devil.”

Robert: “Normal people can be quite relaxing.”

Eleanor: “Class isn’t about who you are Beck, it’s about how you act.”

Robert, the former First Royal who was believed dead for the last year, has returned home. However, Liam is currently...