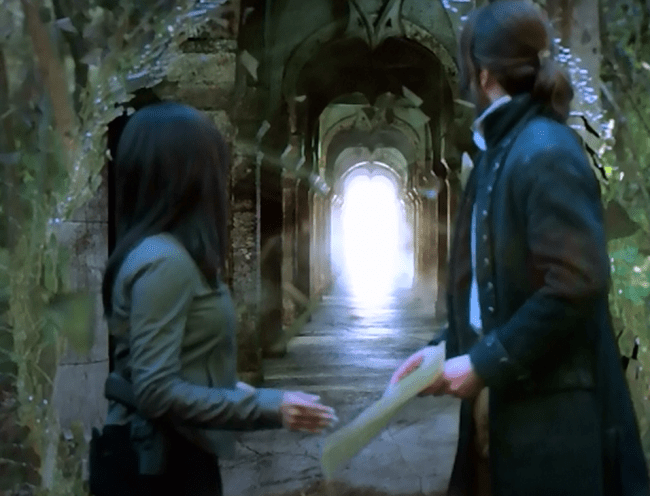 Ichabod Crane and Lieutenant Abbie Mills must save the world from the Apocalypse, which means they have to defeat Moloch. Crane also wants to save his wife Katrina, who is stuck in Purgatory. Moloch, who has had his eye on Abbie since she was a kid, wants her soul and prophesied that Ichabod would be the one to deliver it to him.  Let’s go!

If there’s one thing that makes Ichabod Crane more baffled than waking up in the 21st century, it’s suddenly finding himself in 1781 again. Or stumbling into a Revolutionary War reenactment and discovering that this is how history buffs, such as a woman named Caroline, amuse themselves. On the upside, he finds clothing it looks exactly like his old clothing, but it’s fresh. How does he pay for it? Nobody knows. He’s a damn sexy hobo.

Sin Eater Henry Parrish shows up at the cabin, in which the hobo is squatting,  with a dire message. It goes like this:

Henry: Not to alarm you, but Moloch is totes going to stir up trouble. I had a vision.

Ichabod, Abbie and Jenny: Hmm, this sounds like the prophecy from the book of Revelation.

Exposition Fairy: There will be a solar eclipse today. Remember how the Mills sisters spotted Moloch in the forest? Today is the anniversary of that encounter. There was a solar eclipse then, too. The Horseman of War is getting ready for takeoff.

This wouldn’t be a bad time to get Katrina’s help since she’s a witch, but they’d need George Washington’s map, which was destroyed because it’s too dangerous. Ichabod has to admit that he recreated a copy. He deceived Abbie, but it’s helpful now, so she’s overlooking the breach of trust.

Ichabod confesses to Abbie that he used his eidetic memory to redraw the map that they’d agreed to destroy.

Abbie: A half-truth is a whole lie.

Ichabod: All right, I lied. Yet I had no intention of using this map without your consent, but Katrina is the only one who can stop the second Horseman.

Ichabod: Admit it, you appreciate me a little.

There is another issue, Moloch’s riddle. After Ichabod defeated, Moloch appeared to him and said: “I offer this warning. A saint’s name is a sign. When you know my meaning, war will take form. And the End of Days begins… Your death is assured. You and the second Witness. I touched her soul once. Soon it will be mine forever. And you will give it to me.” Jenny doesn’t like the idea of her sister entering Purgatory. It’s Moloch’s turf, the sisters finally reconciled and Jenny doesn’t want to lose Abbie again. There is some exposition about a doll house they used to play with. It made them feel safe. Expect it to show up again.

Henry gives Team Witness Purgatory rules. The netherworld will mess with their heads and make them believe things that they wish to be true. Definitely don’t eat or drink anything offered, it’s a trap that will keep you there. They must also never forget each other. One of the great shippable moments happen. As they enter Purgatory, Ichabod reaches out to Abbie for slo-mo closeup hand-holding. It’s dreamy. There will be more ship fuel to come.

Abbie wakes up at Corbin’s cabin. She’s got a head wound. Sheriff Corbin and Andy Brooks are there in uniform and laugh off her talk of Crane. They give her The Wizard of Oz treatment. This Crane business was just a dream. She got a little banged up in a Quantico training exercise. The sun is shining, the birds are singing, jaunty music is playing. It’s everything Abbie wants to be true. She is aware that she is supposed to remember something. In Ichabod’s Purgatory, his father greets him. There is a celebration in honor of his heroism during the war—the war where he fought against the colonies. Crane’s father calls him a rum beggar, which is so sad because you can see how much Crane would like a jovial moment to bask in his father’s pride. In reality, he was disowned for switching sides during the war. The sheriff offers Abbie apple pie à la mode.

Ichabod’s father offers libations. Just as Abbie is about to take a bit, she remembers that this happy reunion isn’t real and flees the cabin. Crane nearly takes a sip and realizes it’s a dream. Abbie and Ichabod both exit the fantasy realm. Purgatory is extraordinarily unpleasant; there are faceless creatures, zombie-like lost souls milling about, skittering ghouls. It’s a hellscape. Still Crane finds Abbie but she isn’t sure that it’s really him; a fist bump clears it up. They find Katrina. It goes like this:

Katrina: No, no, no! I told you not to come back here.

Ichabod: Tell me about Washington’s Bible. Were you looking for a hug and kiss? Ain’t nobody got time or that. We have to stop the Horseman of War. I’m here to take you home.

Katrina: I should have mentioned this before, but I can’t leave without being granted forgiveness.

Katrina: I can leave if one of you stays and takes my place. I couldn’t ask for that, of course. CoughAbbieCough.

Abbie: No, remember the time, you were going to die for the cause? You didn’t ask me. It’ my turn.

Ichabod: Damnit, Moloch said I’d give him your soul!

Katrina: Sigh. Okay, here’s an amulet Abbie. It’ll protect you from Moloch. I’ll come back when we stop the Horseman.

Ichabod: “I swear to you for as long as I can draw breath.”

Abbie: “Our work is not done. You will come back for me, that I know.”

Ichabod: “Remember our bond.” Now I’m going to hug you and pet your hair. Too bad you are so tiny and I am so tall that the audience only gets to see your pretty face crushed into my chest region. I wish we both fit in the same frame. Damn, I have some big hands. I can fit your head in the palm of my hand. “I’ll come back for you.”

Abbie: I’m going to do a pretty cry.

Ichabod: “Have faith.” Okay, come on, Katrina. We gotta go.

Katrina: Good. That was all kinds of awkward. 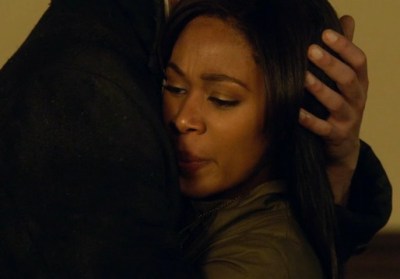 Meanwhile, Abbie trash-talks Moloch and threatens him with a tree limb or something. Oh, Abbie. Moloch just lifts her up by the neck. Abbie presses the amulet against Moloch’s skin, which surprisingly, incapacitates him just long enough to get away. She winds up in an oversized dollhouse and sees the teenage versions of herself and Jenny. They need to jog her memory about something that happened in the woods. Some memory that Moloch removed. Well? Spit it out!

Jenny, who is taking care of business all by herself, has gone through Corbin’s files, which lead her to an abandoned church. The house of worship has gone by many names. She finds a sign, which is good because we will finally get to that whole “A saint’s name is a sign,” brainteaser. She drives off and leaves a voicemail for Abbie. Is there cellular service in Purgatory? She doesn’t get to finish the call because Headless is standing in the road with a gun. The Horseman of Death shoots Jenny’s tires and the car flips over. Come on, somebody tells us what’s happening!

Katrina and Ichabod do the incantation boogaloo and end up in the present day. The Cranes finally hug and Ichabod introduces his wife to Henry. Unfortunately, her magical battery is running low so she doesn’t have the power to do much. They make it to the four white trees and all hell breaks loose. Henry uses special powers to bind Mr. and Mrs. Crane to the trees. Henry stands around mocking the Cranes and boasts that used their faith against them: The Cranes desire to be reunited and Abbie needed to know that there is a purpose to her pain. It’s your standard villainous taunting. There’s a reason Katrina can’t find the second Horseman in order to stop him from rising. He rose a decade ago. FFS! Won’t someone tell us what is gong on?!

News alert! Henry is the second Horseman aka War! Henry is also Jeremy Crane! Turns out the Four Who Speak as One did a half-assed job of the death hex. Henry spent hundreds of years in a pine box, feeding on vines. He was rescued by Moloch. God sent a Witness to stop it, but she couldn’t do it, she was just a kid after all. Yep, Abbie witnessed Moloch resurrecting Henry but made her forget. After being unearthed, Henry saw a church sign. The church was once known as—waaaait for it—St. Henry’s Parish.

Cliffhanger: Abbie’s stuck in the dollhouse. Henry has a gift for the Headless Horseman: Katrina, who gets kidnapped. Ichabod is trapped in a pine coffin. With the two Witnesses, separated, the second seal can be broken. War is ready to rumble!

Abbie's at home. Wait, what? The only time I remember seeing her at home was that brief scene in Episode...